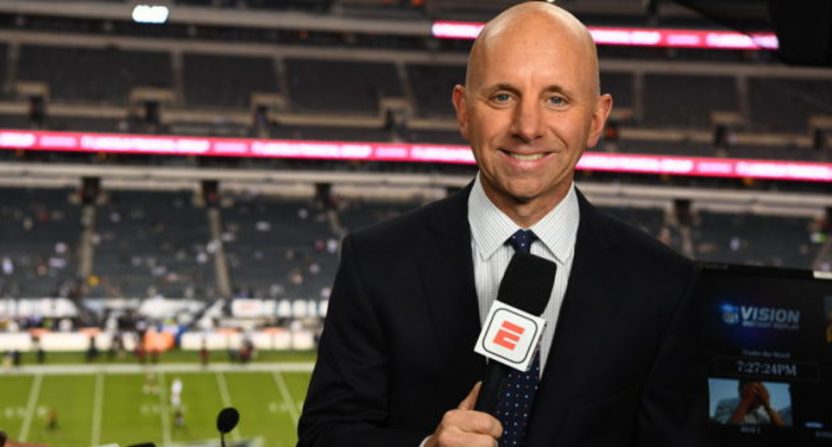 Some further notable moves there include that ESPN has officially announced the hire of Dan Orlovsky and said that he’ll be working both games and studio. They haven’t announced their full CFB studio lineup yet, but he’s expected to contribute to CFB studio shows, as well as contribute both NFL and CFB analysis to properties like SportsCenter, Get Up and ESPN Radio. On the game side, Orlovsky will be working with Clay Matvick and Paul Carcaterra this season on ESPN/ESPN2 games, including Friday and Saturday games.

ESPN has also made a prominent play-by-play announcer swap of Adam Amin and Mark Jones, with Amin now working with Rod Gilmore and Quint Kessenich and Jones now working with Dusty Dvoracek and Molly McGrath. But many of their other teams remain the same; Steve Levy, Brian Griese and Todd McShay are in their third year together, as are Dave Pasch, Greg McElroy and Tom Luginbill, Bob Wischusen, Brock Huard and Allison Williams and Beth Mowins, Anthony Becht, and Rocky Boiman.

In addition to those moves, ESPN will again use a Thursday night rotation, bringing in a guest analyst each week to work with play-by-play voice Dave Flemming and reporter Laura Rutledge. Some of the voices there last year included Herbstreit, Mike Golic, Joey Galloway, Brock Huard, and Booger McFarland; McFarland’s unlikely this year given his new Monday Night Football role, but those others could return.

Also, Jason Benetti, Kelly Stouffer and Olivia Harlan will call some Friday night games as well as Saturdays, and Andre Ware will work with Kevin Brown on ESPNU. Tiffany Greene will call the majority of ESPN’s HBCU games alongside Jay Walker, while Lowell Galindo will call Longhorn Network’s two football games alongside Ahmad Brooks. The primary SEC Network team of Tom Hart, Jordan Rodgers, and Cole Cubelic remains the same, with other SEC Network broadcasters to be announced later.

We’ll see how these moves work out for ESPN. It’s going to be a lot of similar voices to last year and a lot of teams that have carried over intact, but Orlovsky is a notable new voice, and McDonough’s return (and return to a prominent slot) is certainly interesting. There are also some departures; veteran play-by-play announcer Mike Patrick left ESPN after 35 years earlier this year (and wasn’t happy about it), and his analyst partner Tommy Tuberville, ESPN’s big splashy CFB hire last year, isn’t listed in these pairings either. And it will be worth keeping an eye on how Amin and Jones fit in with their new broadcast teams.