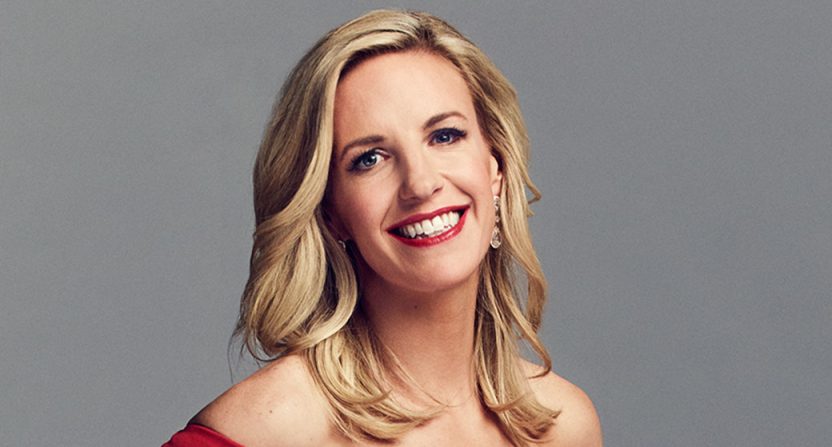 Growing up in Northern California, Aly Wagner had the unique opportunity to see Brazil play in the 1994 World Cup, where three matches were held at Stanford Stadium in Palo Alto. When she thinks of the World Cup today, she still remembers “all the Brazilian fans being in my hometown in the stands and partying the night away.”

She was 14 years old at the time going “what is this? This is amazing.”

Wagner was incredibly drawn to the men’s World Cup ever since, “but I never for one second thought I’d be a part of it.” Wagner is set to be the first ever woman to be a match analyst for the men’s World Cup in the U.S., and will be calling 10 group stage matches from Los Angeles with veteran British play-by-play man Derek Rae.

“I never had any aspirations to go into television or be a commentator, at all,” Wagner told Awful Announcing at a recent media event in New York. But after a standout career with the U.S. women’s national team, amassing 21 goals and 42 assists in 131 matches, appearing in two World Cups, and winning an Olympic gold medal, she never thought she’d have a second career in soccer as a broadcaster, especially as part of the world’s biggest event.

When casual fans will watch matches that she calls, it’s only inevitable that viewers will hear Wagner’s voice and wonder what a woman is doing analyzing a men’s match. And that’s not something Wagner can control, she said.

“You see it all the time. I could be a woman calling a women’s game, men calling a men’s game, everyone has their own affinity towards broadcasters and analysts,” Wagner said. “And so I expect to get some negative feedback, I guess you could say, but we all expect that. That’s the nature of this business, and I think more importantly it’s about the game and has nothing to do with me.”

The reason Wagner got into broadcasting was because she wanted to impart the details, nuances and intricacies of the game as she saw them to both casual and devoted fans alike.

“I wanted people to fall in love with the game the way I do and the way I see it,” Wagner said.

For those who will doubt her credentials, Wagner quickly replied that “in the history of our program, our women have gone further in big events than our men have” and that analysts have to put in the work and preparation no matter who they are or what they’ve accomplished.

“You have to get into the tactics, and the nitty gritty of the way teams approach the matches,” Wagner said. “And that’s not different for men and women.”

And getting into the tactics during this World Cup will be a special thrill for Wagner working with Rae, whose voice “is one of the ones I used to hear, and it’s imprinted in my mind.”

The pair worked a couple of practice matches together over the last few weeks, and most recently called the U.S. women’s match on Thursday in Utah against China.

“It was really interesting, really cool. He’s definitely a different style from many I’ve worked with,” Wagner said. “He’s so poetic and he knows the game. After every practice match, we got even more in-tuned with each other.”

And with so many group stage matches to come, Rae and Wagner will only get more comfortable with each other, she said. Asked if Rae gave her any advice, Wagner said it was more bouncing ideas and observations off of each other and what did and didn’t work well during their set of practice matches.

“We’re in constant contact about storylines that are evolving over the course of the past few months,” she said.

A major storyline for Wagner and Rae will be England, whom they’ll be calling during the group stage.

“Seeing if this young team with Gareth Southgate and his leadership, the way he’s bringing this unit together,” Wagner said, emphasizing that team unity was a major contributor to the Lions’ recent World Cup disappointments. “They never really broke away from their clubs and they stayed separate and isolated from the national team. And I think he’s done a really nice job of melding this group into one.”

The teams that are unified are the ones that usually make deep runs in the competition, she said. And unified broadcast booths with strong chemistry generally thrive as well, and Wagner will try to not let negative feedback or comments on social media derail that, though she said she’ll have less time than normal to go on social media for all the match preparation she has to work on.

“I hope the positivity comes out,” Wagner said, “because if you even dwell for one second on any negativity, nothing good comes of it. Those people spread negative energy, and that’s not what the World Cup is about.”

For Wagner, it’s about channeling that amazing feeling she had watching the 1994 World Cup as a teen in her hometown, and bringing that joy and her expertise of the game to the viewer at home.

“No negativity is going to stop that,” she said.