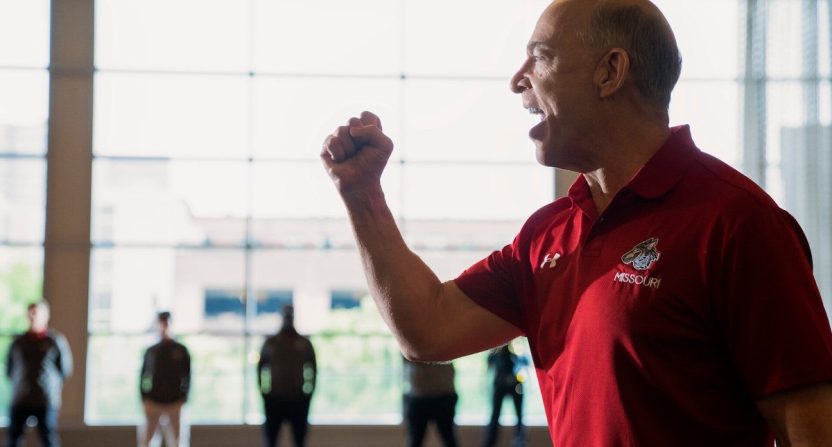 The movie National Champions arrives at an ideal time on the sports calendar. The college football regular season is over and fans await the flurry of postseason bowl games (beginning Dec. 17), along with the College Football Playoff semifinals.

Judging from the film’s opening weekend box office, however, fans would either prefer to wait for the real thing — especially with the uncertainty of going to movie theaters amid COVID-19 concerns — or aren’t very interested in watching the debate over paying college football players dramatized on the big screen. (Or people are waiting until National Champions is available to watch at home via streaming.)

Is that the right decision? Probably. National Champions is not worth seeing at a theater (with the caveat that even the worst movies are more engaging on the big screen) for the regular ticket price. Yet the film — written by Adam Mervis (21 Bridges), adapting his original stage play — puts the core debate over college athletics out there for discussion.

Should college football players be paid for providing services, often sacrificing their health, to a billion-dollar enterprise? Is the “student-athlete” concept a farce with the revenue generated by ticket sales, donations, and apparel (which includes jerseys with the players’ numbers on them)? Fans both diehard and casual might appreciate seeing the dispute in focus, albeit in a dramatized circumstance.

Among the familiar personalities providing commentary are Michael Smith, Nick Wright, Taylor Rooks, Jemele Hill, Michael Holley, and Steve Levy. ESPN’s Mike Greenberg even plays a key role (though his network isn’t mentioned, of course) when James appears on his show to explain his boycott and lay out the unfair financial landscape of college football. Football players Malcolm Jenkins and Russell Wilson (who’s credited as an executive producer) also appear in the film.

As the Heisman Trophy winner and likely No. 1 pick in the NFL Draft, James knows he has leverage and tries to take full advantage of his position. But he and his best friend can’t pull off this boycott by themselves. They need to recruit their teammates and players from the opposing Cougars to their cause, which fuels most of the narrative. As the story progresses, it becomes clearer how elaborate this plan is and who provided help to see it through.

National Champions benefits most from the impressive cast acting out the story. This is a very talky film with almost all of the scenes taking place in hotel rooms and suites. Viewers might be surprised that there’s no sports action here, though this is a story all about players not playing. But there are several monologues with characters talking about the wrongs of college athletics and the profit-generating enterprise in jeopardy. And good actors are needed to carry those scenes.

Uzo Aduba (Orange is the New Black) plays the NCAA’s off-the-books lawyer, a Michael Clayton-like fixer who digs up dirt on James to make him stand down. Jeffrey Donovan (Burn Notice) plays the NCAA executive pressuring Lazor to get his player in line. Lil Rel Howery (Get Out) is the Wolves’ defensive coordinator who would seemingly benefit from Lazor’s downfall, but is sympathetic to the players’ plight. And Timothy Olyphant (Justified)? Well, watch the movie to find out.

Many statistics are given throughout the movie, maybe too many. But Mervis clearly did his research and presents it well. Maybe this movie would’ve benefited from the animation and graphics that 2010’s The Other Guys used to explain Ponzi schemes and the disparities between CEOs and their workforces. (Adam McKay’s take on college football would’ve been intriguing…)

Should a resolution be expected here? Did fictional college football players and executives accomplish what their real-life counterparts haven’t? National Champions isn’t a fantasy.

But the movie does present an important debate, one that should be considered as millions of us tune in to watch schools and their football teams clash on the field during the next month, as coaches jump to other programs for hundreds of millions of dollars, leaving behind the players responsible for their success.