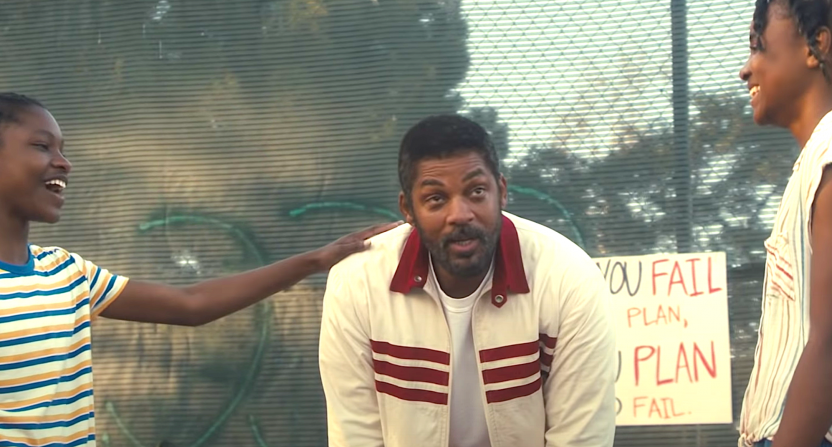 It’s been two years since a movie project starring Will Smith as Richard Williams, father and coach to Serena and Venus Williams was announced. Titled King Richard, that film is now on the verge of hitting theaters.

Smith revealed the trailer on Instagram Wednesday, just before Warner Bros. Pictures set its marketing machinery in motion to promote the first look at the film. With a Nov. 19 release date, it’s apparent that the studio believes Smith and the movie could be Academy Award contenders.

Warner Bros. couldn’t have realized that the King Richard trailer would be released amid a national discussion about athletes’ mental health in light of gymnast Simone Biles’ decision to withdraw from the Olympic women’s team gymnastics final. Watching clips from a story about a father driving his daughters hard to become world-class athletes and cultural icons — to the point that it concerns other parents — might not quite feel right to some at this moment.

But maybe those feelings will change in the four months before the film’s release. Take a look at the first trailer for King Richard:

Directed by Reinaldo Marcus Green (Joe Bell, the First Step series for The Players’ Tribune), the film also stars Jon Bernthal (The Walking Dead) as Rick Macci, and Tony Goldwyn (Scandal) as Paul Cohen. Cohen was hired by Richard Williams to coach Venus and Serena when they were young girls (7 and 6 years old, respectively). Macci, who runs a renowned tennis facility in Florida, trained the Williams sisters to become top-ranked players.

“One of the greatest honors as an actor is to be able to celebrate someone’s legacy while they’re still here creating it,” Smith said on Instagram. “I’ve gotten to do it a few times in my career playing [Chris Gardner] and [Muhammad Ali] and every time it’s a fulfilling and expansive experience beyond compare.”

Smith called his upcoming film “The origin story for some REAL DEAL superheroes,” which follows Williams raising his two daughters with the goal of becoming legendary tennis stars. As Williams says in the trailer, “I wrote a 78-page plan for their whole career before they were even born.”

Whether or not the story will show the sisters feeling the pressure of “representing every little Black girl on Earth” and being “the next two Michael Jordans” remains to be seen. But young actors Saniyya Sidney (Venus) and Demi Singleton (Serena) have some formidable roles to take on, not just from a performing standpoint but depicting elite tennis players on the court.

Will the tennis sequences be convincing? Might the film use archival footage to show Venus and Serena’s most memorable matches? Authenticity can be important with movies such as this. Or will the majority of the story focus on their early careers since this movie focuses on Richard Williams?

King Richard debuts Nov. 19 in theaters and on HBO Max.