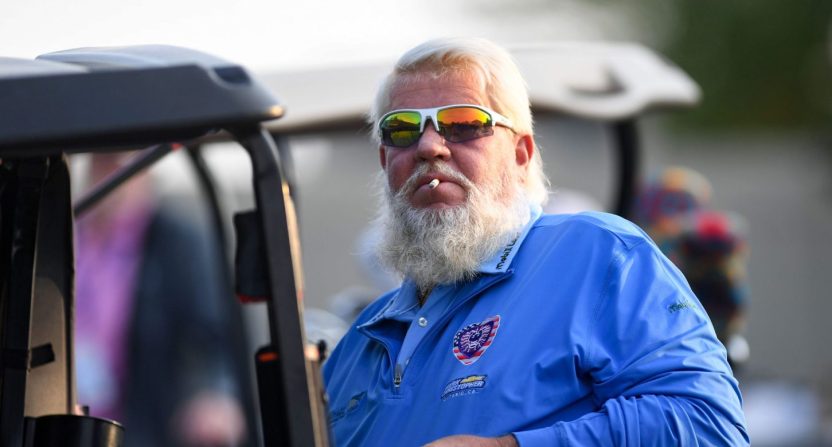 One of the more interesting athletes in sports history is getting their own movie as Jonah Hill is reportedly set to play John Daly in a biopic.

According to Jeff Sneider from Above the Line, Hill will produce and star in a film titled The Bad Boy of Golf set to be directed by filmmaker Anthony Maras, whose previous works include Hotel Mumbai.

“The biopic will examine the excesses, scandals, and athletic achievements of the PGA Tour golfer, who is considered by many to be the Bad Boy of Golf,” Sneider wrote in his report on the upcoming Daly biopic.

At 56 years old, Daly (seen above at the EMC Championship Pro-Am of the Sanford International Golf Tournament in Sioux Falls in September) is well past his golfing prime, but his legendary status and fame lives on. Daly’s grip-it-and-rip-it style of play, while representing everything the prestigious game of golf scoffs at, built him into a flawed folk hero who remains a celebrity, albeit one who younger generations of sports fans may not know about. But considering his ability to capture the sports world through his “Bad Boy” persona along with an endearing charm that often garnered forgiveness, Daly is certainly a character worthy of the big screen.

Hill famously starred in the sports biopic Moneyball and earned an Oscar nomination for his supporting role. Although Hill didn’t exactly resemble Paul DePodesta, the sports executive his Moneyball character Peter Brand was meant to portray, from a physical standpoint, it’s easy to envision the 38-year-old Hill morphing into a younger Daly.

In 2009, Daly offered up two suggestions of who should play him in a future film should one be made. According to Daly, he envisioned Kevin James or Matt Damon as the actors to play him in a movie.  Personally, I think it’s great that Daly isn’t directing his own biopic and I remain more excited to see Hill’s portrayal of the legendary golfer.

[Above the Line; photo from the Sioux Falls Argus Leader, via USA Today Sports]