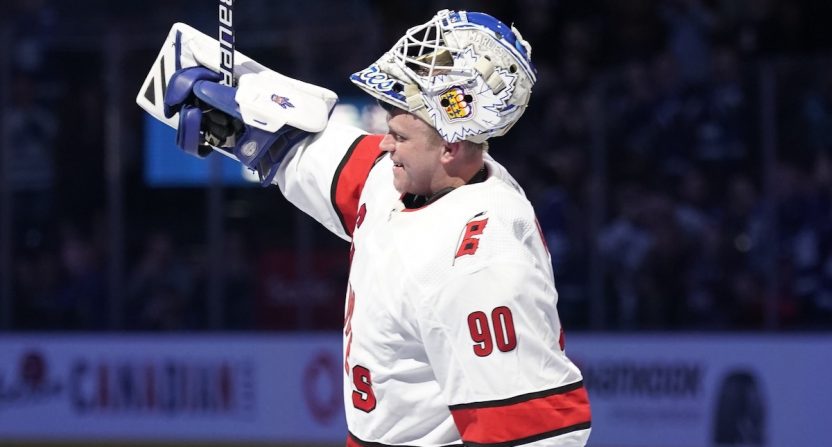 The improbable story of David Ayres going Zamboni driver to emergency goalie for the Carolina Hurricanes seemed like it could inspire a movie. Disney agrees, developing a biopic about Ayres that fits nicely into its catalog of inspirational sports films.

Ayres’ one-night stint as an emergency goalie happened just over a year ago (Feb. 22, 2020) in Toronto when the Hurricanes lost both of their netminders to injury. Designated as an available goaltender in case of injury by the Maple Leafs, Ayres suited up for the visiting NHL team.

Though he allowed goals on two of the first three shots he faced, Ayres stopped the next seven attempts and played a total of 29 minutes, helping the Hurricanes to a 6-3 victory.

What a way to make a debut, Dave Ayres pic.twitter.com/1opzaBgR4t

Related: After David Ayres, the NHL is trying to squash the fun out of its emergency backup goalie rule

In an interview with Sportsnet’s Luke Fox (via Yahoo Sports’ Kyle Cantlon), Ayres mentioned that he signed a movie deal with Disney after being approached by late-night host James Corden about producing a film based on his story. That compelled Ayres to find an agency to represent him, only to discover that plenty of production companies were already pursuing a biopic project.

“Then I hooked up with CAA (Creative Artists Agency). They said to me, ‘You wouldn’t believe the amount of production companies that have come to us already asking to do this film. It’s insane.’ They narrowed it down to 24 at one point, and then we narrowed it down to 12. We listened to 12 pitches from all the different people.”

Ayres will be directly involved in the movie’s development as a producer and writer, something Corden enticed him with while pitching the movie project. He told Fox that COVID-19 restrictions have slowed the production down. But once the movie’s script is written, it’s expected to be a two-year process to get the film made.

The NHL will likely never see a story like Ayres’ again after the league implemented a new rule mandating that teams carry three goalies between its active roster and taxi squad. So pulling an emergency goalie out of the stands, which is essentially what happened to Ayres, won’t happen again.

Disney has become the go-to studio for inspirational sports movies, true-life stories of athletes overcoming adversity to triumph, some of which have showcased historical figures in sports. Such stories provide the ideal family-friendly programming upon which Disney has built its brand.

Earlier this year, Safety, telling the story of Clemson football player Ray McElrathbey premiered on streaming service Disney+. That joined a vast collection of feel-good sports films including Miracle, The Rookie, Invincible, and Million Dollar Arm. Ayres’ story, whether it’s released in theaters or on streaming, will be a comfortable addition.