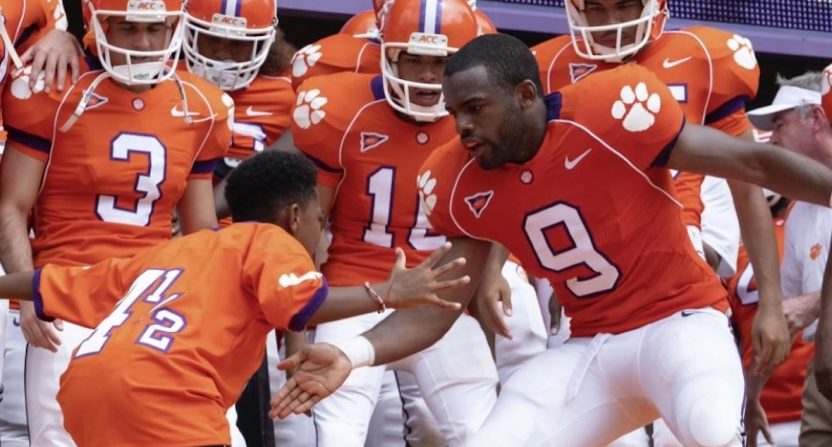 And with the Disney+ streaming service, the studio has a new outlet where these sorts of movies fit perfectly.

Safety lines up nicely with Disney’s other sports biopics, telling the story of Ray McElrathbey and the 2006 Clemson University football team. Filming on Clemson’s campus and during a game in Death Valley (Clemson Memorial Stadium) gives the movie an authenticity that Tigers diehards — and college football fans –will surely appreciate.

Director Reginald Hudlin might be best known for comedies like House Party and Boomerang. But his last feature film was 2017 was Marshall, about eventual Supreme Court Justice Thurgood Marshall, so he knows how to get right into the narrative, keep the story moving, and fill in the backstory along the way.

(That’s likely helped by screenwriter Nick Santora, who typically writes plot-driven crime dramas such as Scorpion and Prison Break. An uplifting sports biopic is an intriguing departure for him.)

The story begins with McElrathbey (played by Jay Reeves), fresh off the bus for his first day on campus. By following him as he’s introduced to university life and a big-time football program, viewers quickly learn what college football players regularly experience in juggling practice, classes, playbook and academic study, and attempts at a social life.

Already overwhelmed as a freshman, McElrathby suddenly has to deal with much more when he finds out that his younger brother, Fahmarr (Thaddeus J. Mixson), is left on his own because their mother’s drug addiction has put her in jail. Needing to take care of his brother (and keep him away from the neighborhood drug dealers who would love to recruit him), Ray brings Fahmarr to live with him in his dorm room.

Much of the movie becomes a caper from there, as Ray tries to keep his brother hidden from resident advisors, classmates, teammates, and coaches for fear of getting in trouble with authorities, losing his scholarship, and being expelled from school.

Naturally, trying to be a parent, student, and football player at a major college program proves to be overwhelming for Ray. He misses exams, frequently makes mistakes in practice and disappoints his coaches, and jeopardizes his budding relationship with a fellow student (Corinne Foxx).

This story doesn’t really have a villain, yet tries its best to portray the NCAA as a dispassionate organization that fails to understand how its rules affect student-athletes. (And really, is anyone watching the movie going to sympathize with the NCAA?) Those unfamiliar with NCAA rules compliance get a taste of the rigid lack of empathy toward human beings, many of whom come from difficult backgrounds, and the issues coaches have to face that go beyond football.

Ultimately, the main conflict is whether or not Ray will be granted a waiver that allows him to play football while Fahmarr receives aid from coaches, families, and the surrounding community. Yet while Ray has everything to lose and encounters plenty of obstacles, it never quite feels like he’s in true danger of doing so. For instance, wouldn’t missing an exam make him academically ineligible? Yet that possibility is never mentioned.

Fans might want a bit more on the football side. Only two of Clemson’s first three games of the 2006 season are part of the story, culminating in the “Bowden Bowl” pitting then-coach Tommy Bowden (Matthew Glave) against Florida State and his famous father, Bobby. But this is a great advertisement for the Clemson football program (and gave up licensing fees in favor of the exposure from a Disney movie),

Safety is far more concerned with hitting on the theme of “family” within a football program and the importance of that concept to the main character. That makes it a movie families can watch together during the holidays, while also bringing a sense of normalcy to college football fans who miss the atmosphere of a packed Death Valley and a big game against a top rival during a tumultuous season affected by COVID-19.