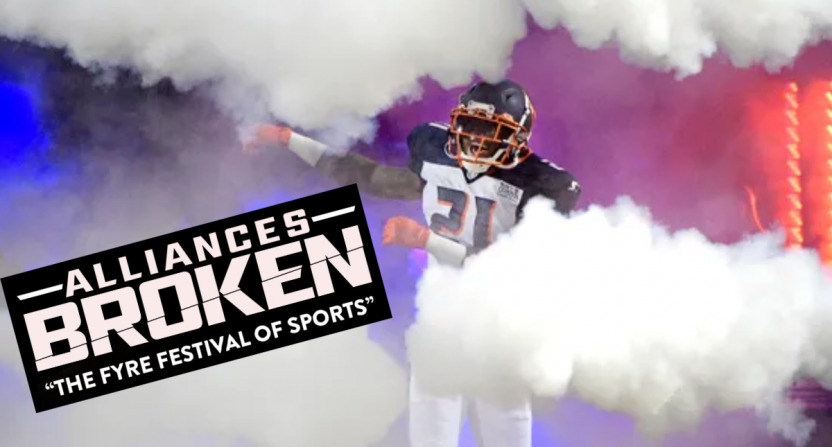 Filmmaker Steven Potter didn’t originally intend to make a documentary about the Alliance of American Football. Working in the Orlando area for Fox Sports, he was hired by some players trying out for the area’s AAF team to create video for social media, helping to promote themselves and the upstart league.

But it quickly became apparent to those players and team employees that what AAF co-founder Charlie Ebersol and other league officials were selling wasn’t becoming reality. The situation deteriorated so rapidly that the league couldn’t even finish its first season before folding. That deception and path toward a quick downfall is the story of Potter’s documentary, Alliances Broken, which is now available on streaming platforms.

“The biggest thing that was kind of sketchy was [the Orlando Apollos] had this big promo, ‘Come out and watch out first practice and see all the stars,'” Potter told Awful Announcing.

“The practice was supposed to be held at Camping World Stadium, a really nice stadium in Orlando, and two days before it happened, they ended up moving it to Jones High School. It was the only field we could get access to. So right there, everyone was like, ‘Whoa.’ That was the first sign that this might be smoke and mirrors. After that, it was all downhill.” 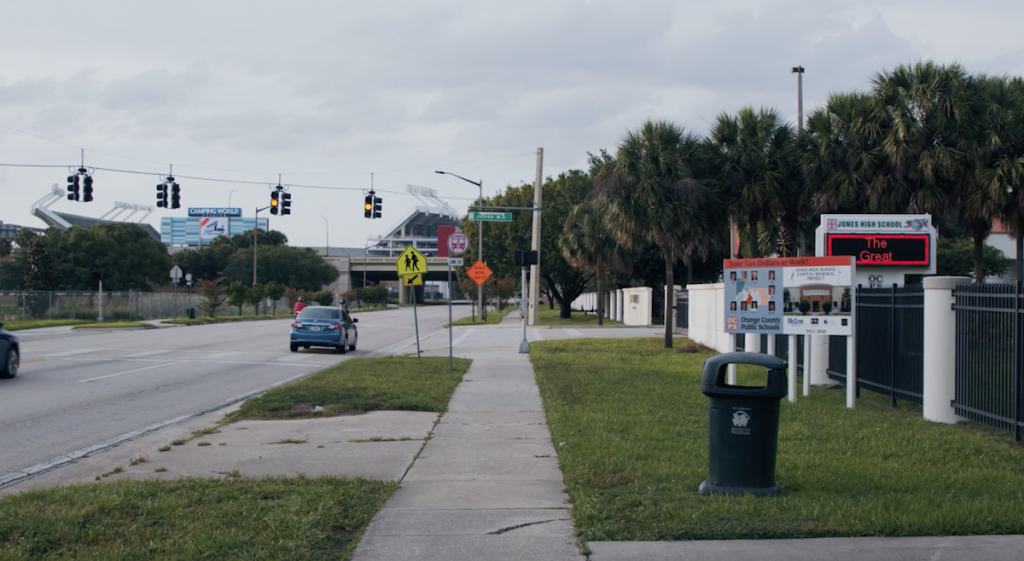 As fortunes for the league began to spiral downward and financial troubles became increasingly obvious, including players not getting a paycheck after Week 2, the disconnect between what the AAF was promoting (such as TV ratings) and what employees were seeing compelled players to suggest that Potter should make a documentary about the entire experience.

Though he didn’t follow these athletes with the intention of making a film, Potter had those ambitions coming out of school. At Fox Sports, he helped edit footage from the Tampa Bay Rays to make TV documentaries. He fell in love with the process and wanted to make those sorts of films as a full-time career. And with films previously made on the XFL (directed by Ebersol) and the USFL, it was clear that people had an appetite for such content.

With plenty of footage from practices and promotional events held at local bars and grills, Potter (who previously made a feature film, The Diary of Emily) realized he had the material to put together a film. He just needed more interviews and found that people were more than willing to talk.

“Let me see if people are willing to talk to me for a documentary,” said Potter. “Little did I know that everybody I met during the couple months that the AAF was around, they were lined up, ready to do interviews. Everybody wanted to share their story. It was kind of crazy.

“I thought it was going to be difficult, like an outsider looking in. How am I going to get these people to talk? But then people started telling others from different teams, ‘Hey, you gotta talk to this kid; he’s doing a documentary on the AAF.’ That’s how it started.”

Altogether, Potter did 42 interviews for the film, talking to players, executives in ticket sales, tourism managers, athletic trainers, gameday operations directors, and even team presidents. He also received more footage from vloggers and YouTubers who were filming their gameday experience and making commentary videos about the AAF. Altogether, the director says he had close to 300 hours of footage to work with.

Potter did reach out to some of the bigger names associated with the league including Troy Polamulu, head of player relations, and Michael Vick, who was supposed to be the offensive coordinator for the Atlanta Legends but left two days before the season opener, and executives. He also attempted to contact Tom Veit, the league’s head of business operations. Those messages were never returned and Potter concedes that even the higher-profile figures were misled. 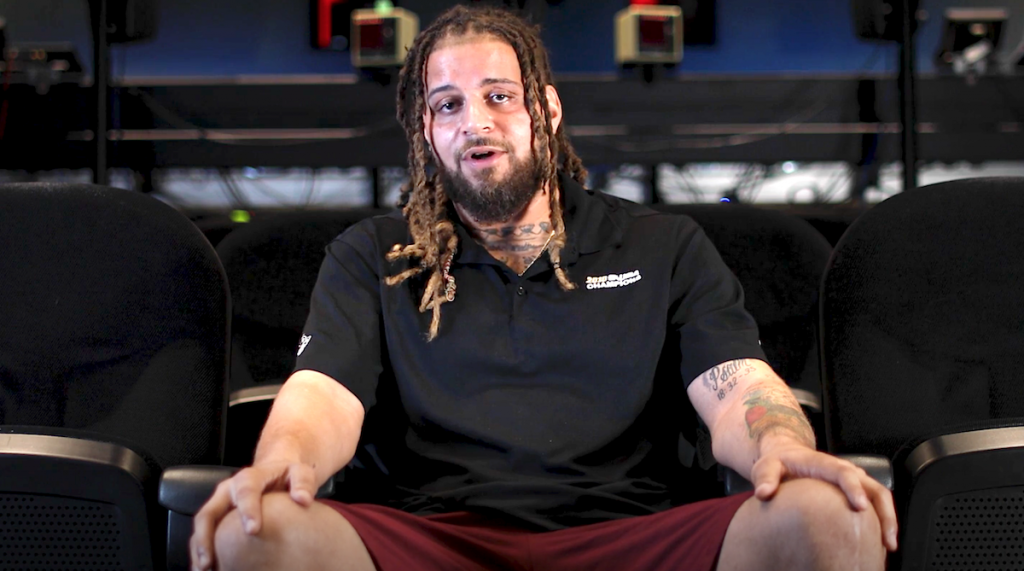 Potter’s initial premise was to tell the story of the AAF — the league, the people involved, and what happened — from start to finish. Yet as he conducted interviews and looked through the footage available, he realized that he wanted to tell the personal stories of the people who were affected most by the AAF’s implosion and lost jobs, not investors who lost money.

“I wanted these guys to tell their stories and not be overclouded by some hotshot executive that was like, ‘Hey, sorry — we lost a bunch of money and it’s OK. But we’re gonna do our best to bring it back,'” Potter said. “I didn’t want any more smoke to be blown. I wanted all these interviews to give everybody the chance they deserved to tell their story, how this league was also sold to them. The people who worked in the football offices day-to-day, they weren’t the bad guys.”

With his first documentary now finished and showing to the public, Potter wants to continue making nonfiction films, especially with cable and streaming networks providing more outlets to filmmakers, and is currently developing two projects. One is about East Coast surfing and the culture surrounding it. The other is closer to Potter’s heart. 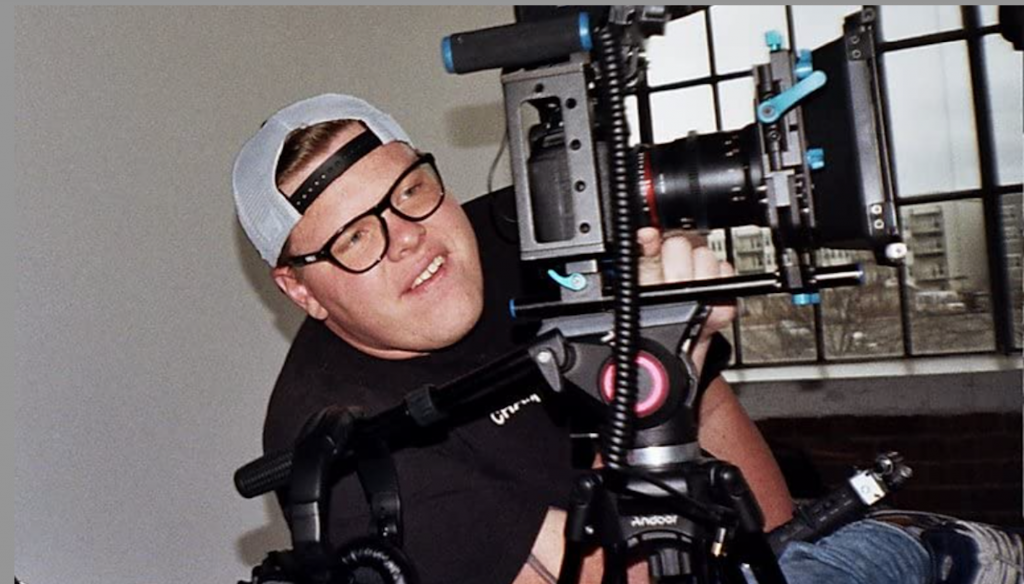 “One of the topics I want to talk about next is definitely the LGBTQ+ issues in America,” said Potter. “A really good friend of mine is going through a transition process and he wants to share his story with the world, so we decided to team up and start to document that process.”

For now, however, Potter hopes people see Alliances Broken and want to learn about those who were deceived, who lost their livelihoods, who were left with obligations they couldn’t fulfill.

“I hope I did justice for the people that worked in this league,” he said.

Alliances Broken is currently available on many streaming platforms, including Amazon, Apple TV+, and Google Play.