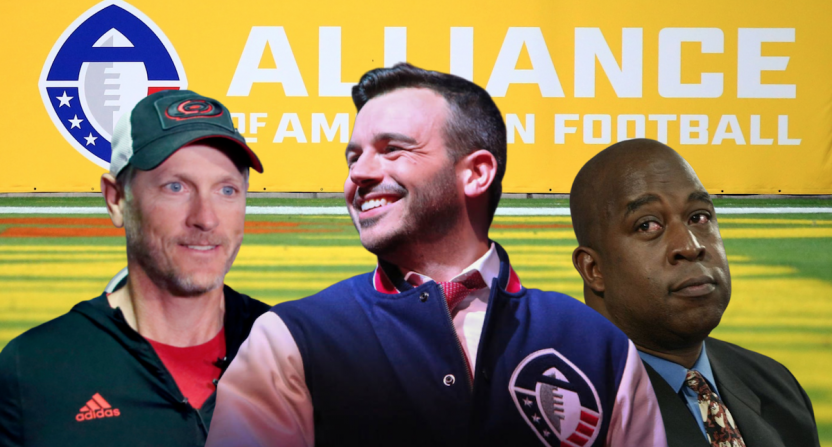 The Alliance of American Football gave us one of sports’ most spectacular crash-and-burns in recent years when the spring professional league shut down before finishing its inaugural season.

Two years later, the AAF is a cautionary tale worth heeding as other spring football endeavors such as the new XFL, The Spring League, and revived USFL attempt to launch. The league’s swift rise and fall is also a story worth marveling over, looking back at how it failed so largely, so quickly.

Filmmaker Steven Potter was originally hired by players in the Orlando area to film video for social media as they tried out for the Orlando Apollos. Following UCF alums like defensive back Rannell Hall and offensive tackle Chris Martin, he helped promote the team’s launch through those getting a shot in the upstart football league, hoping to create a local connection with fans.

But the story Potter thought he was following soon changed as the AAF’s financial difficulties and organizational shortcomings became apparent. Players that were once excited became wary and disenchanted.

As the situation deteriorated, Potter ended up with a lot of footage that likely wouldn’t be seen with the league folding. So he decided to make a documentary chronicling the AAF’s downfall and how it happened. That film, Alliances Broken, is now available on streaming platforms.

Potter interviews a variety of players and front office employees, all of whom joined the AAF with optimism and excitement for the opportunity presented to them. Co-founder Charlie Ebersol sells a venture that appears to have a solid plan with investors and TV partners lined up, payments and incentives established for the players, an emphasis on health and safety, and a unified initiative between league owners (not individual team owners), players, and fans.

Related: The AAF reportedly paid Marshawn Lynch $5,000 in quarters for an exclusive interview that never aired

Perhaps more impressively, some big, familiar names faced the public to sell the eight-team league to media and fans, and to the players themselves. Former Bills and Colts general manager Bill Polian was a co-founder. Orlando coach Steve Spurrier tirelessly promoted the team on local and national TV channels and to prospective season-ticket holders.

Mike Singletary, Rick Neuheisel, and Michael Vick were also coaches. Former Steelers receiver Hines Ward was a player relations executive. Jeff Fisher was in charge of football strategy. Jared Allen and Justin Tuck promoted the investment made in players, not just with three-year contracts, but in safety measures, health care, and opportunities for education.

Furthermore, Ebersol and league executives pushed the idea that the AAF was a tech company, not just a football league. The league’s app was promoted as innovative and visionary, allowing for in-game betting (in partnership with MGM Resorts). Fans would be able to follow the action, watch in-game videos (with coaches, players, and officials mic’ed up), and see plays on the app and website in seconds, presenting a more interactive experience than the NFL allowed.

Related: The AAF mic’d up their replay official, which the NFL should immediately duplicate

But through insight from reporters including Sports Illustrated‘s Conor Orr and Daniel Kaplan of Sports Business Journal, the reality behind the AAF’s dazzling facade is quickly revealed. Ebersol bragged about having $20 million in place to launch operations, but such a venture requires funds nearing $200 million. He touted CBS as a TV partner, but games were largely shown on CBS Sports Network and the league initially had to buy time on the networks. (Though TNT and NFL Network also broadcast games.)

Potter also speaks with top team executives, account managers, and sales reps who explain that teams were relentlessly promoting the team, but had no budget or radio or TV ads. Teams weren’t selling any tickets, but giving them away to fill stadiums at half-capacity (or less). Fans and players’ families were alienated by exorbitant prices for merchandise, comparable to the cost of NFL apparel.

The stories go from comical to baffling and eventually become heartbreaking. Hundreds of employees, some of whom moved cross-country for an opportunity to work in professional football, lost jobs. Virtually everyone involved, even at the higher executive level, felt deceived and scammed. Unfortunately, the documentary probably goes on too long in sharing these accounts, but the repetition emphasizes the damage done.

Ebersol is an easy villain to point to because of the scheme he sold to everyone while living large. Trying to beat the XFL to market required too many financial shortcuts. Prominent investor Reggie Fowler was charged with fraud. Billionaire Tom Dundon, owner of the Carolina Hurricanes, appeared to be a financial savior for the league but soon realized the AAF was a bad investment. And he did nothing to compensate employees for pay they never received.

Related: AAF inaugural game sees Mike Bercovici lose his helmet after a massive hit, stay in, get praised for toughness before “they’ll take a look”

As could be expected, Potter doesn’t get interviews with any of the major financial players. Nor does he talk to any of the prominent former NFL players that used their profiles to sell the AAF, and were probably paid well for those endorsements. That’s probably the most glaring flaw of Alliances Broken. Yet those responsible for the league’s failure are unlikely to admit what they did wrong or confess to selling a dream that was never truly attainable.

Perhaps this documentary was made too soon after the AAF’s demise. Yet Potter probably also felt it important to get the story out there before it began to fade with time and other spring football leagues launched, maybe with future success. But the film should be intriguing to viewers curious to learn more about why the AAF failed and the many people affected by a promise that was never going to be fulfilled.