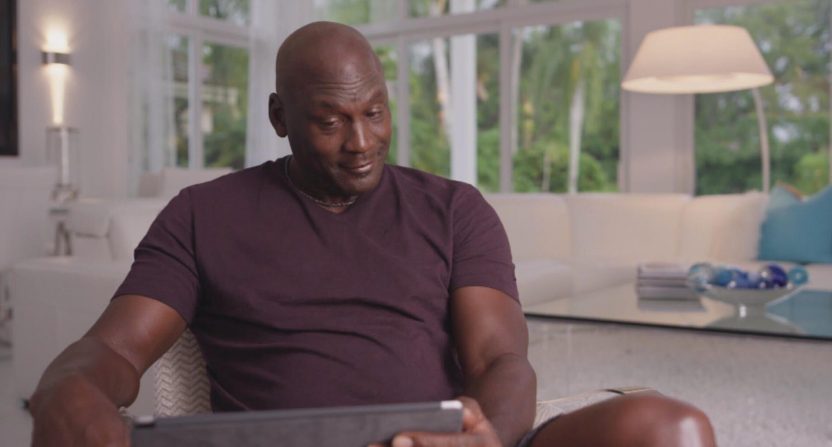 The Last Dance is a social media phenomenon the likes of which the sports documentary space has never seen, and likely will never see again. With roughly six million viewers tuning in each week in the U.S., and an unknown international audience watching on Netflix, a large part of the experience has been the social media interaction during the airings. Every Sunday night, The Last Dance steamrolls all other topics on social media with memes, gifs, photos, and clips emanating from a wide spectrum of social media accounts.

Despite the undeniable virality of The Last Dance, Awful Announcing has learned that multiple popular Twitter accounts have received DMCA complaints for posting clips of the show. Awful Announcing’s own Twitter account — which has been live-tweeting a few clips every weekend — was also targeted with one of these requests this past week for a clip that aired weeks ago. The complaint was our first DMCA complaint, which carries no real punishment. But for other accounts who have been flagged in the past, the DMCA complaints have had a more significant effect with multiple accounts being suspended indefinitely.

Awful Announcing has reviewed a handful of registered complaints, all of which were filed by ESPN. All of the clips in question follow the general accepted principles to be considered legal fair usage: clips under 30 seconds, and not monetized or rebranded. What’s strange is that ESPN has historically not had any issues with this type of content on social media. We frequently see ESPN talent, corporate accounts, and executives often retweet clips of their content posted on social media by non-ESPN accounts. The recent crackdown raises the question of if there’s been a shift in the legal interpretation of fair use at ESPN, but a source told AA that’s not what’s at play here.

So, uh, ESPN hit @cjzero with a DMCA claim for a Last Dance video… So my account is suspended again

The source told us that despite the claims being put forth by ESPN, there has been no formal policy change. The source added that this new zealous (or perhaps overzealous) policing seems to pertain to only The Last Dance, which points the finger at its other production partners. While almost all ESPN content is exclusively owned or produced by ESPN, The Last Dance was a collaboration between Netflix, the NBA, Mandalay Sports Media, Jump 23, and ESPN.

What seems likely is that one of the other production partners may be pushing ESPN to ratchet up their enforcement of clips to a level not seen for ESPN, or to be honest, any other sports network. A source who oversaw digital rights clearance and enforcement at a different sports network explained to me, “While ESPN probably doesn’t care, the fact is that the clips are coming from their airings of the content and have their logo on them at the bottom of the screen. They are the ones who have to file the claims despite preferring to look the other way.”

When I asked their thoughts on the new enforcement standard, our source with many years in digital rights and enforcement strategy shared, “I would be pissed. This is a waste of time and resources and is counterproductive. You can’t stomp out all the clips and even if you could, this is not productive in any way… It’s 2020, not 2008.”

It's kind of interesting ESPN would send a DMCA for The Last Dance… is everything fair game now…Are Sportscenter/First Take clips going to get DMCAed too? https://t.co/YwKGB6mox1

The most obvious candidate of who would want less clips of The Last Dance would be Netflix, where the docuseries airs internationally (but often is released hours after it first airs on ESPN in the U.S.). Perhaps Netflix believes that clips on social media hours before the streaming service’s release of episodes somehow could hurt viewership (you don’t need a MBA to tell you that doesn’t make sense). Netflix refused to comment and referred our inquiry to the NBA, who also had no comment but denied any role in pressuring ESPN to enforce clips online. The NBA has historically been the league that is the the most easygoing on digital enforcement. A call to Mandalay Sports Media went unreturned. So it’s essentially like when you have some leftover cheesecake in the fridge, then it’s gone in the morning and your three roommates all deny eating it.

Awful Announcing’s legal team will review the DMCA complaint to potentially challenge, but other Twitter accounts aren’t as lucky. While many of the accounts we talked to were a little skittish to go on record, we spoke with CJ Fogler, whose account with over 55,000 followers has been indefinitely suspended.

On if this was the first DMCA complaint by ESPN:

Yes, I’ve posted hundreds, if not thousands of ESPN clips and they have never claimed one before- including on ESPN original programming, which is why I felt comfortable posting it. The clip was the 12-sec segment where a French audio tech asks MJ for an autograph, and Jordan looks to a staffer for help. It was claimed over a week after that first episode aired. The account is followed by a number of ESPN production staff and on-air people who have tweeted and retweeted ESPN clips I have posted in the past, even including ESPN’s own social accounts.

I have reached out to twitter sports and directly to the ESPN DMCA claim filer as that part of Twitter’s process. Neither has responded. As I noted to you in DM, it is ironic that after not responding to my requests on twitter, the @twittersports account quote tweeted a GIF from The Last Dance from @cjzer0.

How many accounts are you aware of that received similar notices?

If anyone is looking for @carlisle – he got hit by a DMCA for Last Dance as well, find him at @not_carlisle

I know of at least four other accounts that have had videos from The Last Dance DMCA’d, including AA.

Do you think short clips being posted hurts or helps with viewership for The Last Dance?

Honestly I don’t know that it makes a measurable viewership difference, but it does definitely increase the social chatter and impact of the shows. As far as I know, the ESPN account did not tweet the video I did, which makes it more curious as I’m not diverting attention from their social either. What makes these types of shows fun and impactful, aside from the subject, is sharing those types of moments and seeing other people react to them. Claiming a 12-sec video in a 10-hour documentary seems almost counterproductive when the posting of the video results in numerous blog posts and publicity for the shows.

The Last Dance has been the rare positive sports media story during this pandemic. The director of the docuseries, Jason Hehir, said as much in our interview earlier this week, and attributed a lot of that positivity to the escape from reality that was steeped in nostalgia and shared on social media. I get the sense that ESPN feels the same way, and is having their arm twisted to enforce an overzealous, draconian, resource-wasting, and counterproductive exercise.

When I see other accounts get their suspensions lifted… pic.twitter.com/BRKK9aQfnt

With four episodes to go, we’ll see if clipping of The Last Dance throttles down, as well as what other major accounts finds themselves in Twitter jail over posting The Last Dance clips. Either way, it’s an unnecessary negative distraction to something that has thus far been received in close to a universally positive way. While The Last Dance benefited greatly from having multiple production partners, this is probably one of the drawbacks; clearly one of them is out of step with the modern-day digital landscape and the long-accepted standards between media companies and their viewers.

Note: Feel free to DM @Bkoo with more info on this story. We refrained from posting any clips currently on any social media platform so to not have any other accounts targeted. We also deleted all of our other tweets with clips from the show, some of which were our most-viewed tweets over the last month.