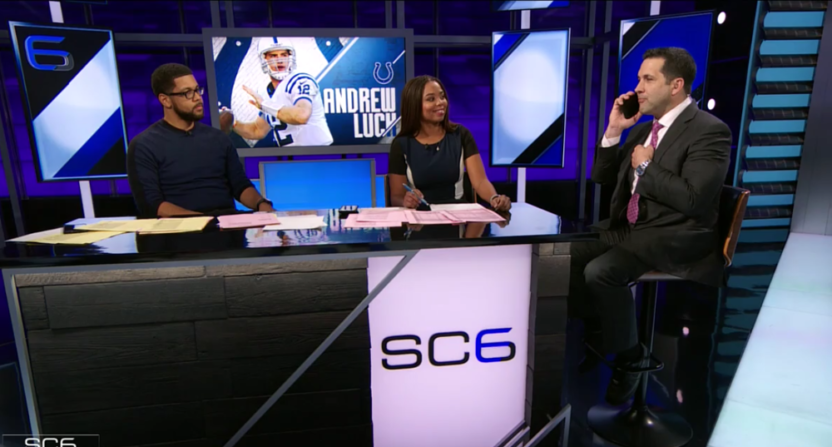 SportsCenter has probably seen more reinventions and rebrandings in the past few years than it had during its previous 30 years combined. In fairness, the flagship program of ESPN has had to go through this rapid evolution because of the way sports media is now consumed in 2018. In the 2010s, the traditional highlight show quickly became obsolete as different forms of social media continued to grow.

No longer were fans waiting for SportsCenter to get their news and information, they could get it from whatever app was on their phone. ESPN transitioned from SportsCenter being more about news and highlights to emphasizing personalities and analysis.

Some of those transitions have worked better than others. In the morning, for instance, SportsCenter has been relegated to second-fiddle status on ESPN2 behind the morning shoutfest of First Take. In the evening, Scott Van Pelt has made an hour of SportsCenter his own with the SVP-branded edition that has succeeded in establishing an audience and led to an extension for Van Pelt at the network.

But the most polarizing change SportsCenter made was taking the 6 PM edition that mostly focused on the news of the day and getting viewers ready for the evening’s sports lineup and replacing it with “SC6” hosted by the “His & Hers” duo of Michael Smith and Jemele Hill. It was unlike any other version of SportsCenter that had ever aired before.

While viewers may have had a range of different emotions about the format, the show drew more headlines for what happened off the airwaves, thanks to Hill’s tweets about President Donald Trump. After a few months of wondering about what the future might hold, Hill left the show to focus on writing for The Undefeated and then Smith inevitably departed.

Critics of the show would expect ratings for the show to increase, but that simply hasn’t happened. In fact, ratings have been pretty much flat, if not down just a tick.

The big question for ESPN is what to do now with the 6 PM SportsCenter? Even before the network went to SC6, they tried a very fast-paced news and information show featuring Lindsay Czarniak as a solo anchor, but she is no longer with the network.

Does ESPN go with another personality-driven show? Do they stick with more analysis and opinion? Do they go back to leaning on their analysts and reporters? Do they try something totally new?

Perhaps the bigger picture question is this: Does it really matter?

When ESPN announced Smith’s departure, the network revealed a list of current SportsCenter anchors that would be hosting the show on a rotating basis, including Matt Barrie, Michael Eaves, Kevin Negandhi, Elle Duncan, Linda Cohn, John Buccigross, Adnan Virk, Jay Harris, and John Anderson. The network said that permanent anchors would be named at a later date.

Think about it this way: what can ESPN really do at 6 PM that would move the needle now? After going to such a unique format with SC6, it’s hard to even envision another rebranding effort that ESPN would attempt to undertake at this point. Imagine the network pouring so much into trying to establish SC6, seeing it go away so soon, and then re-doubling those efforts to try to do it again.

Beyond going to an episode of SportsCenter that has 12 different anchors on the screen at one time, there’s not too much ground left to cover at this point. Is it really worth it if ratings are still going to be stagnant?

Perhaps it’s just the difficulty of getting anything to engage the audience at 6 PM ET. In late-night, the SVP episode makes sense as it airs at midnight ET and people are used to watching more laid-back shows with hosts like Colbert, Fallon, or Corden at that time. Even the morning show edition of SportsCenter AM makes some sense alongside options like The Today Show or Golic & Wingo or even the new Get Up show that ESPN will air.

But what do you do at 6 PM? It’s a question that ESPN’s competitors have especially struggled with in recent times. There seems to be constant turnover in those hours or completely unappetizing options. (Hello, Speak for Yourself.) There are really no highlights to show and you’re pretty much locked into talking about whatever news has broken that day or whatever is on the calendar for the evening.

So maybe the best answer for ESPN to try to rebrand the 6 PM ET SportsCenter is to just do nothing at all. If ratings are going to stay the same no matter what the format is, maybe it just makes sense to have the most inoffensive, traditional, generic SportsCenter episode that you can imagine. If that’s the case, it’s hard to imagine ESPN going out on any kind of lengthy limb for the new direction of the show. Perhaps they’ll be content with the standard rotation of anchors instead of trying to recreate some kind of dynamic Patrick-Olbermann pairing.

Or if they really are looking to make a bigger splash, maybe the answer is abandoning the 6 PM SportsCenter altogether and going in a completely different direction. If so, it would be one of the boldest and riskiest moves to ESPN’s lineup in quite some time. It’s just one of the many big decisions that faces new ESPN president James Pitaro.