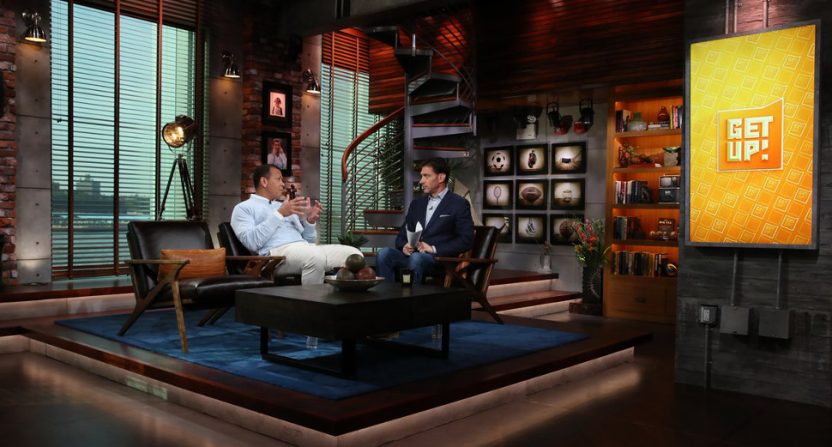 While the initial discussion around new ESPN morning show Get Up (and the surprising controversies it ran into pre-launch) has died down, the show’s ratings have still largely been not great, and there’s been discussion of big potential changes if the numbers don’t improve by the fall. So it’s not surprising that they’re making some moves to try and get viewers’ attention. The latest one is a little surprising, though, as Friday’s show will be guest-hosted (for two of its three hours) by…Alex Rodriguez?

.@AROD will co-host @GetUpESPN this Fri in studio from 8-10 a.m. ET to kick off a big weekend in New York which will culminate with Rodriguez calling his first #Yankees #RedSox Sunday Night Baseball telecast. He's also scheduled to appear on Stephen A Smith's @ESPNRadio show Fri. pic.twitter.com/EB5BfdMXEw

That makes some sense, especially with Rodriguez in New York already for the Sunday Night Baseball assignment. And Get Up has long had a revolving cast of contributors beyond the central hosts of Greenberg, Michelle Beadle and Jalen Rose (Beadle will be on set Friday as well, while Rose will be on remote), so this isn’t something particularly new there; it’s just more notable because Rodriguez is a pretty big name, but one who has mostly just done baseball assignments (with the MLB on Fox postseason show and Sunday Night Baseball) so far. A two-hour stint as a co-host, not just a short one as a guest, is a pretty big step. They’d better not leave any footballs lying around. (If they have a dunk tank, though, that could have potential…)

As for the larger picture of Get Up, a lot depends on who you ask. It didn’t launch well, with 246,000 viewers on average for its much-publicized launch week in April (a 24 percent drop year-over-year from SportsCenter in that slot), and has been regularly been pulling less than 300,000 viewers even into June. (And hey, A-Rod knows something about year-over-year declines.) But ESPN execs like EVP (content) Connor Schell have said that it’s “a work in progress,” and Greenberg repeated that theme in comments at the Hashtag Sports conference Wednesday.

Greenberg mostly talked about the content side rather than the ratings, saying “There isn’t any question what the first step is, and that’s creating a good show. That’s my job first and foremost.” He then covered the difficulties of creating a show “from nothing,” and said “I think it’s terrific. Each week, we’ve gotten a little better, a little more comfortable, figuring it out as we go, and sometimes, there are parts of doing that under a microscope that can be challenging. But overall, I think it’s been terrific so far, and I think it’s ahead of where I had envisioned in my mind as far as the content is concerned.”

Greenberg then went on to talk about relationships with partners as well as viewers. He said “We’ve had some terrific meetings of late, we have a lot of opportunity for that. So I would say ‘So far, so good,’ I think when the football season arrives we’re really going to be primed for that, and I feel really good about how it’s started.”

That’s pretty expected from Greenberg, with maybe only the “I feel really good about how it’s started” standing out, but even there, it’s relatively expected that he’s putting the best possible spin on his show. And maybe from the content side, which he actually has more control of, there are some successes.

At any rate, the ESPN view for the moment seems to be that Get Up‘s lackluster start from the ratings side is more growing pains than long-term problem, and maybe some high-profile moves like A-Rod guest hosting (and maybe this will be followed with other big-name guest hosts) will get more people to tune in. Or maybe the ratings issues will turn out to be part of a more concerning long-term trend. We’ll see. At any rate, it’s certainly interesting to see A-Rod sliding into a general sports show, even if it is only for one day. Better guard those display monitors…