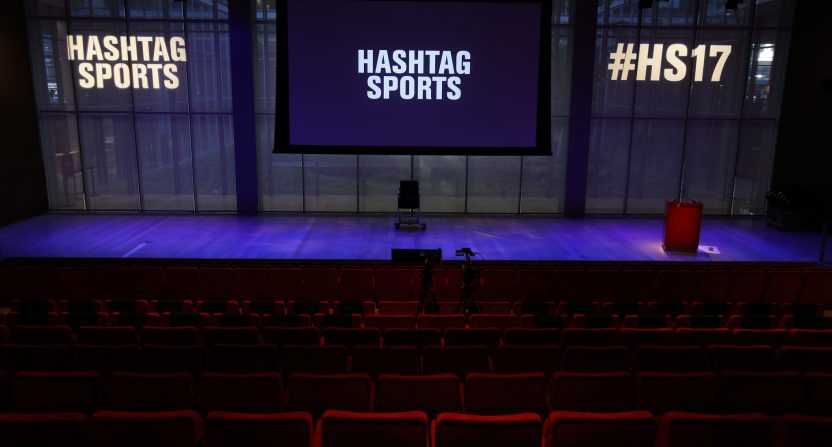 Leading up to the Hashtag Sports conference next week in New York City, focused on “fueling the new sports economy,” Awful Announcing spoke at length with the company’s founder Anthony Caponiti on how the company was founded and evolved from a digital media agency, to a company thriving in the event space. Caponiti discussed how Hashtag’s conference grew since its conception in 2015 as a web forum to a live event where more than 2,000 people are expected to attend over three days next week.

Here are some highlights from AA’s 30-minute interview with Caponiti, with his answers only lightly edited for clarity.

On the need for a live event like Hashtag Sports’ conferences:

From the beginning of launching our newsletter, we had realized that as this feedback was coming back to us, there really was a deeper need in and around the sports industry, and kind of looking forward three to five years of how the industry was already beginning to, and would, evolve across the media landscape— with athlete sponsorships, direct-to-fan, sports innovation in general, venture capital coming into the industry— it was very clear to us that there was a need for more resources, also especially in the event space, in wanting to have the context and the voice and cultural footprint, and experience to go with that event platform.

On being able to maintain and retain its newsletter audience, which goes out to more than 10,000 people per day since first going out in 2012:

We built out and had built out a fiercely loyal audience. Over 55 percent of the readers of our daily newsletter have subscribed for three years or more. So our retention rate is extremely high, especially for a resource that’s in somebody’s inbox on a daily basis. Anybody that publishes a daily newsletter knows how difficult it is to keep readers. And then when you couple that with a B-to-B distribution, it’s even more difficult to keep daily readers, because of job attrition in 2018. So we’ve built extreme loyalty, and from there we’ve now launched other frequencies to our newsletters. But it’s a great community.

How media rights is such a major driver of the new sports economy:

From our perspective, we see the money in the industry as flowing top down from media rights in the context of media. That is the lens into the innovation, right, whether it’s collective bargaining agreements, whether it’s the OTT deals shifting from linear, media rights creates the money that then trickles down that is creating the power shift, the democratization of investing, athletes becoming investors, direct to fan, along obviously with the empowerment of what the social platforms created in terms of these capabilities.

Only until the last 18 months has the money at a macro level in the sports business industry surpassed the 50 percent point of revenue in media versus the gate and merchandising.

How and why more players are coming to the table in the new sports economy:

When you look at the distribution and the rights movement from linear to OTT and the democratization of the stakeholders, the industry has been traditionally extremely isolated in its verticalization. Properties typically only work with sports talent agencies. Very few sports marketing agencies specialized, existed. The power players were very much a small group, and the industry tended to work in an insular manner.

As media has broken it wide open from an advertising and sponsorship perspective, as you hit that inflection point— and digital has been the driver, right— and the changing consumption habits of the connected fan, including millennial and Gen-Z fans and beyond, now all of a sudden the money begins to flow. And as this money flows in a more cyclical, virtuous cycle instead of being insular, more stakeholders have come to the table. Those stakeholders are average Madison Avenue agencies, they’re pure-play digital agencies, they’re specialized sports marketing agencies that are springing up. They are realizing that athletes can make viable revenue streams, whether rookies or beyond, to not only obviously bring in more money but to create careers on and off the field, or pitch, off the ice, whatever it may be.

Last year, Martellus Bennett was on a session speaking about his creative agency along with Nickelodeon and his partnership with Nickelodeon and the NFL. And Martellus is a great storyteller. He really is a pure creative. You could see that from what Imagination Agency creates in their illustrations and the stories that they tell. And if you go back and listen to the transcript, Martellus is speaking about some of his creativity and his process and he starts telling a story of being a gazelle running through a safari. Martellus is definitely a great example of that, just one of those [people] where you never know what you’re going to get. That one stood out. We remember reading that transcript and just kind of looking at people’s reactions.

On who Caponiti would love to have speak at a future Hashtag Conference:

An example I would cite would be Kobe Bryant. It’s not that we’ve tried and can’t get Kobe Bryant, I think there’s only so much programming, but with Kobe for example, he’s somebody who’s not only one of the greatest players to ever touch a basketball in history, he won an Oscar. That’s very much, along with some of the other data points that I’ve cited like the 50 percent revenue mark, that’s an inflection point in this industry. To have somebody like Kobe win an Oscar in that short period of time, concentrating his post-sports career on building out a media and production agency, that signals quite a bit about where everything is headed. So not necessarily somebody we tried to get and couldn’t get, but Kobe would be an example of somebody for example that hasn’t yet taken the stage at Hashtag Sports that I think really encompasses not only where we’re at in 2018, but where we’re headed in the next decade.

On which speakers he’s most excited for at next week’s conference:

We have a loaded program. I think any time you have not only athletes, but elite thought leaders on stage, you’re gonna get a lot of amazing conversations. It’s kind of difficult to pull one out.

Victor Cruz and Ryan Blaney will both be recording their podcasts live. Ryan Blaney’s NASCAR pod is amazing, Glass Case of Emotion, if you’ve ever listened to it. The Victor Cruz show is on Uninterrupted.

On why every sports media fan should want to attend the conference:

But I think what makes Hashtag Sports particularly interesting is the convergence. Because we are focusing on what this new sports economy looks like. What does that new sports economy look like? It looks like a comedy show at Bleacher Report. It looks like a conversation about what a non-endemic brand is doing to come into the sports industry for the first time and activate around eSports, or increase their spend. It looks like live podcasts like Victor Cruz or Ryan Blaney.  It’s the convergence of all these different areas that fans are excited about from a content and culture perspective. We’re just scratching the surface. We’re only three years in. And I think we’re doing a pretty good job of showing the fan and showing the industry professional what that looks like.

Bringing those experiences to life and keying in on bringing the best and brightest and educating them— and it’s not just an executive play— I think one of the missing elements, traditionally in the sports industry is marrying up the opportunity to have accessibility with the foremost thought leaders and executives in the world. Traditionally, the industry really operates on one end of the spectrum or the other. The student-led conference, an executive only conference, backdoor you’re-only-in-the-flow-if-you-know-somebody. But there is an ability to be in between, and I think marrying off what I just spoke about with the accessibility with the type of elite programming and thought leaders that we have, that’s what makes it interesting to the everyday sports media enthusiast.