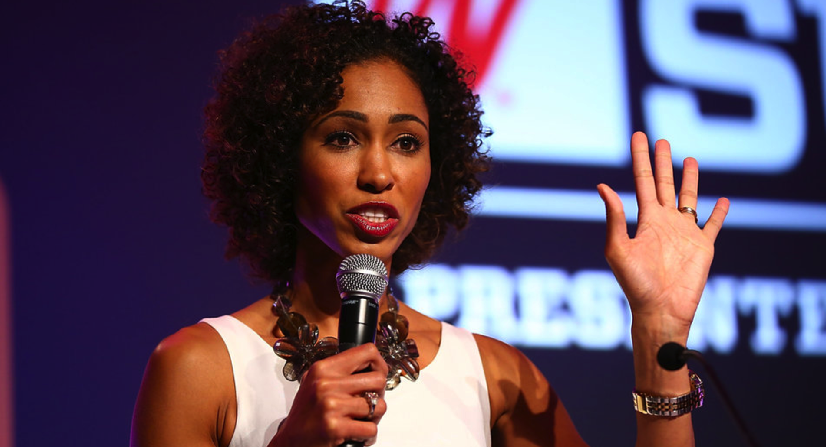 As Sage Steele embarks on the next phase of her career, going back to Bristol to be a host of SportsCenter: AM beginning on Monday (Aug. 28), she’s ending a period of transition in her life while trying to stay out of and above the fray when it comes to discussing politics in an increasingly polarized sports media landscape.

As Steele was being interviewed, her family was still in the process of moving across the country, from the Phoenix area back to Connecticut. After seven years in Bristol working on SportsCenter and fulfilling the dream she had since age 12 and becoming a sportscaster, Steele took over duties on NBA Countdown in 2013, a role she held until April as she spent most of the year with SportsCenter On The Road.

Her first assignment was the NLCS, which she delighted in as a longtime Chicago Cubs fan. Steele proceeded to cover the World Series, Veteran’s Day coverage from Arlington National Cemetery (important for an Army brat like Steele), Monday Night Football in Mexico City between the Raiders and Texans, the College Football Playoff, the NBA on ABC until April, the Super Bowl, the NBA All-Star Game, the Final Four, the Masters, and the NBA Playoffs and Finals.

“SportsCenter On The Road has probably been the best year of my career,” Steele said. “My year has been every single huge sporting event on the planet, pretty much.”

Steele will join friends Jay Harris and Randy Scott on the new morning show from 7-10 a.m. eastern Monday through Thursday, and said that she wouldn’t have agreed to go back to SportsCenter almost a year ago if she didn’t get to work with talent and producers she already felt familiar and comfortable with.

“When people don’t like each other, it comes across on camera.” Steele said. “I don’t care how good of an actor you think you are.”

She’ll have weekends off, which is not only important for a mother of three to be around her kids as they begin 10th, 8th and 6th grade — “crucial ages,” she said — but it also affords her the opportunity to continue to do SC On The Road and other cross-promotional work, including co-hosting the Miss America Pageant with The Bachelor‘s Chris Harrison on Sept. 10. While no longer hosting NBA Countdown, covering many of the league’s biggest events on-site for SportsCenter while having a more consistent schedule at home gives Steele a healthier balance of work and family.

What Steele won’t be doing, as was previously rumored, is joining Mike Greenberg’s NYC-based ESPN morning show, which begins on Jan. 1.

“That was never once brought up to me,” She said. “I saw that, and I’m like ‘Really? News to me.’ And it went away pretty quickly for a reason [laughs].”

Asked if she would join Greenberg if asked, Steele replied that she would never be asked to begin with.

“This role was in play almost this whole year,” she said. “So it’s not even a hypothetical because I know I would never be asked because SportsCenter’s my thang [laughs].”

Going back to January, a day after hosting pregame coverage in Los Angeles on Countdown for a Cleveland-Oklahoma City game, Steele was headed to LAX for a flight to Houston to anchor SportsCenter on site for Super Bowl week. Thousands of people flooded the entrances to the airport’s terminals in protest of President Donald Trump’s immigration ban, and Steele’s Instagram post describing how she missed her flight sparked a nationwide discussion.

So THIS is why thousands of us dragged luggage nearly 2 miles to get to LAX, but still missed our flights. Fortunately, a 7 hour wait for the next flight to Houston won't affect me that much, but my heart sank for the elderly and parents with small children who did their best to walk all that way but had no chance of making their flights. I love witnessing people exercise their right to protest! But it saddened me to see the joy on their faces knowing that they were successful in disrupting so many people's travel plans. Yes, immigrants were affected by this as well. Brilliant. ??

She was even criticized by her own ESPN colleague, Dan LeBatard, who called Steele’s comments “the height of privilege.” Steele remains undeterred.

“It hasn’t changed me at all because I was talking about an experience that I had, and most importantly that I saw others having,” she said. “At the end of the day, I will never, ever be too concerned with what others think, except my family and my bosses and my peers.”

“I got death threats. People said that they wanted to rape my daughters, okay?” she said. “The thousands of things that have come my way from social media posts, it’s intense. It’s been extremely intense. It’s been some great teaching moments with my kids.”

Her eldest daughter, who’s 15, saw these comments and threats, and Steele had what she described as a difficult conversation with her.

“I do want her to see the other side of Mom’s really cool job. And she knows it now,” Steele said. “You can’t protect them from everything. And I actually wouldn’t change a single thing about me, what I said, what I posted.”

Steele tries to stay away from politics on Twitter, and her recent Instagram posts have been about her family’s move.

Good thing we didn't have our mics on today ? Simply put, I CANNOT WAIT wait to work with these guys! #OneMoreWeek #SportsCenterAM @jayharrisespn @randyscotttv

“I pretty much speak about my experiences as a biracial woman,” she said. “Maybe people don’t like what my experience has been, but it happens. And so they can think what they want.”

Steele refuses to let others dictate how she feels about herself based on her social media posts, or in general.

“Overall, the big picture is that if you allow yourself to be affected by others and their opinions, it’s your own fault,” she said. “I’m 44 years old. I’ve dealt with much bigger things. Gotta have perspective. That is not a concern of mine.”

Another thing that doesn’t concern Steele is ESPN’s perceived liberal bias or agenda, something that’s becoming a bigger issue as some of her colleagues speak out on social media. Just this week, numerous members of the Cleveland Browns knelt during the National Anthem of a preseason ESPN Monday Night Football game, and ESPN was criticized for how it handled college football broadcaster Robert Lee, who was scheduled to call a University of Virginia home game.

“It’s so subjective. It all depends on what you want to believe,” Steele said. “Because you can find evidence, probably, to support both sides.”

What Steele has learned from the toxic social media atmosphere is that she can’t control what people think, and people are going to believe whatever they want regardless of what she says or how she acts. Steele would prefer it if society preached more diversity, tolerance and acceptance, regardless of gender or appearance, and that means diversity of thoughts and beliefs as well.

“And that’s where we’re lacking,” she said.

If politics becomes a major news story on SportsCenter: AM, like with Colin Kaepernick, of course Steele is going to have to talk about it, she said. But otherwise, she’s paid to be a sportscaster, not a political pundit.

“I’m pretty sure LeBron doesn’t care about what I think politically, and I don’t care what he thinks either,” Steele said, regarding his tweet following President Trump’s Charlottesville press conference.

It's sad what's going on in Charlottesville. Is this the direction our country is heading? Make America Great Again huh?! He said that??‍♂️

In fact, Steele doesn’t care about what anyone thinks politically. Of course she has her opinions of what’s going on, but she doesn’t feel it’s productive or necessary to publicly state her beliefs, unlike others at the network.

“I disagree with a lot of things that are going on right now. You have no idea,” she said. “And sometimes it’s hard to keep your mouth shut. But I know that’s not my role. Do I talk about it at home with people that I trust and can have a sane conversation with? Yes. But on social media, why?”

Steele vehemently disagrees with others at ESPN who make their political stances public. For her, it’s unquestionably a private matter. For someone who’s watched ESPN for nearly her entire life, she knows that people aren’t tuning in for what she thinks about what happened in Charlottesville, Boston or Phoenix.

“I’m a sportscaster,” she said. “If I were a political analyst, if that were my beat and I had all the facts in front of me— because most of the people at my network and any other network don’t, probably— for me, I don’t have all the facts.”

When Steele begins on Monday, you’ll get highlights, the biggest news of the day and interviews with sports’ newsmakers anchored by a woman firmly in her comfort zone, not conforming to the ever-prevalent trend of mixing sports and politics.

“Maybe I’m in the minority,” Steele said. “Others think differently and that’s fine. To each his own, put it that way.”