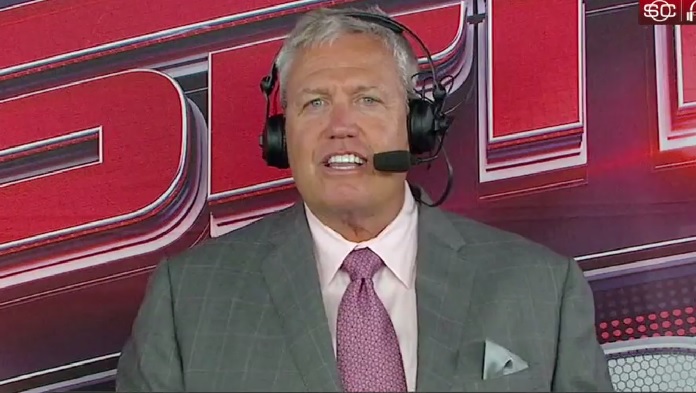 Rex Ryan broadcasting Monday Night Football was bound to be viewed as a breakout success or critical failure. There probably wasn’t going to be any room in-between among viewers. Either the outspoken former NFL coach was going to be a refreshing surprise on TV, sharing some candid opinions and memorable observations, or a disappointment by showing little personality and his inexperience in the broadcast booth.

As you might have guessed, it turned out to be the latter during the second game of ESPN’s MNF doubleheader. The late game has been a punching bag for fans and critics going back several years, with Chris Berman doing play-by-play or experiments such as Mike and Mike calling the game. That scrutiny was sure to continue with Beth Mowins calling play-by-play alongside Ryan as an analyst.

However, Mowins is a proven broadcaster, regularly calling college football for ESPN, so the question mark was going to be Ryan. Offering quick takes and sound bite analysis in the studio is quite a different circumstances than a game broadcast during which a commentator has to talk more often and respond quickly to what’s happening on the field.

Judging by the consensus Monday night, viewers didn’t think so much of Ryan in the booth. He was subdued, occasionally trying to force some bits of levity and personality into his commentary (“the hated New England Patriots–I mean, the New England Patriots”), but often seemed hesitant to say something or a bit behind the action on screen, especially during replays.

Most importantly, Ryan offered little perspective as a coach, failing to explain what the Broncos or Chargers defenses might do in given situations. And considering he worked with new Chargers coach Anthony Lynn for eight years, Ryan provided very little insight as to his former assistant’s approach or philosophy. (Maybe he didn’t want to seem too one-sided in his analysis. Or maybe that was even a direction he was given.)

What did the people have to say about Ryan on Twitter? Here’s a sampling of Monday night’s response:

Really was looking forward to #MondayNightFootball but then Rex Ryan came on espn pic.twitter.com/s6zxiUXkLn

Never, ever in my life have I watched ESPN Deportes. Gracis Rex Ryan for being so unbearable as to make me change the channel. #MNF

I hope some NFL team hires Rex Ryan….so I never have to listen to him on TV again. Now, let's get a goddamned snack.

Rex Ryan lives in a permanent state of Have Had Five Beers. I respect it very much.

Ha. Oh man, I didn’t think it could be worse than Phil Simms, but Rex Ryan is in Tim McCarver territory after just one night.

The New York Post‘s Mark W. Sanchez (not to be confused with Ryan’s former quarterback with the New York Jets):

“Ryan did not seem confident in his speech and looked like the rookie analyst he is: At the start of the broadcast, his partner, Beth Mowins, had to remind him not to interfere with his microphone. Mowins, who became just the second woman to call an NFL game, dragged him through a night that seemed more like a preseason dress rehearsal than a Week 1 showtime (though Dipp helped that feeling). Ryan lacked the energy needed for a Monday night game, coming across more as sleepy than engaged.”

“Rex Ryan, who will be in ESPN’s studio for the rest of the season, was totally out of his league calling a game. He often stuttered, constantly said ‘um,’ and basically told you exactly what just happened on a play and offered no insight or original analysis. He also had no energy and sounded like it was a chore for him to call the game.”

Ryan’s debut was almost certain to be viewed unfavorably, with the audience ready to pounce on any mistake or mishap. But after Tony Romo raised the bar for rookie NFL TV analysts in his first broadcast for CBS, it’s possible that people were even harder on Ryan.

Maybe the former coach is best suited as a floating head above the Sunday NFL Countdown crew during ESPN’s pregame show.

Rex Ryan looks like he's about to tell Nick Fury why the Avengers Initiative isn't going to work pic.twitter.com/uBJGD1mlSI

Make your jokes about getting a snack and let’s move on. Hopefully, Ryan gets better at this each week, though we won’t be seeing him in the booth again for quite a while, if ever. And how about giving Mowins a better analyst partner for her next NFL broadcast? Things can only go up for Jay Feely.