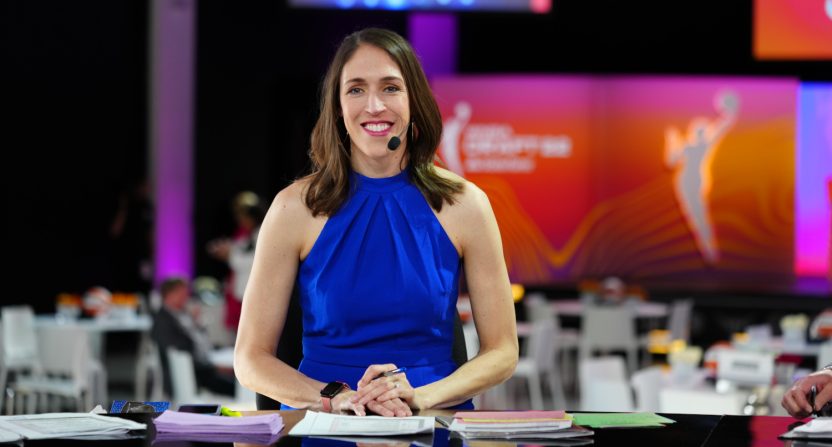 One of the longest-tenured analysts on ESPN women’s basketball coverage will continue in that role. Way back in 2004, the first year after her retirement following a prominent career in the WNBA and NWBL, with the U.S. national team, and with the NCAA’s Connecticut Huskies, Rebecca Lobo (seen above on ESPN’s 2022 WNBA Draft coverage this April)  joined the network as an analyst and reporter for college and women’s basketball. Lobo has been a prominent presence at ESPN since, including calling the Women’s Final Four with Ryan Ruocco and Holly Rowe, and that’s now going to continue for some time to come:

ESPN has signed @RebeccaLobo to a new multi-year contract extension

Here are some quotes from that release, which has Lobo set to continue as “the lead game and studio analyst for ESPN’s women’s college basketball and WNBA coverage”:

“I am thrilled to continue doing what I love, calling women’s basketball games,” said Lobo. “It is an honor to be a part of the soundtrack for the games played by these incredible female athletes.”

…“Rebecca is one of the best in the business. She excels on both game coverage and studio coverage,” said Patricia Lowry, ESPN Vice President, Production. “Her knowledge, history, and passion for the game and its growth continue to make us better. She is a true asset and a highly valued member of our team.”

“Rebecca has played a significant role in the growth of women’s basketball throughout both her playing and broadcasting careers, and we’re thrilled she will continue to elevate ESPN’s coverage of both the WNBA and the college game,” said coordinating producer Sara Gaiero. “Rebecca is one of the sport’s most credible voices, consistently educating our fans with sharp, insightful analysis while entertaining with her humor and wit.”

In 2018, Lobo spoke to Alex Putterman for an AA piece, and talked about her desire to keep growing women’s basketball:

Do you now ever look around at the attention that ESPN or the media in general gives to the men and wonder, why isn’t there a 24-hour women’s bracket marathon?

No, because I understand the reality of the sports-viewer landscape. I know how many people are watching men’s college basketball and how many people are watching women’s. Instead of getting frustrated or annoyed, you say OK, let’s continue to grow our side. And it’s kind of the same thing with the WNBA. The NBA had a 50-year head-start on the WNBA, so that league is still, in a lot of ways, in its infancy as it’s trying to get to where it wants to be.

Women’s basketball has continued to grow significantly since that interview, both in the professional ranks and the college ones. And Lobo will now continue to be a part of its growth at ESPN.