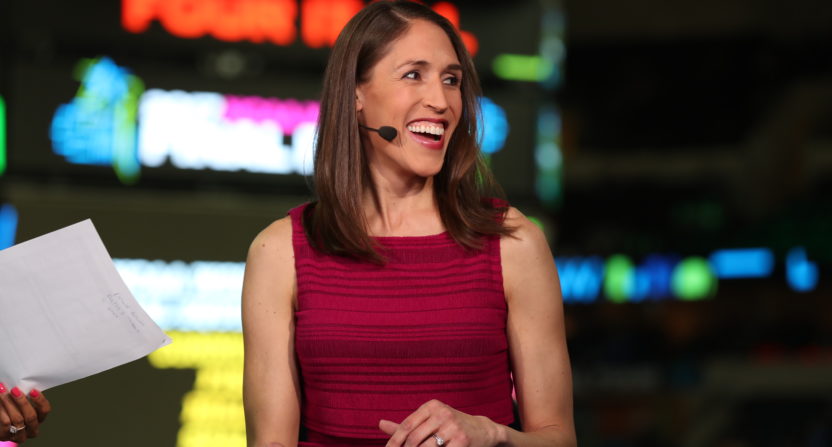 Lobo has watched the last decade and a half of UConn dominance from ESPN, where she has worked as an analyst and reporter since 2004. During this year’s women’s NCAA Tournament, which begins Friday and will air exclusively on ESPN, Lobo will serve as a studio analyst for the early rounds, before calling the Albany Regional and the Final Four alongside Adam Amin and Kara Lawson.

We caught up with Lobo this week at ESPN studios in Bristol, where she had just come off a live segment on the network’s Tournament Challenge marathon. She shared her thoughts on media coverage of women’s college basketball, the way her alma mater dominates conversation around the sport and which team you should keep an eye out for in the coming weeks.

For most of the year on ESPN, women’s basketball takes a backseat behind the men’s game. What’s it like for you this time of year with women’s games all over the airwaves?

It’s nice. It’s nice that because ESPN owns [rights to] the tournament, we get to show all the games, we get to talk about all the games and really bring all the stories to the forefront. The casual fan, of course, knows UConn and their dominance and Coach Auriemma and some of their top players, but there’s a lot of good teams, there’s a lot of really good stories, and it’s nice for us to get a chance to tell them.

How has media coverage of women’s college basketball changed since you were in college?

Well, there’s a lot more of it. My senior year, when we won our first national championship, the tournament was on CBS. They didn’t cover every game. The semifinals were Saturday and the finals were Sunday. We had to play back-to-back because those were the windows that CBS would give us.

There wasn’t the national following like there is now in terms of USA Today and the New York Times and all that. But even bigger, just because there wasn’t social media and there weren’t blogs. [Now] if you want women’s basketball, if you want that content, you can find it now. You can find blogs, you can find information. For us, it was, am I in the local paper? Am I on SportsCenter? Those were the only places you could find information if you were thirsty for it, and now if you are you can find it in a lot of places.

As a player, did you ever resent that men’s basketball got vastly more media coverage?

No, because I was at a place where the gap between what the men were getting and what the women were getting was closing quickly. The athletic department, the administration at UConn did a great job of making us feel like we were equal to the guys, in terms of how we traveled, the amount of per diem we got. I remember my senior year that was a big deal for us. Like, we get the same amount of per diem as the men during the tournament. I think we all, too, understood that what we were getting was better than what had happened to any generation before us, so I think we were thankful more than anything.

So do you now ever look around at the attention that ESPN or the media in general gives to the men and wonder, why isn’t there a 24-hour women’s bracket marathon?

No, because I understand the reality of the sports-viewer landscape. I know how many people are watching men’s college basketball and how many people are watching women’s. Instead of getting frustrated or annoyed, you say OK, let’s continue to grow our side. And it’s kind of the same thing with the WNBA. The NBA had a 50-year head-start on the WNBA, so that league is still, in a lot of ways, in its infancy as it’s trying to get to where it wants to be.

Could you imagine something like ESPN’s 25-hour marathon for women’s basketball one day?

You know, why not? Hopefully we’ll get to the place where the fans are clamoring for it, want it and support it. But it’ll take a lot of time because the guy’s game has such a head-start on us.

Everyone always wants to discuss UConn and whether they’re good or bad for the game and all of that. Does it ever bother you that they’re the only team anyone ever cares to talk about?

No, because I think unfortunately, in the landscape of women’s college basketball, if there wasn’t a dominant team for people to talk about, they might not be talking about any of it. When UConn lost last year, that was a huge story, and people across all sports were talking about that because [the Huskies] were involved. So it’s better to have somebody that everybody’s talking about than to not have the discussion happening at all.

When you were at UConn, could you have imagined this? Did you see the beginning of it?

No. When we were there, they had gone to a Final Four three or four years before [in 1991]. We had never won a national championship. It was my senior year that we got our first one, and we were so wrapped up in how great that was, we never—no one could have ever thought that there would be multiple ones to follow, especially this many.

We all thought Coach Auriemma was a great coach, but none of us ever thought he would become the most dominant coach in the history of women’s college basketball. So, no. And if anyone said that they saw it, there’s no way that’s the truth.

With all the focus UConn gets, do you think the other top teams get an appropriate amount of attention? Do you think people know about, say, South Carolina?

Well, South Carolina fans do. They led the nation in attendance this year. I think there’s pockets of the country that are big supporters of their teams. Mississippi State has grown their fan base exponentially since Vic Schaefer got there. And so there are places that love women’s basketball and love their team. And the gap is kind of closing. A few years ago, when UConn had Breanna Stewart and Morgan Tuck and they’d won four championships in a row, it was UConn and everybody else, and that’s not really the case anymore. There’s a lot more elite-level teams.

Who is a team that the casual fan doesn’t know a lot about but that we should be watching during the tournament?

Oregon. Oregon’s really, really good. They’ve got a group of terrific sophomores. Sabrina Ionescu was the Pac-12 Player of the Year, lead the conference in points and assists. They made an Elite Eight run last year with that group as freshmen, completely unexpected.

And they’re exciting. If someone turns one of their games on, they really can score, they can shoot. Ionescu has got nine career triple-doubles. She’s exciting. So people should pay attention to them and try to seek them out because if you’re looking to watch exciting basketball, they play that kind of game.