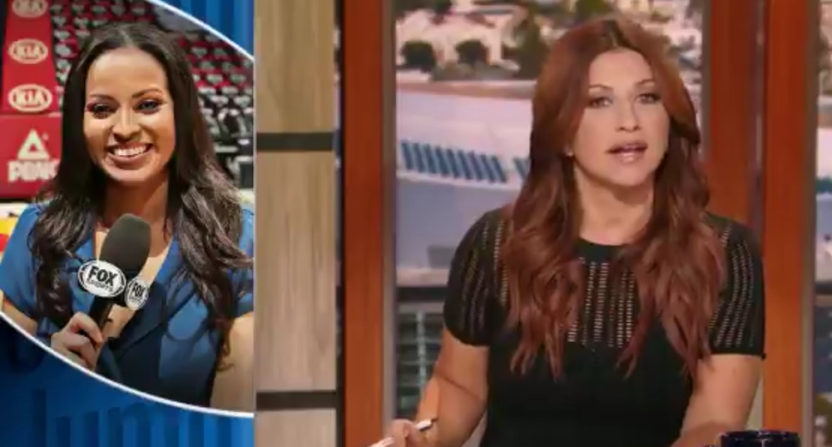 Fox Sports Southeast’s decision to return Stephanie Ready (the first woman to serve as a full-time game analyst for a NBA team) to a sideline role on Charlotte Hornets broadcasts has taken a lot of criticism and spawned a Twitter protest.

The latest to weigh in on the move is ESPN’s Rachel Nichols. Here’s what she had to say about Ready on her The Jump show Wednesday:

Some thoughts on Hornets broadcaster @StephanieReady, and the quieting of one of the NBA's really smart and interesting voices. pic.twitter.com/dwsRp7IFTh

“I subscribe to NBA League Pass, which means I’ve gotten very used to hearing Stephanie Ready on Charlotte Hornets broadcasts. Ready’s extremely sharp. She’s a former player and also a former coach who has coached both men’s and women’s teams, including in the NBA’s G-League, or the D-League when she coached there. And she’s extremely well-liked by Hornets fans, who have seen her work for the past 13 years as a host, as a sideline reporter, and then, starting two seasons ago, as a full-time analyst up in the booth. It was cool to see a woman take on that role, and Stephanie paid the opportunity off big-time with great commentary.”

“Which is why it was confusing when Fox Sports South decided to move her back to the sideline this season. The network told me in a statement that the demotion was because they wanted to go back to a two-person booth, and they consider Ready to still be in a ‘hybrid’ role as a courtside analyst. But here’s the key thing to understand about game broadcasts. When you’re in the booth, and the booth is kind of metaphorical here because of where they sit in the arena, you’re up there, your microphone is open for the whole game, so when you have something smart to say, you say it.”

“When you’re on the sideline, your microphone is closed. You literally have to ask for permission to speak. The producer decides whether he or she wants to add you in, then has to tell the play-by-play person, who then has to decide when and if to go to you. Often by the time all that happens, the moment has moved on and they skip the whole hit altogether. And in this case, that means we get a whole lot less of Stephanie Ready.”

“And look, I’m not here to tell Fox Sports South how to run their broadcasts. We have plenty of stuff going on here at ESPN to worry about. I can only tell you that as a viewer, this change has made Hornets’ games less informative and less enjoyable to me. And I’m not the only one. There has been a whole grassroots movement in Charlotte about Ready, petitions, a Twitter campaign, all in the hope that the network will reconsider. I certainly hope they do. These are the same people who were smart enough and open-minded enough to bring more of Ready’s voice to their broadcasts in the first place. There’s got to be a way to do that again.”

Nichols makes some good points there, especially about the difference between a booth analyst and someone on the sideline, regardless of if their title is “reporter,” “field analyst,” “courtside analyst” or anything else. Being outside the main booth does mean the person in question gets less opportunities to talk and has to clear them more carefully, and that does make this a demotion.

It’s interesting to have a national host weigh in on a regional network’s move, but Nichols does so in a smart way here, talking about how it’s affected her as a viewer of Hornets’ games. She’s far from the only viewer to complain about Ready’s demotion, but she’s one with a big platform. We’ll see if her comments produce any change.