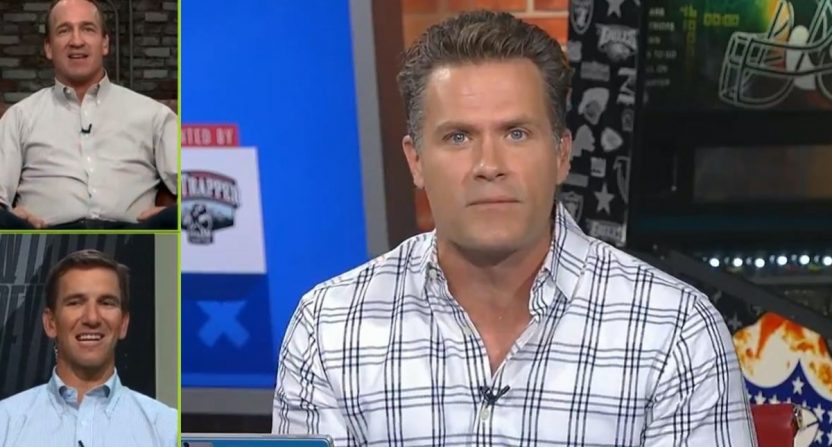 Football fans and sports media observers are currently amid a month-long stretch without the “ManningCast,” ESPN2 and ESPN+’s alternate telecast for Monday Night Football. With the amount of buzz that the Peyton and Eli Manning show has drawn, taking four weeks off seems like a mistake. But the plan all along was for the Manning brothers to call 10 games.

Though the popularity of the ManningCast was likely underestimated, Peyton and Eli didn’t want to work 17 games. And ESPN probably figured 10 games was better than none. Whether or not the break builds anticipation for the next ManningCast during Week 7’s Seahawks-Saints match-up (Oct. 25) or risks the telecast being forgotten remains to be seen.

However, the four-week hiatus (one down, three to go) does provide the opportunity to look at what has or hasn’t worked. Does ManningCast need fewer guests, for instance? They distract Peyton and Eli from watching and discussing the game, and often lead to abrupt breaks to commercials.

Would ManningCast benefit from a host, a third person who could set Peyton and Eli up, moderate conversation, and perhaps ease that transition to commercials? Those following along since the alternate telecast was announced might recall that was ESPN’s original plan with talent such as NFL insider Adam Schefter being up for the job. Ultimately, ESPN decided not to include a host with the Mannings, which appears to be the right decision. But it’s still intriguing to hear about what could’ve been.

Someone else who was a candidate for the third wheel on ManningCast was Good Morning Football‘s Kyle Brandt. Brandt appeared on the SI Media Podcast with Jimmy Traina and explained that he knew a host wouldn’t be necessary after auditioning with the Manning brothers.

Kyle Brandt was a candidate to host ESPN’s “ManningCast,” but after auditioning with Peyton and Eli, he knew the role wasn’t necessary: pic.twitter.com/0cdzTev1Ss

“There were some feeling-out meetings, a couple phone calls, and then we just did a straight-up audition, myself with Peyton and Eli,” Brandt told Traina.

“We did a game. And when it ended, one of the executives who was running the thing called me right afterward and said to me, ‘What do you think?’ And I said, the hype is real, they don’t need a host. They don’t need a third person. I think you should just do it with the two of them.”

Brandt has an idea of when TV chemistry is happening, having been a part of the fantastic foursome on Good Morning Football for the past five years. And that show is working through its own process of finding a new co-host after Nate Burleson left for the revamped CBS Mornings.

But filling that seat isn’t as easy as finding an ex-player who’s good on TV and meshes well with Brandt, Peter Schrager, and Kay Adams.

“It’s a very difficult spot to fill, not only because of the obvious chemistry deal and the obvious work we’ve had behind us with Nate,” said Brandt.

“It’s just like, we’re looking for an ex-player — he’s gotta be an ex-player, this is the NFL Network — and he has to be an ex-player who not only wants to get up at 4:30 in the morning every single day to go to a table to talk to three people who did not play in the NFL and are going to tell him his opinion is wrong. You also have to have that ex-player live in the New York-New Jersey area.”

Brandt also revealed that he’ll be appearing on this Sunday’s The NFL Today (Oct. 10) on CBS for a segment that may or may not be recurring, which means sort of an on-air reunion with Burleson.

The entire conversation is worth listening to, including Brandt wondering if he’s always Traina’s fallback guest, why Good Morning Football hasn’t taken on the Urban Meyer story, and the return of the “Wall Streeters” sketch with Schrager.