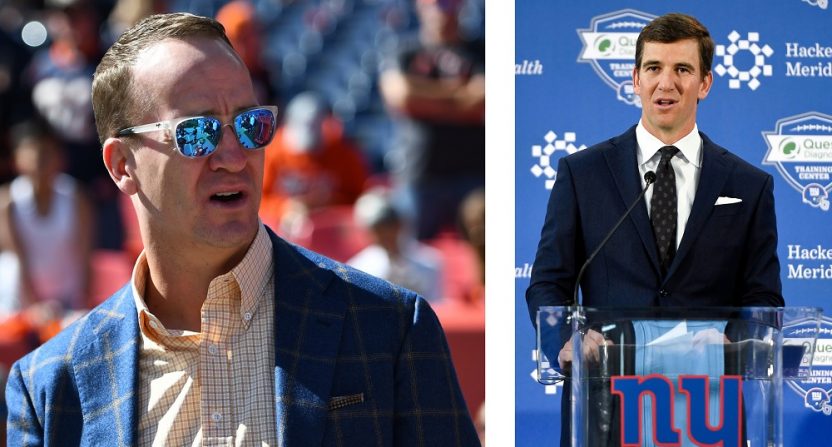 Today, I’m writing the article I never thought I would write: Peyton Manning will call Monday Night Football for ESPN. Well, sort of. Allow me to explain.

On Monday, ESPN announced that Peyton and Eli Manning will be calling Monday Night Football via a series of MegaCasts over the next three seasons. The brothers will MegaCast ten games each year, with those games airing on ESPN2 (and possibly on ESPN+ as well).

Here’s a brief description of what the MegaCasts will look like.

Produced by ESPN, in conjunction with Omaha Productions, the unique MegaCast option will originate from a remote location. Fans will be treated to a mix of in-the-moment analysis, big picture NFL dialogue, knee-jerk reaction, historical perspective, and more. Peyton and Eli will be joined each week by a to-be-determined host. Iconic and current athletes, as well as celebrities, are expected to appear throughout the season. Fans will never miss any of the action, as a multi-box viewing experience will ensure the game is always visible.

There will be MegaCasts in the first three weeks of the 2021 season (Ravens-Raiders, Lions-Packers, Eagles-Cowboys), and the remaining seven will be announced in time. Glancing over the MNF schedule, I assume Colts-Ravens, Giants-Chiefs, and Giants-Bucs will all be featured, if only because of the involvement of the Colts and Giants.

But all in all, the news is that ESPN has landed their broadcasting white whale in Manning after years of trying. Manning’s been loosely linked to various networks, broadcasting gigs, and NFL package for years, and he’s finally committed to doing something in the space. If nothing else, I’m glad that he’s made a concrete decision, and we won’t have to deal with the speculation every spring anymore.