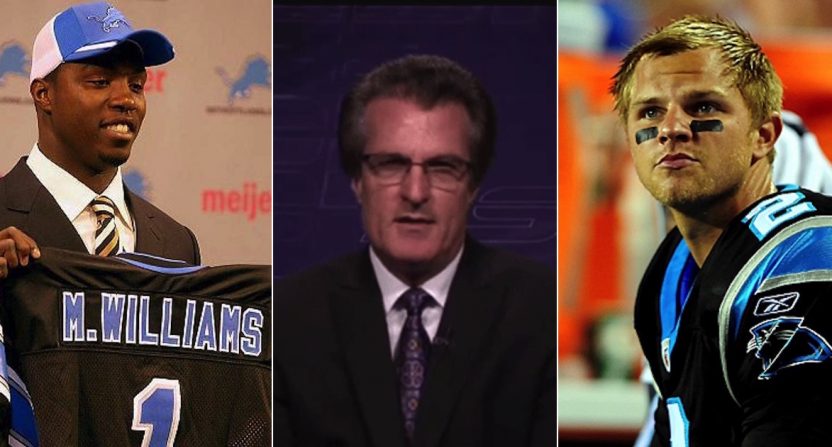 It’s April, meaning it’s time for Mel Kiper to be being cryogenically unfrozen to call the NFL Draft for ESPN for the 33rd year in a row.

When you’ve been on a job that long, it’s only natural to make your share of mistakes along the way.

But something makes Kiper’s gaffes innately more funny because of his cocksure analysis to go along with that ever-present Dracula haircut.

This is the point where we throw our heads back and laugh.

It was fair to wonder before the 2001 draft if LaDainian Tomlinson’s college dominance was more a result of playing in the inferior Western Athletic Conference than his greatness.

But when it’s your job to scout the next great NFL players, people are going to call you out when you rate a future Hall of Famer tied for the 25th best prospect in the draft and the third best running back in the class behind Ole Miss’ Deuce McAllister and Wisconsin’s Michael Bennett.

San Diego did well to ignore Kiper and make Tomlinson the sixth overall pick of the draft. LT only went on to become the fifth leading rusher in NFL history with 13,684 yards on the ground.

As you’re about to see, most of Kiper’s biggest whiffs have come from incorrectly predicting big things from signal callers.

The Detroit Lions drafting the 1989 Heisman Trophy winner was definitely a gamble after Ware spent college playing in the Run & Shoot system against weak competition. But Kiper was sold on the Houston product, proclaiming, “He will be an excellent NFL quarterback.”

Of all the Heisman Trophy-winning QBs who have failed in the NFL, Ware might be the worst. He started just six NFL games and went 3-3 in his brief NFL career. After four seasons in Detroit, Ware was out of the league for good and bounced around the CFL and NFL Europe.

In fairness to Kiper, he wasn’t alone in his praise of Curry before the ‘09 draft. A lot of people couldn’t stop gushing about the Wake Forest LB who seemed like a can’t-miss prospect.

Kiper upped the ante by naming Curry the best player in the entire 2009 draft ahead of players like Matthew Stafford, Brian Cushing, Jeremy Maclin, Clay Matthews and LeSean McCoy.

That proclamation backfired in a big way when Curry was drafted 4th overall, only to finish his five-year pro career with a total of 5.5 sacks.

Akili Smith’s draft stock was sky high in 1999 after one phenomenal year at Oregon and jaw-dropping pre-draft workouts. Kiper was supremely confident in the former junior college player that when Smith was drafted third overall ahead of the likes of Edgerrin James, Ricky Williams, Tory Holt and Champ Bailey. He proclaimed: “Akili Smith will be a great NFL player” and would be “the passer they’d lacked since Boomer Esiason.”

Unfortunately for Kiper, Smith spent about as much time in Cincinnati partying as he did passing a football. As a result, Smith went an abysmal 3-14 as an NFL starter and was out of the league after four seasons.

There’s nothing “great” about that.

Johnny Football was an extremely polarizing pro prospect. On the one hand, he was an undersized QB who hadn’t played in a pro system and had “character issues.” On the other, he was the most exciting player in college football who made magic happen on the college gridiron.

Kiper acknowledged the former but emphasized the latter in January of 2014 when he projected the Houston Texans would take JFF with the first overall pick — even when people with a peanut for a brain could surmise they would draft super freak Jadeveon Clowney.

Kiper also compared Manziel to Fran Tarkenton for the way he played the game.

As we all know, Manziel slid to 22nd in that year’s draft and only lasted two seasons in Cleveland before personal problems resulted in him spending last fall completely out of the league.

A lot of people liked former Iowa quarterback Ricky Stanzi before the 2011 draft, going so far as to compare him to Tom Brady coming out of college.
When asked in a draft recap show who would have the best career of the QB Class of 2011, Kiper said it would be Stanzi — over fellow QBs like Cam Newton and Andy Dalton. Kiper’s reasoning? Stanzi would be able to spend 2-3 years as a backup for the Kansas City Chiefs, much the same way Aaron Rodgers did for the Packers, and then thrive.

While Cam Newton and Andy Dalton have combined for six Pro Bowls and an NFL MVP award, Stanzi has been out of the league since 2015. While being one hell of a model American, Stanzi never stopped riding the pine and never threw a single pass in the NFL.

1998 led to the debate of the century about whether the Indianapolis Colts should draft Tennessee’s Peyton Manning or Washington State’s Ryan Leaf with the No. 1 overall pick.

In fairness to Kiper, he said the Colts should draft Manning. But where Kiper infamously blundered was when he said this about Leaf’s personal character:

“His attitude will be an asset in the NFL and give him a mental advantage over other players in his draft class.”
Kiper added: “I think Ryan Leaf is more mature than Drew Bledsoe [when he was drafted], he’s very much a grown-up, 21-year old.

Leaf’s attitude and lack of maturity led to him embarrassingly screaming at a reporter in the locker room after a game. It also played a large role in the biggest bust in NFL draft history compiling a 4-17 starting record and being out of the league completely after four dreadful seasons.

Like most draft pundits, Kiper fell in love with Russell’s rocket arm that could throw a football a country mile.

And when the former LSU QB was picked No. 1 overall by the Oakland Raiders, Kiper couldn’t stop gushing over the new franchise quarterback.

“Three years from now you could be looking at a guy that’s certainly one of the elite top five quarterbacks in this league… [the] skill set he has is certainly John Elway-like.”

Three years later, Russell had accumulated a 7-18 starting record and was eating his way out of the league with his ballooning weight — not exactly a career that mirrors one of the greatest QBs in NFL history.

Despite sitting out a year while attempting to enter the NFL draft after his sophomore year, ex-USC wide receiver Mike Williams had Mel Kiper drinking the Kool-Aid.

How high? Kiper had Williams rated as the best player in the entire draft ahead of players like Alex Smith, DeMarcus Ware and Aaron Rodgers — among others.

When the Lions and Matt Millen selected Williams, Kiper went all-in on his praise for the pick: “Give the Lions credit for going away from their biggest needs to take receiver Mike Williams.”

When fellow ESPN analyst Merril Hoge questioned the pick, Kiper retorted: “I’ll see you at his Hall of Fame induction.”

Williams ended up catching a total of 37 balls and two touchdowns in Motown. Williams did have one good season with the Seattle Seahawks but his 127 career receptions and five touchdowns are hardly Canton-worthy.

While most people viewed Clausen as a second round pick, Kiper had him as the fourth best player in the entire draft.

People were quick to point out that Kiper’s rankings might be biased because of his friendship with Clausen’s agent, Gary Wichard — something Kiper scoffed at.

Kiper was so confident in his analysis of Clausen that he had this infamous exchange with ESPN foil Todd McShay:

Kiper: “If Jimmy Clausen is not a successful quarterback in the NFL, I’m done. That’s it. I’m out.”

McShay: “What is your time frame, Mel? When do we make that assessment?”

Kiper ended up with egg on his face when Clausen was drafted 48th overall by the Carolina Panthers. The bold prediction has looked even worse over the years as Clausen has been out of the league since 2015 after compiling a starting record of 1-13.

If Kiper is true to his word, enjoy his last year calling the draft for ESPN at the end of this month.