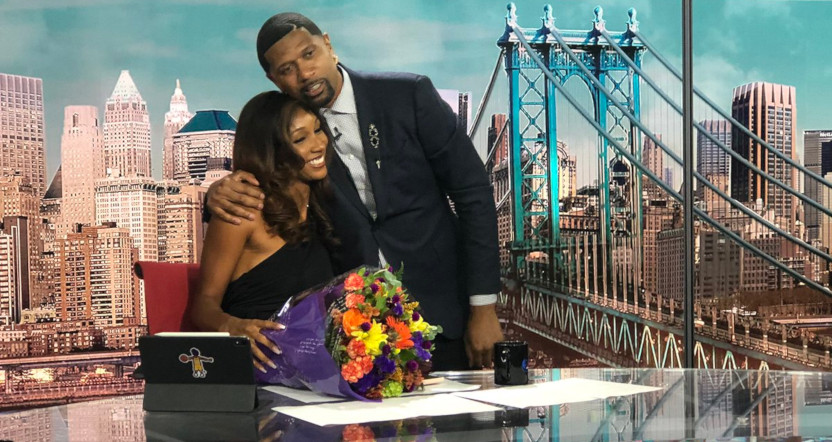 After Chicago radio host Dan McNeil asked on Twitter Monday if Maria Taylor’s Monday Night Football sideline reporting outfit was for a “NFL sideline reporter or a host for the AVN annual awards presentation?”, Taylor received a massive outpouring of support from colleagues, other members of the media, and more, and McNeil lost his job. On Tuesday’s NBA Countdown, Jalen Rose, Jay Williams and the rest of the Countdown team made it clear how much they support Taylor (Countdown’s primary host since 2019), with Rose presenting her with flowers on behalf of the Countdown team and speaking about how much she means to the show.

"From Team Countdown, congratulations, Maria Taylor. Thank you for your intellect, your beauty, and your class in all situations." (Clip from AA colleague @Matt2Clapp: https://t.co/FmY1w2FKvY.) pic.twitter.com/IEwPJR2bN5

Rose says “I would like to exert some influence. From Team Countdown, congratulations, Maria Taylor. Thank you for your intellect, your beauty, and your class in all situations, and in covering your first Monday Night Football game and your first NBA Finals game this year.” Williams then says “I love the way you clap back at people who come to you with ignorance,” and Taylor certainly did that Monday night, even suggesting that McNeil and other critics should check out her work on Countdown Tuesday.

Well Danny Dearest if you would like to continue making sexist comments about me…please bring your misogyny with you to the NBA Countdown double header I’ll be hosting tomorrow night. Hey ladies remember you can wear whatever you feel confident in! @670TheScore @DannyMac670 https://t.co/bN0H582isU

Here’s the second part of the Countdown discussion Tuesday:

“Thank you for continuing to be that example that we need.” pic.twitter.com/BSJca4HOAH

Williams says “Thank you for continuing to be that example that we need.” Taylor says “Thank you all, I appreciate it. Don’t make me cry on the set.” Rose says “Some people turn the other cheek, we eye for an eye.” Taylor says “We’re eye for an eye. Don’t come for the queen.” Williams says “You heard that. You know who we’re talking about.” And after a bit, Rose says, “Congratulations, well deserved, and thank you for being a terrific role model. In this industry, it’s really tough to do what you do on a daily basis, juggle the attitudes and the egos in a male-dominated industry. But you’ll still be a shining star.”

That’s strong support for Taylor, and it says something that ESPN put this on air. ESPN’s defenses to external criticisms of their talent have often come behind the scenes or through PR representatives, so it was even somewhat beyond the norm to see how many ESPN personalities actively chimed in in defense of Taylor on social media Monday. (There’s regularly some defense of colleagues, but Monday’s was on a more widespread level than what we’ve often seen.) And seeing the network put support for Taylor on their airwaves is a further step still. And that further emphasizes just how far over the line McNeil’s comments were.

Update: After the show, Taylor tweeted this:

The people who fuel me. Are the people who support me. The only people who can affect me are the people who love me. Im SO thankful for my NBA Countdown family. Once again you’ve lifted me up over a hurdle. And made me feel like a Queen despite the noise. Lets crush the Finals ? pic.twitter.com/BOJRuFEQMF