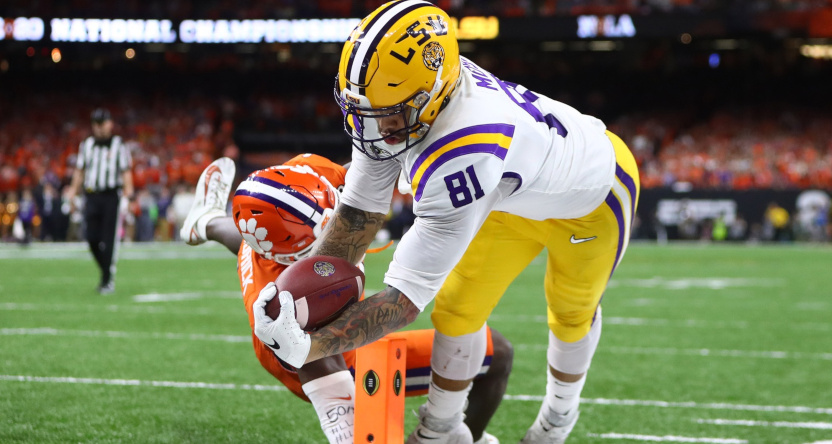 The LSU Tigers’ 42-25 win over the Clemson Tigers in the College Football Playoff national championship game Monday night posted slightly better numbers than what ESPN achieved last year for Clemson’s 44-16 win over Alabama, and it served as the highest broadcast of any kind on cable since the 2018 title game (where Alabama beat Georgia 26-23 in overtime). With that said, however, the numbers (which don’t yet fully account for streaming) still weren’t all that great relative to some of what we’ve seen in the past decade of BCS title games and then CFP title games (since 2014-15). Before we get there, though, here’s more from ESPN on how their cross-network MegaCast presentation of the game performed:

The LSU vs Clemson audience also resulted in cable’s best viewership – across all programming, sports and otherwise – since the Alabama-Georgia College Football Playoff National Championship (Jan. 8, 2018).

ESPN’s MegaCast audience peaked at 29,200,000 viewers, after LSU took the lead for the first time late in the second quarter (9:45-10 p.m.). The LSU Tigers would never trail again in the game.

Solely on ESPN, the primary telecast of LSU-Clemson delivered an audience of 25,004,000 viewers, up 3% from the same presentation of the CFP National Championship last season (24,322,000 viewers).

As mentioned, those numbers don’t have the full streaming totals, so the viewership total could still rise. However, as of this moment, this would clock in at seventh in terms of total viewers amongst the last 10 BCS national championship (from 2010-11 through 2013-14) and CFP national title (since 2014-15) games. Here’s how that list looks, using numbers from Paulsen’s historical title game ratings page at Sports Media Watch (and using the pre-streaming numbers, as they’re a better comparison for this year’s figure; the numbers with streaming included can be seen on that page). 2010-11 is also a good starting point, as it was the first year the BCS title game aired on cable ESPN rather than broadcast ABC (1998-99 through 2005-06, also 2009-10) or Fox (2006-07 through 2008-09): 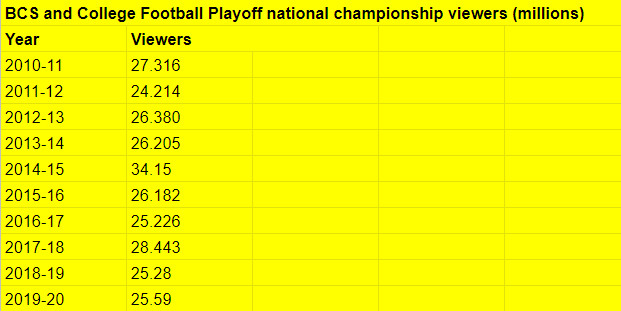 So this is the fourth-lowest title game in that span, ahead of only 2011-12 (Alabama 21, LSU 0), 2016-17 (Clemson 35, Alabama 31) and last year (Clemson 44, Alabama 16). And while the 25.59 million number here certainly isn’t bad for ESPN (it’s nice for them to see some year-over-year improvement) and isn’t far off the numbers for the majority of the title games (BCS or CFP) over the past decade, it’s not an outstanding result either.

We again remind readers that Clemson was 12th in total viewership this year amongst the top 15 teams in the Week 15 CFP rankings, making the Ohio State message board suggestion that ESPN rigged the semifinals to get them into this game absolutely hilarious. So this is probably about as expected for this matchup, and it fits in with most of the games over the past decade. The only really wild deviation there was in 2014-15, which A. was the first playoff final and B. featured a very strong draw with Ohio State (and a decent one with Oregon, coming off their fourth-straight division title).  So this is about par for the course. It’s also notable that while the playoff format doesn’t necessarily beat the BCS format in terms of title game viewers, it’s well ahead overall thanks to the semifinal games’ audiences, which is a big part of the discussion about playoff expansion (which would add quarterfinal games and a lot more viewers).

Of course, ESPN will be happy with some year-over-year improvement, even if it’s slight. And it’s notable that the CFP games as a whole, so this game plus the two semifinals, were up a more significant four percent this year, thanks to those semifinals being up six percent. But these numbers are more holding serve than domination.