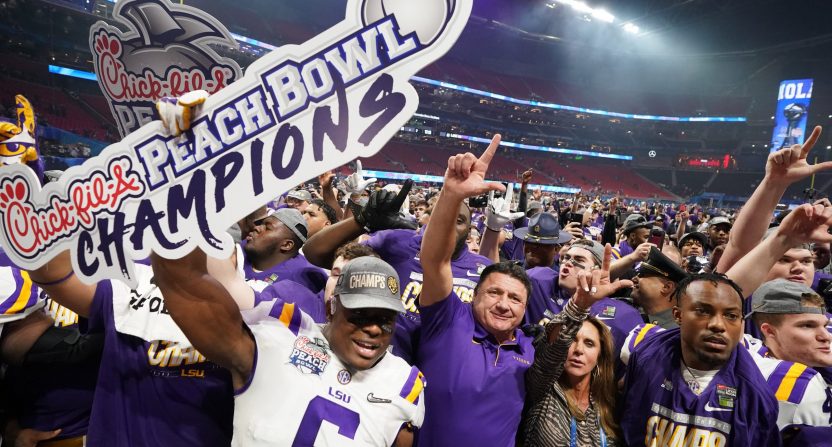 Much of the talk surrounding the College Football Playoff this season circled around the fact that the semifinals would be played on December 28 and not New Year’s Day or New Year’s Eve. It’s an argument that has been brewing for a few years now as ratings have fluctuated depending on the matchups and days the games have been played.

Traditionally, CFP semifinal games played on New Year’s Day (2014-15 and 2017-18) pulled in way more viewers than the New Year’s Eve games (2015-16 and 2016-17). Last season, the semis were played on Saturday, Dec. 29 and the ratings were down a combined 25 percent from the previous season. This year, the games were played a day earlier, Saturday, Dec. 28, and all eyes were on how well the games would perform for ESPN and just how much the teams involved and the matchups made a difference.

By comparison to last year, the numbers look pretty good. Last year’s daytime semifinal game, which was also a blowout, pulled in 16,809,000 viewers, while the primetime semi, which was a closer contest, recorded 19,069,000 viewers. So by all measures, this year’s viewership was up. In fact, the Clemson- Ohio State game drew nine percent more than last year’s game in a similar timeslot and was, per ESPN, the most-watched CFP semifinal game not played on New Year’s Day.

Combined, the College Football Playoff semifinal games averaged 19.3 million viewers, which is six percent higher from the previous year and makes this the most-watched pair of CFP semifinal games not played on New Year’s Day.

That’s good news on one front as it means good matchups and interesting teams can keep the rating momentum going for ESPN. But it’s also a stark reminder that as good as things can get on a non-New Year’s Day semifinal lineup, it still pales in comparison to the numbers they could draw by having the games back on New Year’s Day.

There are, of course, many factors involved beyond the specific date the games are played (teams involved, the competitiveness of games, etc.), not to mention the requirements and whims of the bowl games involved. But there’s also a clear delineation between that date and the others that the CFP has tried so far. So as good as this year’s numbers are, they can’t match the potential audience available on January 1. ESPN is surely eager to get back to that date (as well as the Rose Bowl and the Sugar Bowl) in the 2020-21 season.

LSU and Clemson will play for the national title on January 13, 2020, and we can expect to see some very big numbers for that one as well.