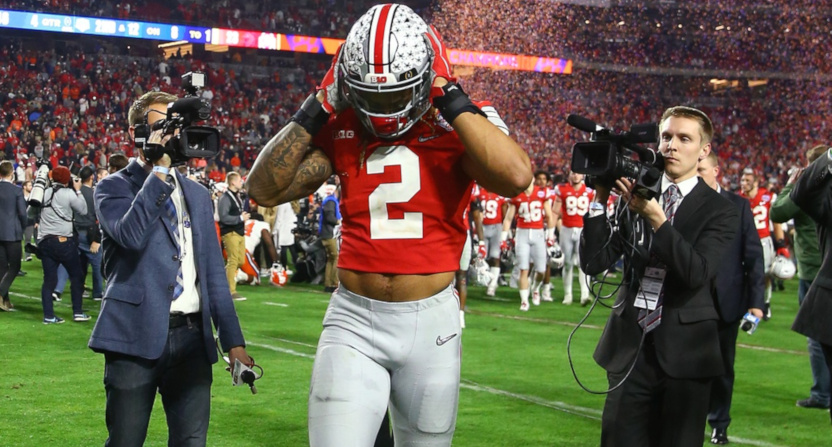 The college football internet is full of conspiracy theories, and most of them aren’t worth acknowledging. But as with hot takes contradicted by the facts, it’s sometimes worth noting when someone offers up a take that can be quickly refuted by a little research. The latest example of this comes after the Clemson Tigers’ 29-23 win over Ohio State Buckeyes in the Fiesta Bowl semifinal Saturday, which provoked some controversy over calls (especially an Ohio State fumble return for a touchdown that was reversed on review) and led to a lot of complaints on Ohio State fan sites and message boards. Those complaints get pretty funny when they get into the territory of claiming that this all happened because of an ESPN conspiracy to have Clemson advance rather than Ohio State, something that flatly contradicts the publicly-available viewership data. Here are some of those complaints (via Banner Society’s Alex Kirshner, who wrote a piece that also explores Buckeyes’ fans previous claims about ESPN). First, from a thread on 247 Sports’ Bucknuts site:

You’re incompetent if you think ESPN doesn’t have an agenda. Your act is getting old. The big ten is partnered with fox. Disney and fox hate each other. Disney will try to weaken Fox’s product and they don’t want us to have the national title label.

If you think that fumble for a TD overturn was properly called then you’re incompetent and shouldn’t speak to football.

Next, from a thread on independent site Eleven Warriors:

Look at the two officiating crews for the two games today. ACC called the LSU game and SEC called our game. Is this a coincidence? Or is this just a matter of ESPN vs Fox? LSU was clearly the better team, yet they got all the calls. Targeting on Wade? Roughing the kicker? All subjective calls that seemed to always go a certain way tonight. The officials on the field weren’t bad, but it just seemed every time there was a review, it went a certain “ACC Network on ESPN” way.

Or, from another Eleven Warriors thread:

ESPN got their dream wish LSU vs Clemson like they wanted the whole time, committee set it up perfectly with that bullshit move putting LSU 1.

Look, as we’ve noted before, there’s plenty of room for skepticism of ESPN’s business interests in college football. That’s especially true when it comes to ESPN executives’ roles in realignment discussions, or the network giving extra prominence to matchups outside the top 25 because of where those games are airing and the business relationship with the team in question, or to the network taking on-air shots at certain schools and conferences. And there’s definitely a sense amongst some Ohio State fans (whether it’s justified by anything or not) that ESPN isn’t favorable enough to them, especially by comparison to the treatment they’re getting from Fox.

But it’s a heck of a stretch to claim that a television network was able to influence an on-field outcome. The smart bias discussions have been about scheduling, studio show coverage and the like, not anything that happens in-game. And by any practical standard, calling LSU-Clemson a “dream wish” championship game matchup for ESPN is utterly absurd. That’s especially true when you look at how these teams performed in regular-season viewership; Ohio State was first, while Clemson was 12th. 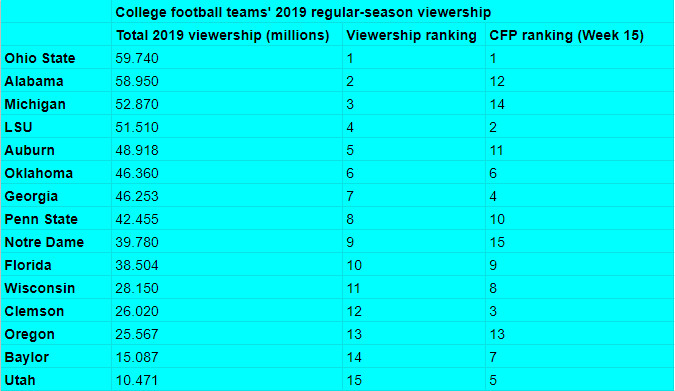 Sure, ESPN has the primary ACC rights deal and the ACC Network, so if all things were equal, they’d probably prefer an ACC team to a similar Big Ten team (they have the second half of the Big Ten rights behind Fox, and they don’t control the conference network, which is a Fox/Big Ten partnership). But that doesn’t mean they’d actually be able to do anything about that. And even more importantly, all things are not equal between these teams. Ohio State averaged 5.43 million viewers for regular-season games this year where we have viewership data, second only to LSU (6.44, and the actual numbers are probably closer as the OSU data includes some Big Ten Network games, while there’s no data for LSU’s SEC Network games). Clemson averaged 3.25 million viewers for their regular-season games where we have viewership data (not counting three on ACC Network), 12th amongst the CFP Top 15 (ahead of the conference title games). So Ohio State averaged 40 percent more viewers this year even with some conference network games.

Thus, suggesting that there’s an ESPN conspiracy to keep the Buckeyes out in favor of the Tigers is quite funny. Even if ESPN could somehow have that kind of on-field impact, it certainly wouldn’t be in their best interests to do so. And it also doesn’t make sense to argue that ESPN would take a lower title game audience in favor of future success for the ACC Network; for one thing, that network already has quite wide-ranging carriage, and for another, any ancillary future effect from Clemson appearing in the title game seems far lower than the boost ESPN would get from having a TV draw like Ohio State in that game. (It’s perhaps notable that the best national championship ratings to date by far came in 2014-15, the first year of the playoff, when the Buckeyes won.)

It’s all well and good to talk about how networks cover teams and if that’s related to their business interests. But suggesting that the networks somehow can influence on-field decisions is a step much further, and it’s a really wild step to take when you’re arguing that they’re engaging in those kind of shenanigans to bolster a lesser-watched school like Clemson over a viewership magnet like Ohio State. Plenty of people will watch Clemson-LSU in the end, but it seems likely that the numbers would be much higher still for an LSU-Ohio State game. And that’s a strong refutation of the absurd idea that ESPN was somehow behind Ohio State’s semifinal loss.