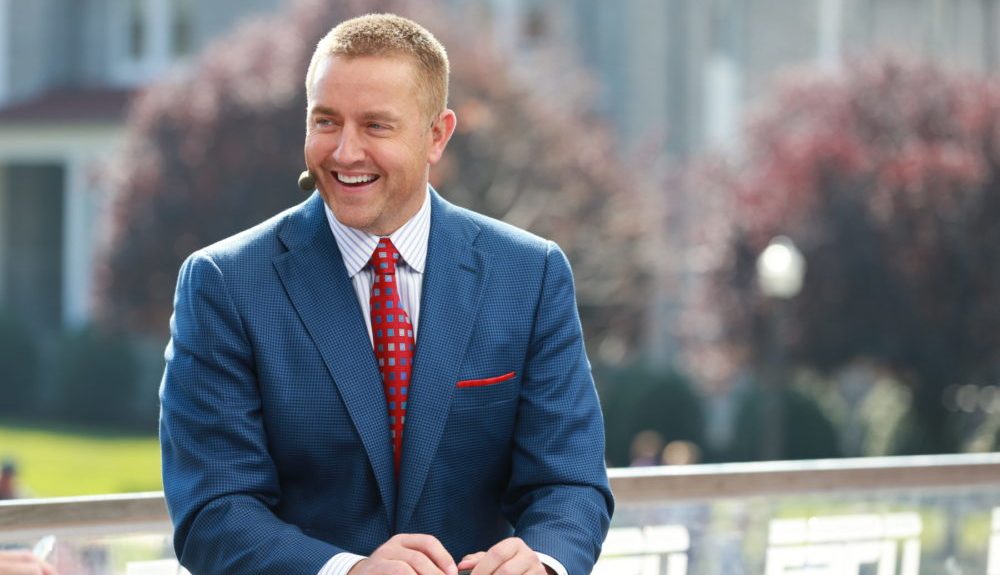 When you think of ESPN’s college football coverage, there are a few constants. There is perhaps no greater constant than College GameDay featuring Lee Corso and Kirk Herbstreit. We know that Corso’s time with the program is likely coming to an end soon, but could we also see Herbstreit leave the college game soon for NFL coverage as well?

Herbie called the Week 1 NFL matchup between the Steelers and Giants and he’ll call another one alongside Chris Fowler on Monday when the rescheduled Patriots-Chiefs game finally happens. That means he’s pulling double-duty this weekend as he’s also calling the Clemson-Miami game today. And while that might work for Kirk in the short-term, it’s starting to make some wonder if the longtime college football broadcaster is beginning a transition into the pro league.

As Jimmy Traina recently noted, Disney has their eyes on a second NFL package and more NFL content once the next round of television deals come up. And if they have more NFL games available for ABC and ESPN, they’re going to need to fill those broadcasting booths. Herbstreit could be perfectly positioned to make the move.

But would he be interested? During a media conference call on Friday, Herbstreit said he’s a lot more open to the idea than he might have been before this year.

I was blown away by how much I enjoyed that game, how much I enjoyed for me, it’s not the game itself… it’s the Wednesday, Thursday, Friday, Saturday, Sunday build-up towards the game and sitting down with the coaches, the coordinators, the head coaches, the players, and how incredibly candid they were and giving of their time that they were. To be honest, I was just a little bit, not intimidated, but I was just a little bit curious as to how they would handle Chris and Kirk coming in from college to do a Monday Night game, and they could not have been any more gracious. So that part kind of excited me that they were pumped that we were there to do their game, and then doing the game… even though we didn’t have one fan – it was one of those games we didn’t have one fan in the stands – and I had an absolute ball calling [Steelers-Giants] and it made me reflect a little bit, a little bit differently towards my future and what I might want to do down the road. Like I said, I hope to always do college football, but if NFL would be in my future, I’m a lot more open to that thought than I was maybe prior to that experience.

It’s all just speculation for the moment, but it certainly sounds like Fowler and Herbstreit could become a viable option for NFL broadcasts in the future if things open up for ABC/ESPN. However, it remains hard to imagine ESPN would want to remove Herbie from college football entirely even if that opportunity arose. There’s just too much goodwill and experience surrounding his time at ESPN covering college football to give that all away for one NFL game a week.

Of course, it also means that the next time there’s an opening (or potential opening) in the Monday Night Football booth, you can officially add Herbstreit’s name to the list. ABC is waiting to see how Steve Levy, Louis Riddick, and Brian Griese gel, but we all know how quickly things can change on MNF broadcasts.