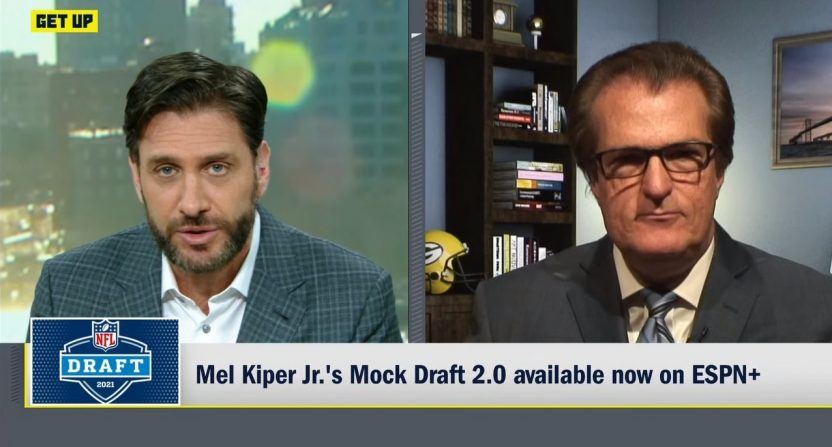 With Trey Wingo leaving ESPN last fall, the network was in need of an NFL Draft host this April. A year ago, Wingo hosted the ESPN/NFL Network Voltron of Draft coverage from Bristol (a role he held for several years), while Rece Davis anchored ABC’s coverage. Davis, NFL Live host Laura Rutledge, Sam Ponder, Suzy Kolber, or many other personalities would have been fine choices for the main broadcast this year, but ESPN is reportedly going in a different direction.

Instead, according to the New York Post, they’re going with Mike Fucking Greenberg.

Mike Greenberg will be the host of the NFL Draft for ESPN, The Post has learned. Story in a bit.

I’m sure Mike Greenberg is a nice enough guy. But there is no prominent ESPN personality (aside from maybe Stephen A Smith) that I’d less want to see in this role. Greenberg isn’t an NFL expert – he’s the host of a morning show and a radio show. In my opinion, choosing him over someone who actively hosts NFL studio coverage is a disservice to viewers. Instead of giving those watching the NFL Draft on your network an authoritative, thoughtful host, you’re giving them an overexposed, lukewarm-take merchant who might actually drive viewers to other networks.

More than anything, it’s just disappointing to see Greenberg get yet another plum assignment from ESPN. Plugging in Greenberg as host when he’s not involved in any of ESPN’s NFL properties feels forced and inauthentic but here he is getting tabbed to host the NFL Draft.

If NFL Network’s coverage is separate this year, and I’d wholly expect it to be, they have a real opportunity to attract more NFL fans that want authoritative views and less bullshit takes from their draft coverage.

I’m also hoping that ESPN is only using Greenberg, if he actually does end up hosting the Draft, as a one-year placeholder and they have a long-term replacement for Wingo in mind. Greenberg isn’t the long-term answer as the NFL Draft host, and it would be incredibly disappointing if ESPN viewed him as such. Furthermore, if they think he’s good enough for the Draft, what else is he good enough for? Sunday or Monday Countdown? The NBA Draft or Finals? The Home Run Derby? Wedging Greenberg into coverage where he doesn’t fit just isn’t a great idea, and if he hosts this year’s Draft, I’d feel a lot better about it if I knew this was a one-time thing, and not the first step towards Mike Greenberg creeping into other coverage for no real reason.

This is the reality of how ESPN and other media companies operate. Layoffs target more specialized and lesser known talent, while the network kowtows to its biggest stars and their agents, thirsty for additional platforms and reach. Are viewers demanding this? Do fans like seeing familiar faces replaced with talent already being stressed thin? The answer is no, and will always be no. We’ve learned this in the past with other similar experiments, but here we are again.