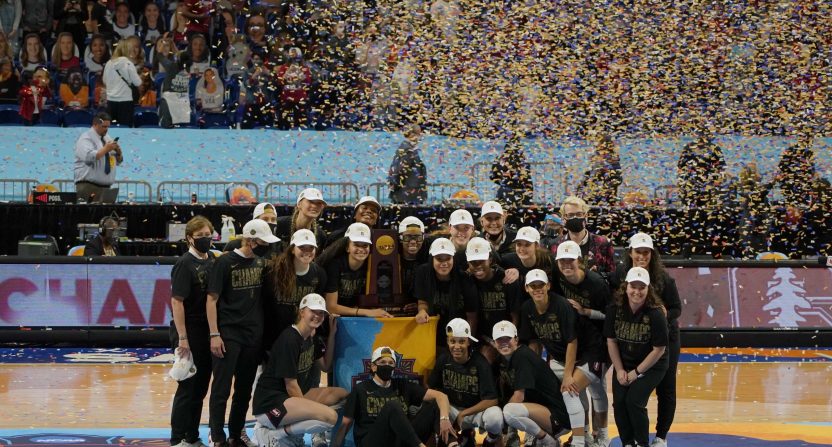 March is obviously a huge month for college sports, with the men’s and women’s basketball tournaments set to begin.

Well in advance of the start date, ESPN and Disney announced today that they’ve completely sold out of ad inventory for the women’s NCAA Tournament, which airs exclusively on ESPN’s family of networks.

“ESPN is dedicated to amplifying women in sports, and we are looking forward to this year’s NCAA DI Women’s Basketball Tournament,” said Sean Hanrahan, SVP, Sports Brand Solutions. “We are excited to see that our sponsors and advertisers have really leaned into our commitment to diversity in athletics and have flocked to these offerings.”

Most of that release amounts to a thank you note to brands and sponsors, but there’s a bit more to it than that. In recent years the disparity in college athletics between men’s and women’s sports have been exposed. Maybe most memorably in the respective NCAA Tournament bubbles in 2021, which saw various viral posts about the conditions women’s players faced.

Let me put it on Twitter too cause this needs the attention pic.twitter.com/t0DWKL2YHR

Last August, a report found that the television rights for the women’s tournament had been severely undervalued:

However, per an independent analysis from Ed Desser cited in the report, the women’s tournament alone would be expected to fetch anywhere between $81 and $112 million per year in 2025 when the current ESPN expires. It’s hard to know for sure because, per the report, the current deal “likely does not reflect the true value of the women’s basketball championship broadcast rights.”

There’s a slight irony in ESPN making sure to tout how impressive the interest is in the women’s tournament while they also benefit from what was found to be a discounted deal. At the same time, though, pointing out the early sellout of all ad inventory is a key counterpoint to the “No one cares about women’s sports” critique that gets levied whenever anyone dares to point out inequity. The money cares, and while it’s not a perfect measurement, it’s a lot harder to ignore.