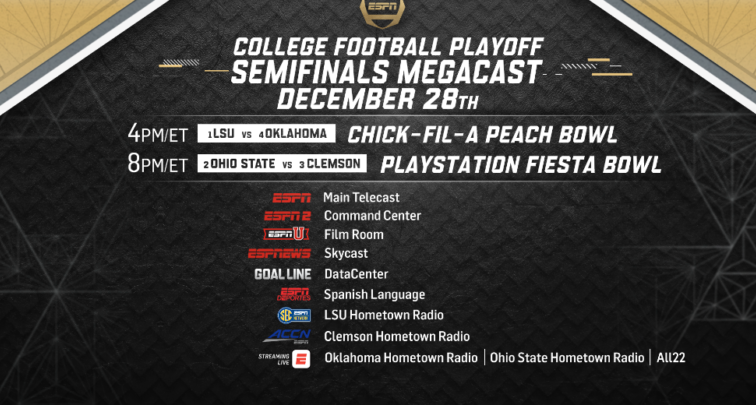 Annually one of the more overwhelming examples of ESPN’s sheer bandwidth, the network’s Megacast presentation of the College Football Playoff is returning for the semifinal round Peach Bowl and Fiesta Bowl contests.

The games (pitting LSU against Oklahoma and Clemson against Ohio State, respectively) air in a doubleheader on December 28th, and will include programming spanning pretty much ESPN’s entire family of networks.

ESPN’s Innovative Technology is the Backbone of MegaCast Production
The CFP Semifinals MegaCast begins with ESPN airing the traditional telecast, which features the network’s innovative technology combined with unique vantage points, providing fans with a state-of-the-art presentation. More than 50 cameras will be deployed inside Mercedes-Benz Stadium in Atlanta and State Farm Stadium in Glendale, Ariz. Featured in at least one semifinal will be:

In addition to the beefed up in-game production, there will be other network offerings as well, although the Coaches Film Room is now sadly just the Film Room.

No offense to Louis Riddick, Tom Luginbill, Emmanuel Acho, and Bobby Carpenter, who will surely do outstanding work, but part of the joy of past Megacasts included watching a random assortment of current head coaches tossed in a room for hours at a time, eating pizza and reacting to the action.

Something that is returning: the ability to watch the games with the local radio broadcast synced up. This year that expands to both the ACC Network and the SEC Network for Clemson and LSU broadcasts, respectively, while Ohio State and Oklahoma fans will still be able to find their local calls on the ESPN app.

The whole thing is perhaps slight overkill, but it serves to heighten the importance of the entire event, something ESPN is very good at doing.