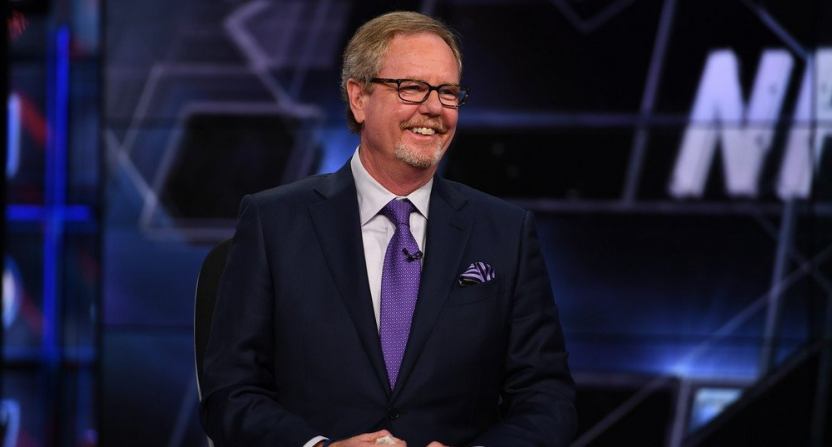 When ESPN had their massive spring round of layoffs in 2017, plenty of recognizable names were let go. Ed Werder was certainly one of them; Werder had spent nearly 20 years covering the NFL for the network, and as he covered the Cowboys he had plenty of airtime.

Now, as reported by Peter King (and then confirmed by an ESPN release), Werder is headed back to ESPN.

Werder confirmed the news himself:

I’m so incredibly appreciative of this opportunity to rejoin this fantastic group of people and to provide news, info and analysis. I love representing @espn. Now, with that, I have liveshots to do. https://t.co/C87QFRn35z

It’s believed that he’s the first employee laid off in 2016 (sic) to be rehired to full-time position since. The difference, most likely: Werder and his peers were let go in the John Skipper regime, and Werder was able to build a bridge to return with the new boss at ESPN, Jimmy Pittaro.

“When you were somewhere for 20 years, and you have allies in the building, and you never lost your love of the place, and you have dialog with a lot of people there over time, I hoped there would be an opportunity to return,” Werder told me over the weekend.

I asked Werder what it says that he was rehired—about him and about ESPN. “It says they’re emphasizing good journalism. I really feel relieved that we’ve reached a deal, and it’s final, and now it’s just the excitement of doing the job that I know I can do—and justifying the expectations that I have created for myself. I intend to.” Werder may cover more sports than football, and teams other than the Cowboys, the organization he regularly broke news on during his years there. He often rankled owner Jerry Jones with his reporting. “My contact list is strongest in the NFL, and my love is covering the NFL,” said Werder, 59. “But I’ve covered other sports, and I know I can.”

Werder covering other sports is the only real obvious and immediate adjustment to his role. ESPN’s Norby Williamson on Werder returning, from ESPN’s release:

“We’re excited to bring Ed back in this new role, where he can continue his outstanding work on the NFL and spread his wings in other sports as well,” said ESPN Executive Vice President, Event and Studio Production & Executive Editor Norby Williamson. “To have a journalist with Ed’s experience and storytelling ability join our incredible group of bureau reporters makes us immediately stronger.”

ESPN’s release also mentions that Werder received the Pro Football Writer’s Association Dick McCann Award in 2017, which came a few weeks after he was laid off.

As to why ESPN would make this decision now: King touched on how Werder was able to connect with the new ESPN regime, but there could be another factor too. Pitaro continues to angle for a stronger relationship with the NFL, something he’s tried for since shortly after he took over.

Other examples:
-Draft on ABC
-Hiring Jason Witten (which didn't work, but was something Jerry Jones and Roger Goodell wanted)
-Moving HQ and High Noon to ESPN2 on football Mondays

ESPN/ABC badly want in the Super Bowl rotation in the next round of TV rights.

Regardless of that, having Werder back at ESPN is good for the network, good for viewers who appreciate quality coverage, and good for Werder, who presumably never wanted to leave in the first place.