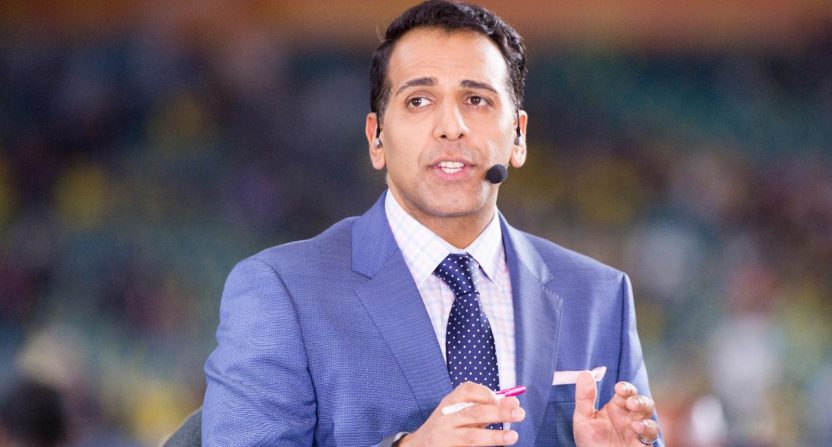 Awful Announcing has learned ESPN recently reached an extension with Adnan Virk to keep him at the network for the foreseeable future. Virk will continue to be seen and heard across a wide swath of platforms and shows that currently include College Football Final, Baseball Tonight, and studio coverage for college basketball, as well as ESPN’s limited portfolio of hockey properties.

It would’ve been hard to envision ESPN not retaining Virk, given the sheer mileage they get out of him. In addition to Virk’s aforementioned responsibilities, he’s a frequent ESPN radio replacement host (especially for Golic and Wingo), does some limited MLB play-by-play, and has also filled in on SportsCenter and Outside the Lines over the past year. He also launched his own movie podcast, ‘Cinephile’.

Despite the busy schedule, we’re told Virk will also be adding Wimbledon coverage to his responsibilities. Virk is repped by CAA’s Nick Khan.

Virk has been with the network since 2010, and recently retraced how he joined ESPN and expanded his role on a recent episode of the Awful Announcing podcast. I poked fun of Virk’s humble beginnings in 2012, when I tabbed him and Max Bretos as the “The most unrecognizable SportsCenter pairing ever.” I noted, “I’ve found myself enjoying some fresh blood like Virk, Bretos, and others getting a crack at ESPN’s signature program.”

Virk’s visibility took a major jump in 2015, when the network retooled College Football Final. That saw the end of tortuous tenure of Mark May and Lou Holtz, with Rece Davis stuck babysitting.

When reached for comment, Virk initially demurred. But when pressed, Virk joked, “I’m thrilled to still be lavishly overpaid”.

It’s an interesting time for talent to be negotiating with the network. We’re a year removed from the largest rounds of talent layoffs the network has seen, and we’ve since seen many other big-name departures. At the same time, ESPN has added some big names such as Katie Nolan, Adrian Wojnarowski, and most recently Keith Olbermann, as well as reported megadeals for prominent personalities like Mike Greenberg and Michelle Beadle. ESPN’s former president, John Skipper, was known to personally be involved in talent negotiations and some believe he overpaid in an effort to keep upstart competitors like FS1 and NBCSN at bay.

It’s early under new president Jimmy Pitaro’s tenure, so it’s difficult to gauge how talent negotiations have and will change.  And it’s hard to read too much into this extension, given Virk is such a heavily utilized asset spanning MLB, college football, college basketball, and radio. Going forward, hopefully we’re writing more stories about ESPN retaining key talent, opposed to the steady slew of stories we’ve done on ESPN and others making sizable workforce reductions.