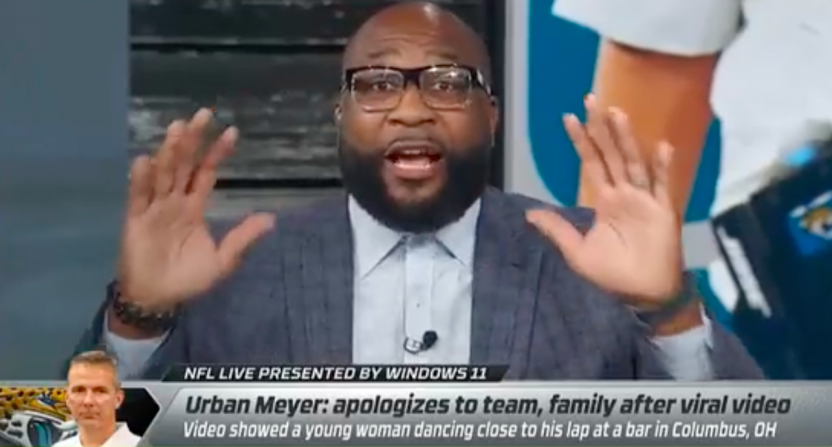 Urban Meyer’s reputation has been taking quite a few hits in recent weeks.

His time with the Jacksonville Jaguars has been a disaster so far thanks to an 0-4 start on the road to a pretty abysmal NFL season. Plenty of fans have been joking all season long that he’s already looking for ways out of town. His family is in the spotlight for disturbing reasons. And now a viral video showing him at a bar with a young woman who isn’t his wife has taken the internet by storm, causing him to publicly apologize for the “distraction.”

You could also make the case that everything that’s happened in recent weeks showed us that Urban Meyer is who he thought he was, to paraphrase a famous quote. And there’s a growing sense in NFL media circles that Meyer might not be cut out for the position he’s currently in.

On Monday’s ESPN’s NFL Live, both NFL analysts Dan Orlovsky and Marcus Spears went all-in on Meyer, his reputation, and why they’ve seen everything they need to see from him and his ability to be a head coach in the NFL.

“We got enough evidence about who Urban Meyer is, America,” said Spears on Monday. “We have enough. If you want to research it yourself, go ahead and do it. I’ve researched it. I’ve talked to people in circles. It’s enough out there for everybody to understand why Urban Meyer shouldn’t be the head coach of anybody.”

Marcus Spears and Dan Orlovsky call for Urban Meyer to be fired on ESPN Live over lap dance video pic.twitter.com/cbjTmGBSPS

“Shad Khan, you need to fire your new head coach, bro,” said Spears. “It’s time for Urban Meyer to be dismissed and relieved of his duties. This is not the first distraction, right? This is not a visceral reaction to what Urban Meyer did, even though there needs to be one to that as well. He brought in a strength coach that had racist history. He brought in Tim Tebow to play tight end, which he never did in the NFL before. This is a pattern that we’ve seen go on since Urban Meyer has been the head coach in Jacksonville.

“And then this particular situation. With a young quarterback, first pick, just married, 0-4, trying to win football games, and the coach is the exact wrong reason why they in the news. I played football nine years in NFL. Every head coach I ever had said, ‘don’t be the guy to take focus off of what we’re doing as a football team as we try to win games. It was a message that resonated throughout every locker room I’ve ever been in.

“Shad Khan, you on the clock, bro. It’s time for you to find another head coach for the Jacksonville Jaguars. And it needs to start, like, right now. Like today.

Orlovsky followed up Spear’s takedown by stepping into the shoes of Jacksonville quarterback Trevor Lawrence to try and make sense of what’s being asked of him.

“Marcus, you mentioned Trevor Lawrence, the young quarterback,” said Orlovsky. “I wanna put myself in his shoes and talk to coach Urban Meyer as the coach. It’s hard for you to lead me when you can’t lead yourself. How can I sit here in the locker room and listen to you preach about culture when you do things like this? My success is incredibly dependent on your ability to lead our organization. And if you can’t lead yourself to make consistently the proper decisions, then how can I trust my career with you? How can I trust that you’re gonna do what’s best for me and all of my teammates?

Urban Meyer’s no-good, very bad week is just getting started, but if these are the reactions he’s getting on Monday, we hate to see what people will be saying about him in the Jaguars drop to 0-5 this weekend.