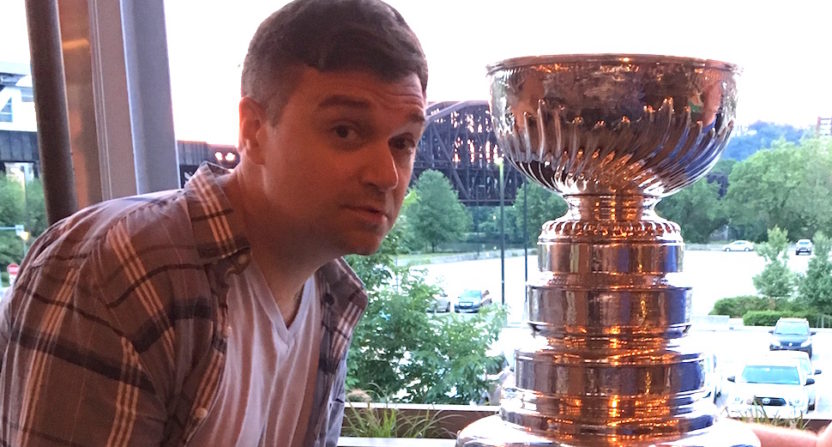 Back in April, when ESPN laid off many of its top NHL writers and analysts amid its larger talent purge, many hockey fans wondered whether the network was punting on the sport altogether. Nearly six months later, it appears there’s a little less reason for concern.

On Tuesday, ESPN announced it had hired Greg Wyshynski, the longtime editor of Yahoo Sports’ Puck Daddy blog. According to a release, Wyshynski will start next week as a reporter and analyst across multiple platforms, including SportsCenter. He will likely be ESPN’s most visible hockey voice, both online and — once in a while — on air.

“Greg is a trailblazer when it comes to NHL coverage and has cultivated a passionate following among people who care about the NHL, which includes both fans and league insiders,” said Mary Byrne, senior deputy editor, daily coverage. “We think he’ll bring an audience with him to ESPN and also find a legion of new readers, listeners and viewers as he delivers across platforms here. We’re excited to have him.”

Wyshynski announced in September that he was leaving Yahoo after nine years at Puck Daddy, the site he developed into one of the most popular sports blogs on the internet. His decision to seek “new challenges” was likely sparked in part by Yahoo’s choice to lay off much of his staff.

OK, PERSONAL NEWS time: After 9 great years as Puck Daddy editor, this is my last day at @YahooSports. Thanks for supporting our silly blog. pic.twitter.com/YBBaFgRGPA

Even with Wyshynski aboard, ESPN is far from able to match the deep roster of NHL writers The Athletic has assembled, but the Worldwide Leader is at least back on the board when it comes to hockey. In essence, ESPN has replaced Pierre LeBrun, Scott Burnside, Joe McDonald, Craig Constance, and several others with former MMQB reporter Emily Kaplan and Wyshynski. Though we won’t call that an even swap, the network is clearly committed to at least some hockey coverage.

Wyshynski talked about the move on his personal blog, touching on what he hoped to accomplish at ESPN.

Now, hockey and ESPN haven’t exactly been, you know, synonymous. And I haven’t shied away from lamenting that through the years: The time the NHL was pushed aside for Texas Hold’em on television or those times it wouldn’t get featured on Big Important Lists or when the game highlights would air about 30 seconds before the end credits on SportsCenter. And we can still lament these gaffes and foibles together; only now I might actually have a chance to “well, ACTUALLY…” a colleague that, like, ranks Secretariat ahead of Mario Lemieux on the all-century list.

Which is, again, why I’m salivating at this challenge. For nine years at Yahoo, I banged down doors to get hockey noticed. I knew how to pitch our coverage to a general audience without sacrificing our hockey cred or alienating the hardcore fans that read us. And it wasn’t easy finding a space for hockey stories on Yahoo.com, what with the continued existence of the Kardashians. But we made our case, and it was featured.

He also mentioned his social media use in the aftermath of Jemele Hill’s suspension, and how he would have to learn where the lines are.

Many of you are probably wondering how your old pal Wysh’s wacky opinions and frequently colorful syntax fit in with the ESPN culture. Believe me, I’ve wondered it myself. Having the Jemele stuff going down as this announcement is made, and while I’m tweeting about the Penguins visiting Trump, has been interesting, although not nearly as interesting as being the lead story on Breitbart the day before you’re leaving your job. As I’ve learned at previous jobs, the only way to find out where the lines are drawn is to push the envelope as far as you can before crossing them. So this will be a mutual journey of discovery.

In many senses, the way ESPN has reshaped its NHL coverage exactly mirrors how it reshaped its NBA coverage, letting Marc Stein, Chad Ford, Henry Abbott and others walk, then bringing in Adrian Wojnarowski from, yep, Yahoo. In both cases, we initially thought ESPN didn’t want to cover the sports in question, when in fact the network simply wanted to cover them more concisely.

The Wynshynski hire won’t make hockey fans totally forgive ESPN for under-covering their sport and then laying off its few NHL authorities, but it’s a start.