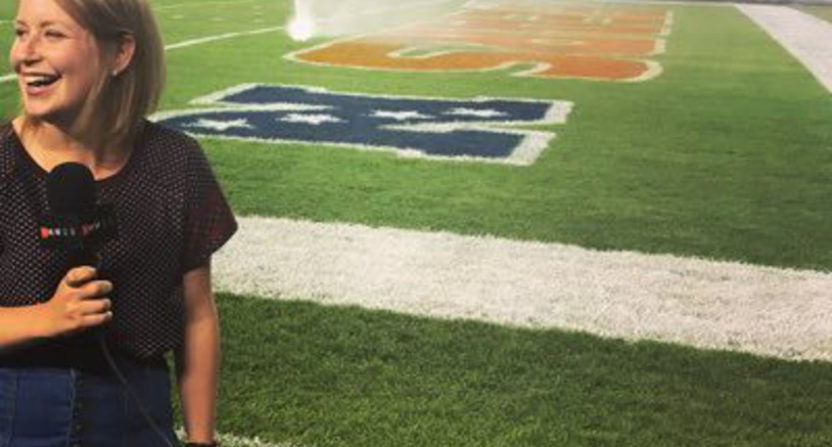 One of the biggest stories around the ESPN layoffs in April was how many NHL writers were let go. Hockey was far from the only sport hit, of course, with notable cuts also happening across the board in sports like college basketball and baseball and further notable names axed on the NBA beat, the NFL beat and the college football beat. However, the NHL cuts looked particularly like ESPN was getting out of covering the sport at all. That was especially the perception after Craig Custance exited in May, following the likes of Pierre LeBrun, Scott Burnside and Joe McDonald in April.

Apparently, that’s not quite true. Emily Kaplan (of Sports Illustrated and The MMQB) announced on Twitter Thursday that she’s heading to ESPN as a national NHL reporter. This confirms Ryan Glasspiegel’s report at The Big Lead earlier this week. Kaplan had already mentioned on fellow MMQB writer Albert Breer’s podcast that she was leaving, but not officially announced where she was going. Now she’s done that:

Anyone who knows me knows hockey has always been my love. Thrilled to be joining ESPN as a national NHL reporter.

It’s excellent to hear that ESPN still plans to do some of their own NHL coverage, and that’s a change from the last few months. They’ve still done plenty on SportsCenter, of course, with regular Barry Melrose segments during the playoffs and Steve Levy on-scene with Melrose for the Stanley Cup Final, but the written coverage at ESPN.com has been pretty weak following the exits of those writers, with the main original piece that got any traction being an easily-mockable take from David Fleming (who hasn’t usually covered hockey at ESPN) on the legacies of Sidney Crosby and Evgeni Malkin. Having a dedicated national NHL reporter should hopefully lead to better-quality work than that.

Kaplan seems like a strong hire, too. She’s done an excellent job at SI and The MMQB over the past four years, writing interesting pieces on everything from Erin Andrews‘ reactions to her stalker and her battle with cancer to the Bears’ drafting of Mitchell Trubisky to the history of the NFL’s goal posts to maintaining Lambeau Field’s grass to the unlikely path of playoff star Chris Matthews to CFL players’ offseason jobs. She’s demonstrated an ability to handle some of The MMQB’s regular features too, such as 10 Things I Think I Think. Before that, she worked for The Philadelphia Inquirer (covering Penn State football), The Boston Globe (as an intern), and the Associated Press (as a stringer), which is a pretty solid resume. And it’s good that she has a love for hockey; the sport’s U.S. fanbase isn’t the largest, but it’s highly passionate, and it deserves coverage produced by the passionate.

This is also a loss for Sports Illustrated in general and The MMQB in particular, as Kaplan was an important part of their football coverage. Kaplan’s the second long-time The MMQB staffer to leave this year, as Greg Bedard was laid off in March. They still have plenty of talented football writers, but it will be interesting to see if they replace her, especially in the wider environment of Time Inc. layoffs.

However, this new job also doesn’t seem like an easy position for Kaplan to be in. She’s now at an outlet that used to have numerous very well-known hockey writers in LeBrun, Burnside, Custance and McDonald. Those writers all have their fans, and ESPN has already taken lots of criticism for those layoffs. And some of that criticism may well continue towards Kaplan, maybe with constant comparisons to the people she’s (essentially) replacing. Some of that already started on Twitter Thursday, with a few people both throwing some shots at her and saying ESPN doesn’t care about hockey:

I mean, congrats on the dream job… but didn't they just lay off some national hockey reporters? #ESPNLogic

Except for that @espn does not cover the NHL. Guess we won't be seeing you much, or when we do you will be buried behind womans softball

So ESPN decided they needed one. Cool

does this mean espn is going to stop ignoring hockey?

It should be noted that those tweets represent a minority of the reaction (the majority of it was people congratulating Kaplan on her new job), but there are a significant number of them. And it’s not fair to criticize Kaplan for ESPN’s past moves on the hockey front (she had nothing to do with the previous layoffs), but those layoffs did produce a lot of anger towards ESPN from hockey fans. It also seems likely that no matter what Kaplan writes and no matter how well she does it, it’s going to produce at least some “We preferred LeBrun” reaction.

None of that’s to say that this is a bad move, or that Kaplan won’t be able to thrive despite the criticism. Plenty of people have gotten mad online at her in the past (the national NFL beat is certainly known for that), and she’s dealt with it well. But it’s worth noting that she’s heading into a tough spot with big shoes to fill, and with lots of people already upset at her company’s NHL coverage. We’ll see how she does with this new job.