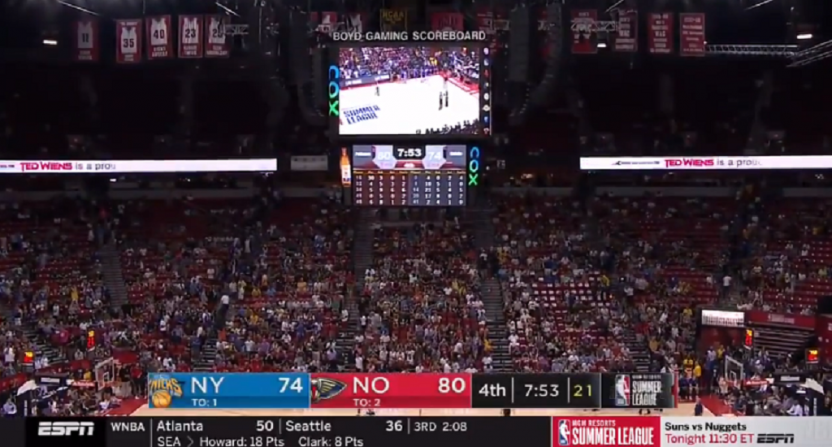 Update: The epicenter was in Ridgecrest, CA, the same location as the July 4th shaker. This one, though, was much stronger at 7.1 magnitude. That's larger than the magnitude of the 1994 Northridge earthquake. https://t.co/bAq2EASFas

BREAKING: A 7.1 magnitude earthquake shakes Southern California, one day after most powerful quake in 20 years https://t.co/AIobHW3uEM

The earthquake was felt all the way in Las Vegas, where Zion Williamson made his NBA Summer League debut for the New Orleans Pelicans against the New York Knicks at Thomas & Mack Center.

The game was shown on ESPN, and Mark Jones stopped his traditional play-by-play of the game to tell viewers in the fourth quarter, “Folks, we’re experiencing an earthquake right now.”

Jones and Burke explained how the building was shaking, and that fans were headed for the exits. About 10 seconds later, the game was stopped.

The scoreboard located above center court and surrounding speakers continued to sway in the arena for several minutes.

The scoreboard is swaying and all the players have gone to the bench. pic.twitter.com/jYU05l5m2R

Rafters, scoreboard, and speakers shaking at Thomas and Mack pic.twitter.com/RsZQvpN5K2

Fans are leaving. Josh Hart, Brandon Ingram just hauled out. Scoreboard and speakers on the ceiling are shaking. The floor was legitimately moving.

The game was initially suspended, and eventually postponed.

For precautionary reasons, the remainder of tonight’s @NBASummerLeague action at Thomas & Mack Center has been postponed.

Burke called the experience “one of the scariest moments of her life.”

“To feel the earth beneath your feet move, to see a scoreboard of that size directly above our heads swaying in our direction… Mark, it was one of the scariest moments of my life. I don’t know how to describe it.”

Burke also said how she was shocked to hear the plan to simply suspend the game initially, due to the scoreboard “swaying significantly.”

Next door at Cox Pavillion, the Orlando Magic and San Antonio Spurs played through the earthquake. Here’s how it all looked on the NBATV broadcast:

Update: The Summer League action at Cox Pavillion has since been postponed as well.

Well … after initially resuming games in the Cox Pavilion, Vegas Summer League officials have postponed the remaining games in that gym, too. Games done for the night.