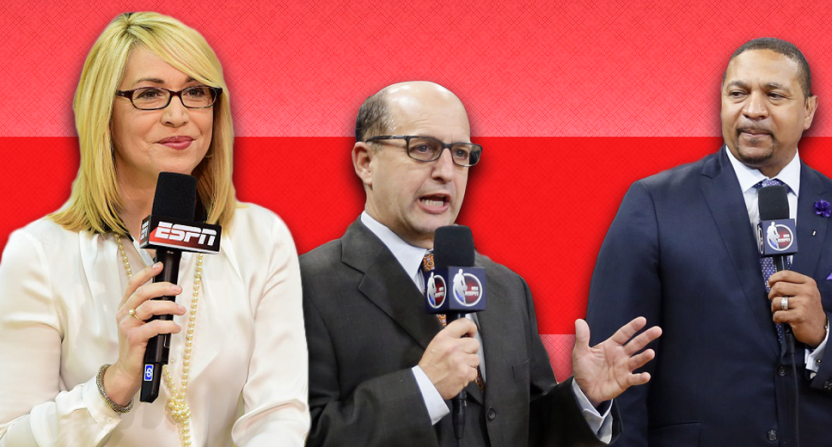 Any change to a lead announcing booth is a major deal. They are not made lightly and are not dictated solely by fan sentiment and social media feedback. These changes often take many years to occur past when you think a move would have been made (Tim McCarver, Billy Packer, and Phil Simms being some examples). A move to change a network’s top announcing booth requires a lot of moving parts with agents, contracts, reputations, optics, and egos.  The status quo is often good enough and not worth messing with. But with that said, it’s kind of hard to ignore the obvious:

People want Doris Burke to be a lead analyst, and the majority of people with that opinion want her to replace Mark Jackson.

Doris Burke is one of the best analysts in the NBA. Every game she points out aspects of the game I haven't noticed. She enhances the game experience.
Mark Jackson makes me feel dumber. The most analysis he's ever done is to say, "momma, there goes that man!"

Maybe a hot take, maybe not: ABC/ESPN needs to bump Doris Burke up to the lead analyst role. She’s terrific. And the Van Gundy/Mark Jackson shtick is getting old.

I’m not the best person to be writing this. I’m not a card carrying member of #NBATwitter. I don’t watch all of the games. I can probably name only 1 or 2 players on the league’s crappier teams. I wouldn’t say I’m a huge Jackson hater or a Burke zealot. She’s just better. A lot better. And there is such a strong consensus that you have to wonder when, if ever, a change will be made.

Consensus in sports media is tough because taste is subjective. Some people like Skip Bayless in the same way people watch CBS shows you cringe at seeing promos for. Take Joe Buck, for instance. A third of our readers would say he is awful, a third would say he is very good, and a third would have no opinion on him. He’s familiar to most fans, stays away from controversy, and you more or less know what he’s going to give you. I only mention this because he’s not going anywhere. It takes a pretty large wave of criticism for an extended period of time for a network to make a move. I’m of the thought that a Doris Burke wave is beginning to form and could hit the beaches in the next year or two.

It’s a combination of a few things. One—people just don’t really like Mark Jackson (we’ll get to that in a bit). Two—people really like Doris Burke. Three- I’m not sold that Jeff Van Gundy and Mark Jackson enjoy being paired up together (video related to these tweets later in article)

Is Mark Jackson going to murder Jeff Van Gundy in his sleep tonight? It sure looks like it.

Burke has been on quite a career ascension of late. She just signed a new contract with ESPN. She is about to complete her first year focusing solely on the NBA, where she’s usually a game analyst up until the final two rounds of the playoffs (when ratings spike) where she transitions to a sideline reporter (a damn good one).

In that role (which she’s done for the Finals for ten years now), she thrives in the little spurts you’re given of her. It’s possible ESPN would lament moving her away from this role, although Lisa Salters is certainly a very solid option to have and works with ESPN’s lead announcing team when Burke is an analyst the rest of the year.

But having Burke doing sideline duty is a constant reminder and comparison of a better talent that is not being fully utilized. Her quick hits are nothing amazing as it’s hard to really hit a home run in that role given guarded coaches and limited time on camera. But those limited spots leave viewers wanting more Burke and that’s only reinforced when viewers are transitioned back to Mike Breen, Van Gundy, and Jackson.

Doris Burke, who is better at basketball analysis than Mark Jackson, among others, says LeBron is cramping

What I hope ESPN does — even though it's not in her contract — is to assign Doris Burke to the analyst seat for one game during next year's NBA Finals & make Jackson/Van Gundy the sideline analyst. Not only has Burke earned that platform, ESPN would get great pub for the move. https://t.co/SH63fPvgfy

Breen I think is amazing. Maybe one of the most underrated people in sports media. Ask a casual fan (NBA or general sports) who announces the Finals and I imagine many can’t name Breen. Van Gundy is an acquired taste. Some people find him whiny. Others find him insightful, knowledgeable, and funny. I like him, but paired with Jackson? Not so much.

Van Gundy is a bit of a strong voice who often can deliver heavy doses of criticism. Most of the time, those comments seem to hit their mark. He’s selective and he mixes in enough positive analysis as well as self-deprecation where I don’t view him as being overly problematic to the booth.

Jackson, though ,is more of a cantankerous personality and that’s where the problem lies. It’s too much criticism delivered with a bit of attitude. It’s rarely light-hearted. It’s rarely positive. That’s not to say his analysis is frequently wrong or over the top, it’s just predictable in terms of tone and sentiment. Frequently it’s a bit too much and that’s an opinion that seems to be pretty widely shared by viewers. In laymen’s terms, I don’t think I would enjoy grabbing an adult beverage with Mark Jackson.

His disposition often looms over the broadcast, and at times him and Van Gundy’s butting of heads can be distracting.

I’ll avoid going too far in my analysis of Burke other than saying she’s good… consistently good. Never a distraction, always engaging and composed, and most importantly delivering poignant analysis that never seems to be too critical or jaded. People just like her more and that’s not hard to figure out.  In an era where any female being elevated within this industry typically brings an tsunami of really awful comments from almost always anonymous social media accounts, Burke is the one female we’ve covered where there just seems to be a nearly total acceptance of her abilities and fit covering a men’s league.

Currently Burke sits as the analyst on ESPN’s third-string NBA announcing team. A leap up to number one sounds a bit ridiculous given this is her first year primarily in that role but let’s consider a few things:

– Hubie Brown, the network’s #2 team analyst, is 84 years old. Promotions at that age just don’t happen in this business and really any business.

– Burke just signed a new deal with ESPN. The network is certainly a fan of hers.

– Jackson is regularly a candidate for head coaching jobs, which would be a nice soft landing should ESPN begin to plan for a move down the road (a career change looking better than a demotion)

whoever made the decision to keep mark jackson on the broadcast while doris burke is stuck on the sidelines should be tried at the hague https://t.co/NzOhUsf1MA

I’ve been racking my brain trying to think of one reason Mark Jackson should be doing these games instead of Doris Burke. Turns out there isn’t one. #NBAPlayoffs @espn

Additionally, I wonder if ESPN feels the need to stagger a move like this given some backlash (a lot of which was very swampy but some very legitimate) on elevating female talent elsewhere such as Sam Ponder, Jemele Hill, and Beth Mowins, with Jessica Mendoza being the closest comparison. I doubt that plays any role here, but sadly there is a sliver of ESPN’s audience (like Don below) who vocally is against any promotion of a non-white male regardless of merit because they feel the network has already “gone too far” in promoting female and minority voices.

So… that’s a long ways of saying I think Burke is destined to get that job at some point. Jackson coaching again is the easiest path to that happening. Short of that, his contract expiring ,or just a rare bold move here by ESPN would be your next big bet. Until then, we’ll just stew (and complain) as we’re treated to her in small doses while enduring a less-than-ideal situation the rest of the broadcast.