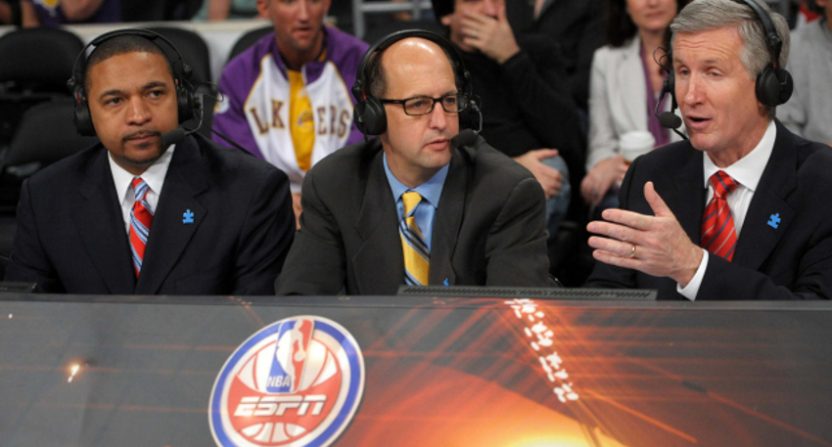 NBA fans will be listening to Mark Jackson for some time to come. ESPN announced Tuesday that they’ve signed Jackson (seen at left above) to a new multi-year deal. Here are more of the details from their release:

ESPN today announced it has re-signed NBA game analyst Mark Jackson with a new multi-year deal. Jackson, who is part of the longest-tenured NBA Finals broadcast team with Mike Breen, Jeff Van Gundy and Doris Burke, will continue to provide commentary for the highest-profile games on ESPN and ABC.

Jackson is a key part of the broadcast teams for the NBA Finals, ESPN’s exclusive coverage of the Conference Finals, the NBA Saturday Primetime on ABC series, and several other significant regular-season and NBA Playoffs telecasts.

“Mark’s expertise as a former head coach and former player, combined with his passion for the NBA, make him one of the best game analysts in the sport,” said Mark Gross, ESPN senior vice president, production. “Mark is beloved by NBA fans and well-respected in the basketball community. Beyond that, he’s a terrific teammate to Mike, Jeff, Doris and our entire crew.”

Jackson isn’t beloved by all NBA fans, especially those not thrilled with his repeated rounds of criticism of the Golden State Warriors (and of specific former players). Those might have to do with his head coaching stint with the team (2011-14) not ending well; Jackson was fired after a first-round loss to the Los Angeles Clippers in that last season, and the Warriors went on to win the NBA championship the next year under Steve Kerr. Jackson hasn’t seemed to take that well, and has criticized the Warriors at almost every opportunity since.

Still, it makes some sense for ESPN to extend Jackson. He has long been a prominent broadcaster for them (2006-11, 14-present), there aren’t a ton of complaints about him (other than from those upset with his Warriors’ takes, but many others have been known to rant about that team too), and there have been some rumors from time to time about him returning to coaching. Keeping him around maintains the feel and chemistry of that top broadcasting team (which, again, seems to generally work decently, or at least not draw too much intense criticism), and it should dispel some of the speculation about his future for at least the time being.

It should also be noted that this doesn’t really have much to do with ESPN’s cuts, which included a lot of NBA writers. For one thing, the cuts on the NBA side appear to have been to pave the way for Adrian Wojnarowski (and perhaps others from Yahoo’s The Vertical), and for another, reporting online and appearing on studio shows is a far different task than game analysis. ESPN is going to be covering NBA games through 2024-25, and they’ll need people to call those games. If they had decided to move on from Jackson, it likely would have been another analyst who got his spot, not one of the cut reporters.

In any case, this is ESPN keeping the status quo on their top NBA broadcast. That will sound good to some, won’t matter much to many, and will annoy some (perhaps especially Golden State fans). But it’s a pretty logical move, and it’s understandable why they did it. We’ll see how Jackson does over the next few years.