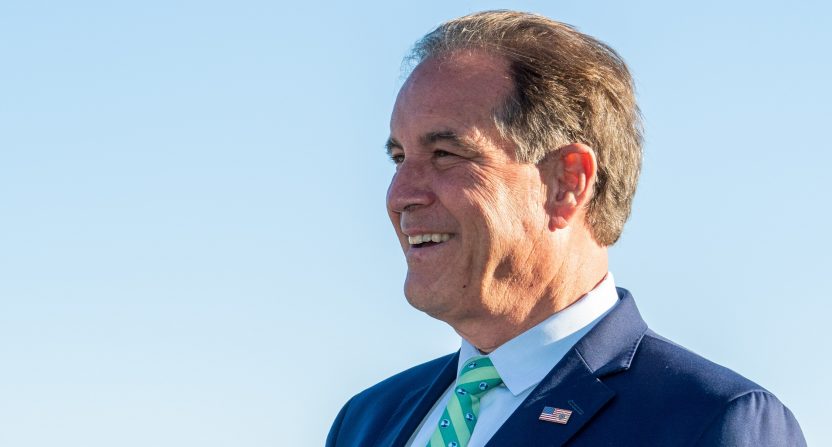 Jim Nantz is synonymous with CBS at this point, having spent more than thirty years with the network, including a few decades as the top voice for every big event the Eye has the rights to broadcast. That includes this weekend’s Super Bowl.

However, Nantz is currently embroiled in a contract negotiation, fed in large part by his apparent desire to be paid more than his NFL partner Tony Romo, which would mean more than $18 million per year. As the negotiations have played out, there’s been an obvious question hanging over proceedings: where is Nantz getting any leverage? Which other network has both the open slot and the willingness to give him the kind of contract that would make CBS consider ponying up.

Suddenly, seemingly out of nowhere, we have a contender! Mike McCarthy at Front Office Sports wrote this week that ESPN is interested in Nantz’s services:

If Nantz hits free agency this summer, ESPN is interested in possibly making him the face of its NFL and Masters golf coverage, said sources. With ESPN parent Walt Disney Co. poised to land one — if not two — NFL TV packages, Nantz could be on the mic as ABC/ESPN broadcast future Super Bowls.

But a CBS Sports spokeswoman made clear the network wants to retain its longtime star. “We expect Jim to be at CBS Sports for many years to come,” she told FOS in a statement. ESPN declined to comment.

So, how serious is ESPN here? That’s hard to say. Whenever a piece pops up like this during negotiations, it’s always important to consider, well, why. Nantz and Nantz’s management are just as aware that there’s a lack of leverage for him. Fox and NBC aren’t going to dump Joe Buck, Al Michaels, or Mike Tirico. ESPN, though, could perhaps be spun as a possible suitor; the new Monday Night Football booth was fine-to-good, and it’s unlikely ESPN is going to break that up any time soon. (And if they do end up splurging on a name at some point, it feels more likely to be on the analyst side of the booth.)

That said, it’s certainly interesting to consider the parts in play here. CBS just inked Ian Eagle to a new deal this week; the report of ESPN’s possible interest followed within days, and includes an anonymous source noting that Ian Eagle is no Jim Nantz.

But CBS miscalculated if they think they can use Eagle as leverage in the Nantz negotiations, warned one source.

“Could [Eagle] call the Final Four? Sure. But I don’t think there’s any real play where Ian Eagle becomes Jim Nantz for CBS.”

This feels a lot more like a negotiating tactic than anything else, at this point. CBS props up their leverage by extending Eagle, a sudden report appears touting another network’s interest. It’s hard not to connect those dots.

When ESPN and CBS get into a bidding war for your services: pic.twitter.com/fl0yGpeWxb

In the end, though, it’s even harder to imagine Nantz leaving. Others have done it, yes, but considering the various properties CBS offers Nantz, his longstanding relationship with the network, and plenty of other factors combine to make it pretty unlikely at this point.

Much more likely: Nantz signs a new deal with CBS for a very high number at some point in the near future.