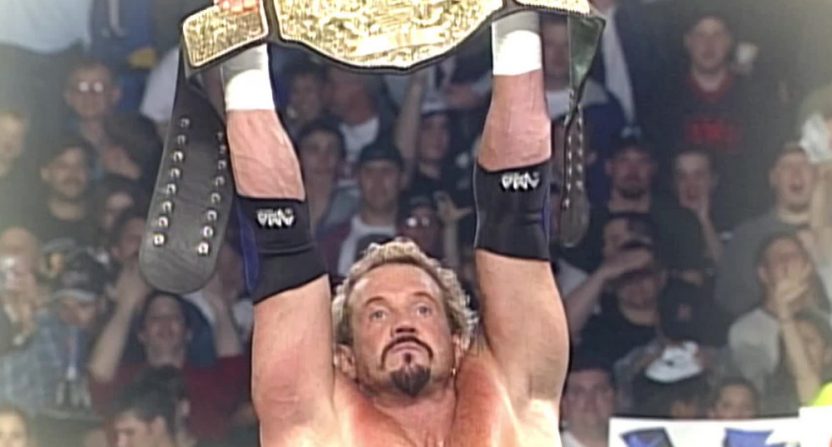 Dan Le Batard’s discussion of in-ring and real-life wrestling feuds with 2017 WWE Hall of Fame inductee Diamond Dallas Page Tuesday appeared to generate an actual feud. On his ESPN Radio show, Le Batard did a long interview with DDP, and it was going swimmingly for the most part. Then Le Batard asked about memorable beefs, Page responded civilly about his in-ring beef with Randy Savage in 1997 for about two minutes, then Le Batard clarified that he meant Page’s out-of-ring beefs with Ric Flair, Scott Steiner and more, and that eventually led to Page losing it when Le Batard started talking over him and making claims about the Steiner feud. Here’s just the clip of Le Batard interrupting Page and Page going off on him (context follows):

Here’s the full five-minute context of the discussion of beefs in and out of the ring:

So, when LeBatard clarified after the Savage response (about 2:15 in) that he meant out-of-ring feuds, Page started responding to that normally as well, telling a story about how he’s about to hang out with Flair right now. Le Batard then interrupted him to relay to the audience what Flair once wrote about Page. Page seemed to take that in stride as well, talking about how they made up and ended their feud. But then Le Batard started talking over Page once Page brought up his feud with Scott Steiner, saying “You tried to rip his eyes out! Or did he try to rip your eyes? Who tried to rip whose eyes out there? Somebody tried to rip somebody’s eyes out!”

That’s amazing, and it led to quite the discussion between Le Batard, co-host Stugotz and their producers about if Page was really mad (most thought that) or just in-character mad (Stugotz thought that), plus Le Batard reading a text of complaint from “Serious Wrestling Guy,” a discussion of one producer’s expression during the Page interview, and a producer saying Page is never coming on the show again:

This maybe makes more sense when you consider the apparent incident between Steiner and Page that Le Batard was talking about. Here’s a description of that from a 2013 eWrestlingNews piece, which talks about how Page’s then-wife Kimberly accused Tammy “Sunny” Sytch of having drug paraphenalia backstage, Steiner got mad and chased Kimberly Page out of the building, and DDP and Steiner then later got into it backstage at the next taping:

As the story goes, DDP, who was waiting for Steiner behind the curtain, confronted the former NCAA Division I All-American wrestler as soon as he made his way backstage. The two allegedly exchanged some heated verbal insults before things got physical. Apparently the two ended up in a clinch, and depending on multiple versions of the story, DDP put a front-face-lock of sorts, or a guillotine choke by today’s mixed-martial-arts standards, on the larger grappler. The two were supposedly separated, but unfortunately for DDP the situation didn’t end there.

Again, there are a number of variations to the story, but apparently Steiner broke free from those holding him back at the time and allegedly went completely berserk. Page, who tried throwing a kick at Steiner, ended up on the ground as the result of a double-leg-dive, or a traditional amateur-style takedown from the man with the legitimate wrestling experience. Here’s where things got ugly, and where details become a bit scarce.

Steiner reportedly went for DDP’s eyes. That’s right, Steiner tried ripping DDP’s eyeballs out of the socket, rendering the “People’s Champion” at the time (Page was calling himself that before “The Rock” was in WWE) blind. Going for the eyes in a legitimate fight is one of many tricks professional wrestlers were taught in the old days when instructed how to really “handle yourself” in a legitimate altercation. “The eyes are the groin of the face,” as was once referenced as a joke on the hit-comedy television series “The Office.”

…DDP, who had come off as a hero to his fellow WCW employees for standing up to someone who was perceived as a bully, and during the initial scuffle reportedly looked to be holding his own in an impressive fashion, was a mess. His face was apparently in bad shape, with obvious damage suffered during their brief exchanges. Page later claimed that his face resembled “Freddy Krueger” from the popular horror movie series, “A Nightmare On Elm Street.”

Page has talked about this before, though, so it seems to be Le Batard’s method of talking about this (interrupting, and not being sure if it was Page or Steiner who went for the eyes) that really set him off. Whatever precipitated it, it certainly made for one of the most memorable radio confrontations in a while.