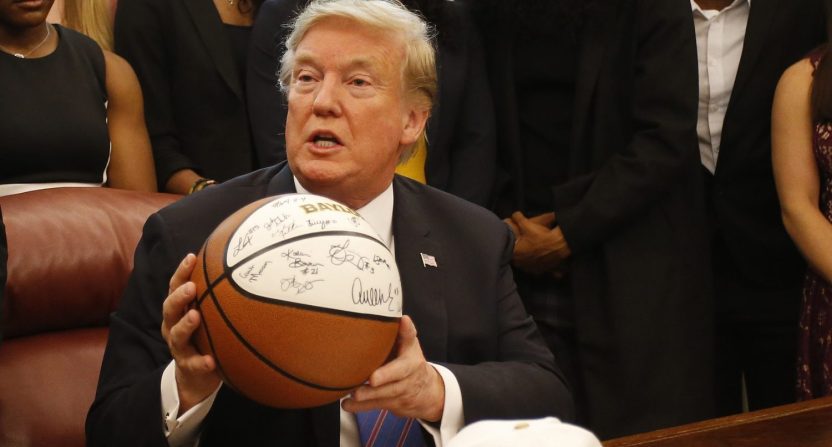 After LeBron James criticized reporters for not asking him about the controversial Jerry Jones photo, Bomani Jones reflected on athletes speaking about social and political issues.

The Washington Post shared a 65-year-old photo of Jerry Jones as a teenager, where he was among a group of young white men preventing Black students from integrating an Arkansas high school. James believed it was a controversy the media should have asked him about, especially on the heels of questioning him about Kyrie Irving’s recent antisemitic controversy.

On the latest episode of his ESPN podcast The Right Time, Bomani Jones was joined by Domonique Foxworth, and they discussed James’ gripe. Jones believed there was a larger point to be made by LeBron considering owners of professional sports franchises never have to answer for their mistakes the way players do. But he considered the ‘why didn’t you ask me about Jerry Jones?’ complaint to be “ridiculous.”

“There was a thing about five years ago where people talked a lot about this network and people talking about political things that were not about sports,” Jones said, referring to the notion that ESPN doesn’t always stick to sports. “And I actually empathize with the bosses a great deal on this situation and here’s why. People determine how adept you are in talking about these things by evaluating whether or not they agree with what the thing is that you said. It’s not necessarily about how adroitly you can navigate the topics.”

“The truth is, most people are not qualified to talk about these things before the world because talking about these things before the world is very, very difficult,” Jones said of athletes such as LeBron addressing social and political issues. “Being able to handle follow-up questions is very difficult. You just get lucky, because most of the people across from you are not qualified to ask follow-up questions.”

Despite the fact that social issues are difficult to talk about in a public setting, more people seem willing to talk about those issues even when they’re not fully informed on the subject. According to Jones, we have former U.S. president Donald Trump (seen above at a 2019 ceremony for the Baylor Bears’ women’s basketball team) and his ignorance to thank for that.

“This happened in the height of Trump,” Jones said. “Trump took away the idea that you had to know what you were talking about before talking about something and being respected on whatever it is. It became, ‘If this dude can be president, why can’t I say what it is that I feel?’ We really had to open the door on ‘If that’s how you feel’ when the President of the United States kicks it in a certain way. That’s where we wound up. And so maybe that’s where we get with LeBron when he throws this sort of whatabout thing out there.”

If the general public responds to the president obtusely riffing on a polarizing issue with a shoulder shrug, then it gives everyone confidence to address the same topic without vitriol.