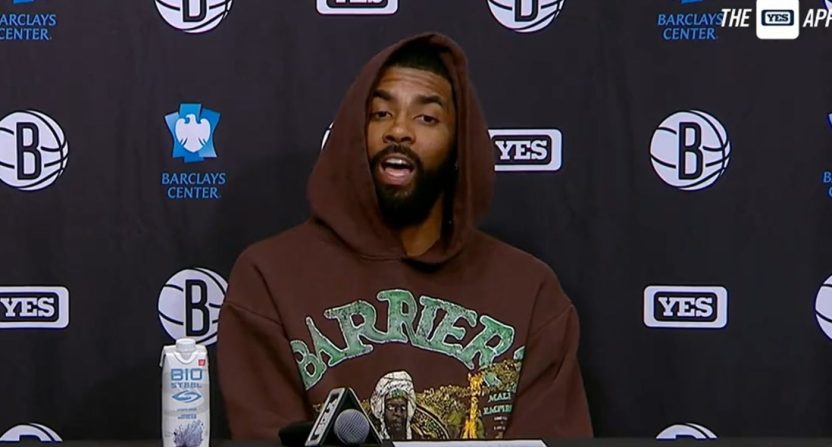 Kyrie Irving has used his social media platform to amplify Alex Jones and an antisemitic film, but he has no desire to answer questions about it.

Thursday afternoon, Irving shared a link for his massive Twitter and Instagram following to a 2018 movie titled Hebrews to Negroes: Wake Up Black America. The film is based on a 2014 book that has been heavily criticized for being filled with antisemitic disinformation. Irving’s post came just a few weeks after he used his social media platform to amplify dangerous conspiracy theorist Alex Jones.

“I’m in a unique position to have a level of influence on my community and what I post does not mean that I support everything that’s being said or anything that’s being done, or I’m campaigning for anything,” Irving said following the Brooklyn Nets Saturday night loss to the Indiana Pacers. “All I do is post things for my people and my community and those that it’s actually going to impact. Anyone else that has criticism, it obviously wasn’t meant for them.”

Irving has 4.5 million Twitter followers and 17.5 million followers on Instagram. As the NBA superstar stated, he is in a “unique position to have a level of influence on my community.” But when pressed on the decision to promote a film based on antisemitic disinformation which accuses Jewish people of worshipping Satan, Irving bizarrely downplayed his level of influence.

“We’re in 2022. It’s on Amazon, public platform,” Irving said of the film. “Whether you want to go watch it or not is up to you. There’s things being posted every day. I’m no different than the next human being, so don’t treat me any different. You come in here and make up this powerful influence that I have over the top [and say], ‘You cannot post that.’ Why not? Why not? Everybody posts everything else.”

Among the “everything else” was Irving’s recent decision to share a video of Alex Jones on his social media platform, which ESPN’s Nick Friedell questioned during Saturday night’s tense press conference. Irving stated he does not stand with Alex Jones despite recently sharing a video from the conspiracy theorist. Irving did, however, support the dangerous podcast host’s claims about secret societies and cults corrupting America.

“That was a few weeks ago,” Irving said. “I do not stand with Alex Jones’ position, narrative, court case that he had with Sandy Hook, or any of the kids that felt like they had to relive trauma. Or parents that had to relive trauma. Or to be dismissive to all the lives that were lost during that tragic event. My post was a post from Alex Jones that he did in the early 90s or late 90s about secret societies in America and cults. And it’s true.”

Friedell followed the Alex Jones question by asking Irving about the film he “promoted” on Thursday. Instead of addressing the issue, Irving attempted to make himself out to be the victim, blasting Friedell for “dehumanizing” him with his line of questioning. The heated exchange eventually caused Nets PR to end the presser. But as Irving exited the room, he had one last comment directed at Friedell.

“Wish you would feel the same about Black reproductive rights, about the things that actually matter, instead of what I’m posting,” said Irving. “Fix your life, bro.”

Irving has not apologized or removed the post in question. According to the 30-year-old NBA star with massive influence, he’s just attempting to elevate his consciousness in response to attending an education system that “indoctrinated and brainwashed” him on what he considers to be a deceptive history.