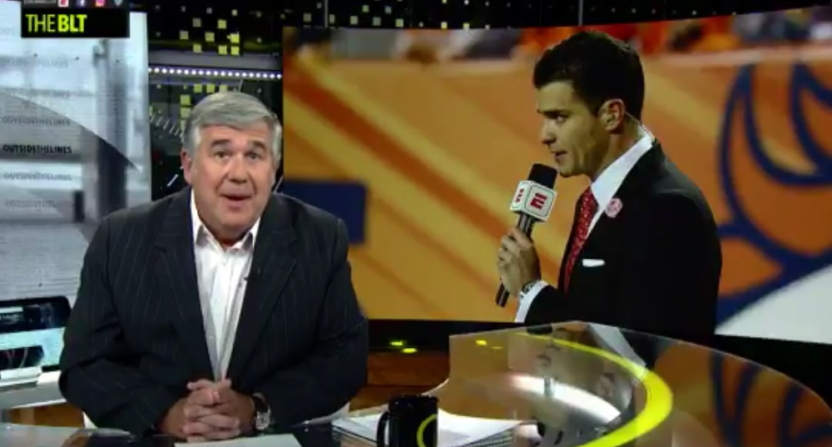 Following Twitter criticism of Sergio Dipp’s sideline reporting Monday night, Dipp’s ESPN colleague Bob Ley took to the airwaves to defend him Tuesday. As part of his “The Bob Ley Take” segment on Outside The Lines, Ley talked about his previous experience trying to give an interview in Spanish, how hard that was, and how he was “ticked off” by the “internet trolling” of Dipp for reporting in a second language:

A guy I"m proud to call a colleague, @SergioADippW pic.twitter.com/V62gMlt4Es

Here’s a transcript of Ley’s segment, which included Dipp’s statement addressing the backlash:

“Eight years ago when I was covering a World Cup qualifier in San Pedro Sula, Honduras, a local television producer asked me if I would be interviewed there, could I try to do it in Spanish? Now I know a little soccer Spanish to get around the game a little bit, so I said I’d give it a shot. I’ll tell you, after 20 seconds I had to stop, apologize, and say, ‘Guys, I’m sorry, we’ve got to do this in English.’ I’ve worked with many people in that sport from all over the globe who comment live on the air, English is their second language, and my respect for them doing that is absolutely unbridled.”

“So the internet trolling of my colleague, Sergio Dipp, last night really ticked me off. Sergio was working the sidelines of our NFL Monday Night Football nightcap. His first report was not as smooth as he would want. You’ve probably seen it, it’s all over today. Enter the trolls. But Sergio does not need me to say anything today. He said it online.”

[Dipp’s comments]: “So what I wanted to do was show some respect making my debut as a minority on American national TV, on the most heartfelt day in this great country, made up by immigrants. And in some people’s perspective, it all went wrong. But I truly meant no disrespect, because all I wanted to do was to show some love to these two historical head coaches. Hopefully I’ll have another chance.”

It’s interesting to see Ley use his substantial platform to defend Dipp this way, and he makes a valid point about the difficulty of doing television in a second language. It can be hard enough to do TV in your first language, after all. But Dipp certainly has a at least one prominent ESPN coworker in his corner.