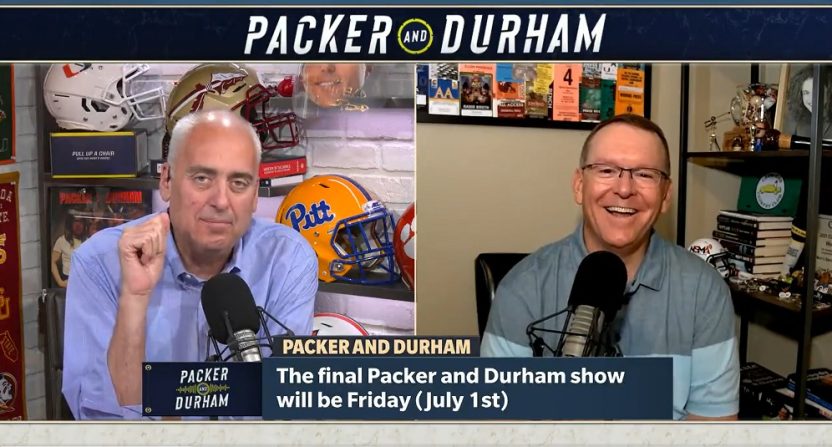 On Wednesday, ESPN announced a change to ACC Network programming.

The final episode of the network’s morning show Packer and Durham will air on Friday, July 1st. The show was a staple on ACC Network since its launch in August of 2019.

An announcement from Packer And Durham: pic.twitter.com/DocDmcZP0m

In a pair of statements, both Mark Packer and Wes Durham expressed their feelings about the show and its end.

Mark Packer: “What started out as a crazy hunch on satellite radio turned into a live TV show from my basement…with dogs, too! 1,028 shows…659 of them on TV. Unbelievable. The entire ESPN staff did a remarkable job. I really enjoyed spending my mornings with Wes Durham. He’s a Hall of Fame broadcaster, and he’ll be great in his future ventures with ACCN. I can’t wait see how our network continues to grow in scope and content. It’s a real honor and pleasure to be a part of ACCN.”

Wes Durham: “I am grateful to have been part of Packer and Durham for more than 650 shows on ACC Network. Pack has been great to partner with and his creative instincts in talk format on radio and TV made our 1,000+ shows together terrific. The support and encouragement we have received from the fans, coaches, student-athletes and administrators in the ACC has been just incredible and I look forward to continuing those relationships in the years ahead. I’m incredibly excited to expand my play-by-play schedule in football and basketball moving forward and to continue being a key part of the future of ACC Network and ESPN.”

Both Packer and Durham will continue to be involved with ACC Network.

If there’s a time to end a college sports studio show, it’s in the middle of the summer, so the timing here makes sense. ESPN did not immediately announce its plans to replace Packer and Durham on the air, but another studio show would make sense. The short-term plan appears to be live event replays (which, given that we’re going to be in July in a couple of days, makes sense for the time being), and depending on how much ESPN wants to cut costs, that might be the long-term play as well.