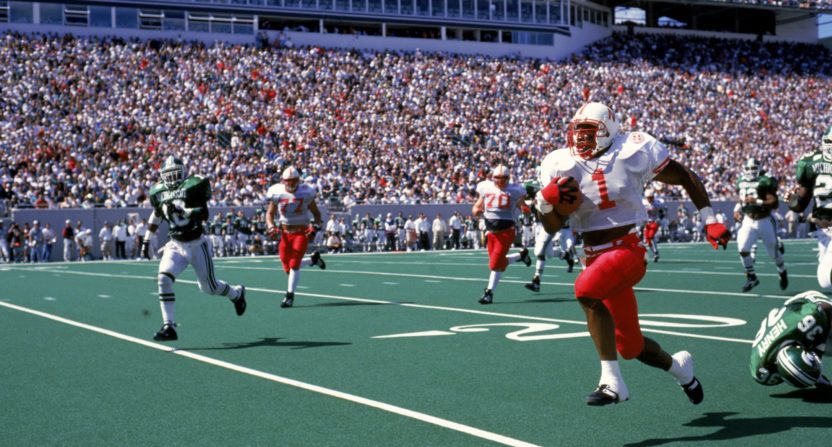 Last February, director and producer Eric Drath (he won a Sports Emmy in 2009 for directing HBO’s Cornered: A Life In The Ring, directed 2013 30 for 30 film No Mas for ESPN, and did a bunch of other directing work for ESPN, including 2011 ESPN Films doc Renee, two 30 for 30 shorts, and a bunch of Marvel Origins projects) did an interview with Omaha, Nebraska NBC affiliate WOWT about what he described as an upcoming 30 for 30 on the 1990s Nebraska football teams that would likely premiere in the fall of 2016. Now, a year and a half after Drath’s interview, ESPN said Wednesday the project “will not be moving forward.” Here’s their statement, provided initially to Josh Peterson of Omaha radio station 1620 The Zone:

.@USC1620 just received an official statement from an ESPN spokesperson on ESPN’s 30 for 30 project on Nebraska football: pic.twitter.com/1sjdPumzkZ

It’s notable that ESPN never officially announced this film, so perhaps Drath’s February 2016 interview suggested they were more firmly committed to it than they actually were. But he made it sound close to finished and confirmed at ESPN then. Here’s the key part of what he told WOWT’s Ross Jernstrom in that interview:

Ross: What are your plans for the documentary?

Drath: “Probably what is going to happen is we are going try and finish it up early spring and enter it into a couple film festivals, because that’s what ESPN Films does a lot of times. Then it will premiere, we are hearing, sometime in the fall just in time for football.”

That piece also describes it as “the upcoming ESPN “30 for 30″ documentary” and said it “is expected to premiere this fall”; neither of those is a direct quote from Drath, but both seem reasonable based on his comments there.

This isn’t the first time we’ve seen a 30 for 30 talked about and then not actually happen, or not actually happen along the initial lines. A case in point is Cleveland sports documentary Believeland, which initial director Kris Belman promoted numerous times in interviews, including in an August 2013 Cleveland Magazine piece that said a rough cut would be ready by February 2014. That project then fell off the radar before resurfacing in February 2016 with new director Andy Billman; it premiered at the Cleveland International Film Festival that March, then aired on ESPN that May.

Another example (with some notable differences) is Down In The Valley, the 2015 30 for 30 on Kevin Johnson and the Sacramento Kings’ arena fight that was completed and premiered locally in Sacramento, but was pulled days before it was set to air on ESPN after Deadspin outlined a series of sexual assault allegations against Johnson. At that time, ESPN’s John Dahl (vice president and executive producer of ESPN Films and Original Content) said “When [director] Jason Hehir and we collectively agree that the film is ready and we are comfortable with it, then we will pick that air date.” That still hasn’t happened, and it seems it may never happen at this point.

As ESPN’s statement notes, they do always have many stories in production. It’s perhaps not surprising that some of them don’t make it past the production stage; 30 for 30 has a reputation for quality, and they have to be careful what they release in order to maintain that. The Nebraska story may have been particularly difficult to tell well, too, as it involves not just championship teams (undisputed championships in 1994 and 1995, a split one in 1997), but a whole lot of controversy, especially around running back Lawrence Phillips and his cases of assault on women. And it doesn’t help that Phillips is dead (he passed away in 2016 in prison, in what was ruled a suicide) and can’t comment, and that then-head coach Tom Osborne is 80, retired, and went on to a career as a politician and administrator, so he might not want to say too much about the controversial sides of his old Nebraska teams either. That could make this tough to find the right balance and the right tone.

We’ve reached out to Drath for comment on this project and his future plans, if any, for it. We’ll update this post if we hear from him.