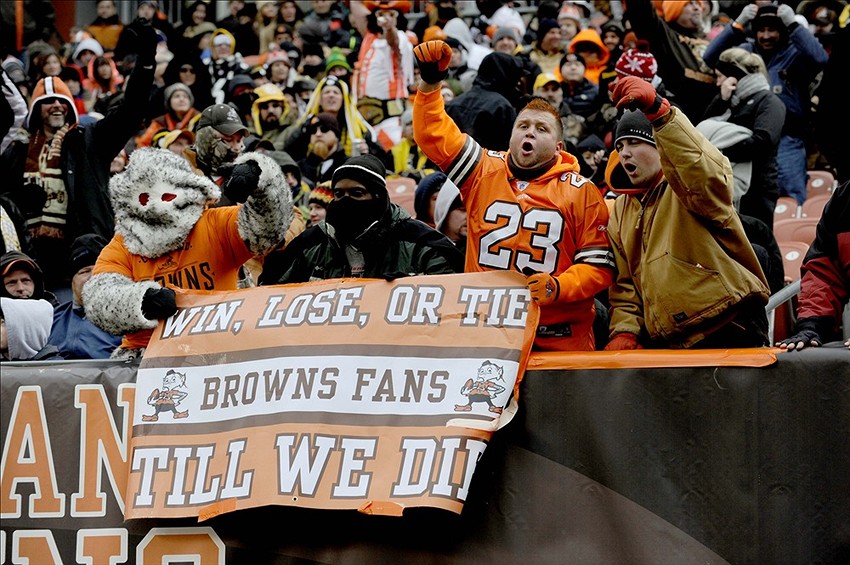 Most Similar To – The Band That Wouldn’t Die, Catching Hell

Review –  I don’t have much to say about Believeland. It’s like if someone introduced you to a new person and your reaction was “I liked him. Seemed like a good guy” and then your inquiring friends would press “Ok… but seriously what did you think?” to which you’d reassure them, your initial non-descript answer was genuine.

I liked Believeland. It was a good story and it was told well. I’m a nit picky reviewer and even in the films I put in the top 20 of the now 80+ film series, I usually have some critical notes. Believeland doesn’t have much sticking out, although one could argue that while the narrative was about three pro teams failing to win a championship for a city spanning half a century, the film was pretty Browns heavy with the Indians getting probably only 10-15% of total airtime. I’m not even sure that comment has much merit because the breakdown of the film’s focus is probably proportional to the heartache each team has caused fans.

There is not much wasted time in Believeland. A 90 minute doc with commercials is really the perfect runtime as often the rigid set lengths required by ESPN can seem too lengthy or too short. Believeland really glides along from Cleveland heartache to Cleveland heartache, never stalling out or going down a dead end road. The film jumps around a bit so it doesn’t conform to any chronological order of storytelling. More or less, it’s chopped into ten minute chapters with the Browns getting about half of them.

If you’re a Cleveland fan, you’ll enjoy the film. It was made for you, not made to poke fun of you. It’s pretty comprehensive, although I imagine a true Cleveland fan will point out some omissions or areas that didn’t seem to to get the right amount of focus or context. One thing a friend of mine who lived in Cleveland for a handful of years inquired about was if the film spent much time talking about or to some of the more well known diehard fans. He listed off some fans and stories and commented “I was hoping the people of Cleveland would be showcased as they are the heart of the city and won’t let it die even in the face of adversity.” I’m not overly familiar with some the fan-centric stories he listed. Believeland does speak with a lot of fans (mostly celebrities), players, coaches, journalists and broadcasters so it does seem authentic to Cleveland but if others were looking for that fan-base centric POV, they may come away disappointed. (Although I feel writer Scott Raab in particular was a dependable interview and guide to 50 year plus of agony Cleveland has suffered.)

If I had one comment, I’d say the film was light on its usage of highlights. If I had to guess, I think this was a creative decision knowing Cleveland fans probably can’t get the various pivotal moments out of their head, so why over-utilize them or over-emphasize them wth music, effects, and replays. Nothing gets skipped or not shown, but as an outside fan at times you may have preferred to drill down a bit more on some of the larger moments.

Andy Billman gets high marks as director of this film. He’s been involved in dozens of ESPN projects but this is his first foray as director. If you recall, ESPN handed this film to Kris Belman but as things didn’t progress to ESPN’s liking, Billman was tapped later to resurrect the project. Outside of getting LeBron James to participate and my personal suggestion of maybe investing some time into rehashing the recent QB history of the Browns, Billman gets pretty high marks for his effort.

Speaking of the director change from Belman to Billman, I think this film in particular highlights how shrewd ESPN is becoming with 30 for 30.

Cleveland’s suffering (especially now that I’ve viewed Believeland), does feel underreported nationally compared to championship droughts of teams in larger media markets like the Cubs and the Red Sox. ESPN was confident they had a good documentary topic here and looked to have it produced (other networks rely mostly on inbound pitches rather than pitching their own concepts). They easily could have just moved forward with Belman’s version and have it be a substandard installment but ESPN opted to quit funding that project and went into another direction. In this new age of cost cutting for ESPN, you wonder if that will continue to be the case or if the quality control won’t be as assertive.

Believeland wraps up its focus on the Browns with about 15 minutes left on the film and then turns to the Cavs and LeBron (the film conveniently doesn’t really focus too much on ESPN’s role in The Decision). The film ends on what is basically a “LeBron came BACK! The Cavs are good! The suffering COULD end!” and the timing of the film again shows how shrewd ESPN is. I’m sure Believeland will do well ratings-wise, but putting it right before the Eastern Conference Finals (a round LeBron has got to the last five years), this doubles in serving as a promotional piece of content for ESPN’s coverage for the rest of the Cavs postseason run. While it’s not a perfect film, the timing, intended audience, focus, and tone is all perfect in terms of juicing interest in the Eastern Conference Finals and potentially beyond. I actually can’t think of a previous installment that was as perfectly well thought out in terms of having a broader business impact beyond its airing.

While not one of the best 30 for 30’s, we’re now at a place with eighty plus films into the series where not having that distinction doesn’t mean it’s not worth your time. Given the amount of ground covered, well thought out structure and pacing, and raw emotion (high marks to the film’s coverage of Earnest Byner’s infamous fumble which was aided by his heart wrenching comments on it), Believeland is a solid watch regardless of your opinion or interest in Cleveland sports.