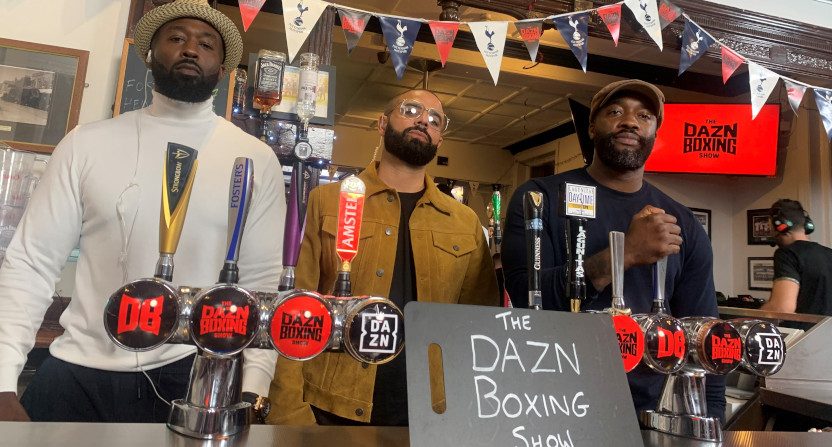 Streaming service DAZN has long been building their brand around boxing, especially in the U.S., and they’re now furthering that by boosting their studio content. In particular, they have The DAZN Boxing Show, which streams in full on their service daily from Mondays through Fridays and has special editions around live fights. Saturday’s highly-anticipated Wilder-Fury III fight in Vegas will mark the first time they’ve sent that show to a fight not primarily on DAZN (they have the rights to the fight in Germany, but it’s an ESPN+ and Fox Sports PPV in the U.S.), with hosts Ak and Barak and contributors Chris Mannix and Sergio Mora all on location for preview content there.

This is just part of the DAZN on-location plan, as they’ve also had daily content from Liverpool around the Liam Smith-Anthony Fowler fight there Saturday (which they are airing in the U.S. and the UK). But Wilder-Fury III is notable as the first fight where they have a studio show without having U.S. or UK rights. And in an interview earlier this week, DAZN senior vice-president (subscription marketing) Rob Stecklow told AA it’s just the start. He said they’re committing to covering all major fights, regardless of where the fight is actually airing.

“We’re building a global boxing service,” Stecklow said. “Obviously, one of the steps to that is getting your hands on as many live fights as you can, and we do that across multiple markets, from as big of names as you can get right down to great fights that fight fans will love every week. But what we realized is that we really also have to create content to keep people coming back during the week.”

“So The DAZN Boxing Show was born of that. We had been creating a lot of different content, different segments, we had Chris Mannix and Sergio Mora doing stuff, we had Ak and Barak doing different things, we had various guests come on, and we would package those things together. And then we decided to put them all together as a daily boxing show, sort of our SportsCenter, for lack of a better way to explain it. So it was for boxing fans ‘Hey, come on, we’re going to serve that all up to you, it’s all top information.'”

He said it soon became apparent they needed to cover a wide range of fights.

“We realized also that we can’t just talk about fights that DAZN carries. If you’re a boxing fan, you want to hear [about other events]. We think of boxing as a great soap opera. There’s so much around each fight, all the boxers, all the promoters, fights that are going to happen, aren’t going to happen, judges’ scoring cards, you name it. There’s so much to discuss.”

And Stecklow said the response to that from fans is what led to going on the road to fights like Wilder-Fury III where they don’t have key rights.

“And this past weekend, we were actually out at the AJ [Anthony Joshua] fight in the UK at Tottenham Stadium. And we’re a global broadcaster, and we have the rights to that in the UK. But through our relationships, we carried what we deemed as a great pre-fight show. We had it Thursday and Friday from a few blocks away, and Saturday, we’re in the stadium itself, with the boxing ring behind our setup. And this allows us to really take it to the next level; you have different trainers and fighters and celebrities and whoever’s a part of that big event stopping by.”

“So we thought ‘Hey, this is really interesting’ for what’s not a DAZN event with the global markets, including the U.S. And this weekend is the first time that we’re going to a fight that for the first time I would say is not primarily a DAZN fight. We have the rights in Germany, so that’s great there, but obviously not in the U.S. and the UK. But we understand that our fans want to see the latest from what’s going on in Vegas.”

Without being the primary broadcaster of a fight, DAZN is limited in what they can carry, but Stecklow said there’s still a lot of value to what they can get from being near it.

“Ak and Barak, our two hosts, they’ll be getting a lot of sights and sounds over the next few days. [They’ll get] the weigh-ins, the press conferences, hopefully talking to trainers, hopefully get [Top Rank CEO] Bob Arum and the fighters and some of the undercard fighters just to really bring the flavor of what’s happening in Vegas, to continue to feed all the boxing news and notes we can to our rabid boxing fanbase.”

And he said that’s boosted because of their global relationships with promoters.

“We have relationships with a lot of different promoters. Obviously, this weekend is through Top Rank, and they’ve been pretty good about giving us a lot of access. There’s a line that they will draw [versus actual event rightsholders ESPN and Fox], but we’re going to be in the media center, we’re going to be around the events, we’ll get access to some of the fighters, and to Bob Arum, hopefully. So that comes out of having some of these global relationships and being partners outside of the key markets that Americans are used to.”

Stecklow said that support hasn’t been universal so far, but he thinks they’ll ultimately be able to convince other broadcasters it’s positive for DAZN to be there, as that helps boost the appetite for the actual fight.

“We’re still trying to get across to the industry that ‘It’s good to have DAZN there covering boxing.’ Quite honestly, as a broadcaster, I’d be excited if someone else was coming in and helping me to draw more buzz around a fight, and that’s exactly what we’re doing.”

And he said there’s value for DAZN in being there even when they have limited or no rights for the actual fight.

“We’re deeply embedded into boxing now as a true global boxing broadcaster. So even if we didn’t have the rights in one market, we’d still want to be there.”

He said this is all part of their wider strategy to engage fans, and regular studio content is key there, especially to help fill voids between live events and detailed documentaries.

“As a sports broadcaster and a streaming service, we want to drive you to engage more than just for live events. Across a lot of sports, that could be just one or two days a week. In a lot of our markets, we’re built around European soccer, or football, playing on the weekends, and then there’s some fixtures during the week, maybe one or two times a week.”

“Everything we do, it’s all about engagement. So the first thing that DAZN had gotten into was longer-form documentary-style programming, a little more high-end, take six months to develop a great project. And we did a great one here in the U.S. around the Joshua-Ruiz rematch, we had a great piece recently around [Cristiano] Ronaldo. Those are great programs and we know that those drive a lot of engagement, but it’s really hard for us to pump out 150 of those.”

“So the studio programming is feeding the weekly, daily narrative. And then you have these longer-form pieces that keep you engaged and interested that may come on quarterly. And then obviously every week or weekend, there’s live action as well. So for us, if you want to feed the sports fan and keep them engaged with DAZN more than once a week for an event or a fixture or a boxing match, this was really the best way to do it, daily programming.”

Stecklow said boxing was a natural sport to expand studio coverage in, as it’s one of the key parts of DAZN’s global business. But it’s not going to be the only sport they’re planning to cover this way.

“It’s really important. Right now, our global business is built around boxing. As you know, sports rights are difficult to get a global clearance; we have it in [some] boxing, and then we recently announced the [UEFA] Women’s Champions League, which we’re really excited about. That’s only going to grow over time, and we’re treating it like we would any other top-tier sport on our platform.”

“We’re now talking around creating content daily for that league as well. And so now as we grow as a company internationally, we’re using boxing and Women’s Champions League. In some of our more mature markets, we have top-tier rights, like Serie A in Italy, Bundesliga in Germany, and others. But boxing, a. it’s a truly global sport, and it’s one where the rights are, I wouldn’t say easier to acquire, but there’s a path to acquiring global rights. …It’s a fun and exciting time for DAZN to service boxing fans all over the globe.”

Stecklow said he thinks this approach of covering more and more fights on location regardless of who’s airing the fight will boost boxing, which he thinks will in turn boost DAZN.

“We try to break down some of the barriers. We’re a bit of a disruptor in the industry, we’re obviously a sports streaming service, the first true global one. We recognize that in particular in boxing there’s a lot of silos between different broadcasters and different promoters, especially in the U.S. Our goal is to make sure boxing gets the proper coverage and gets as much spotlight as possible. We believe everybody covering boxing is good for boxing, and if it’s good for boxing, it’s good for DAZN.”