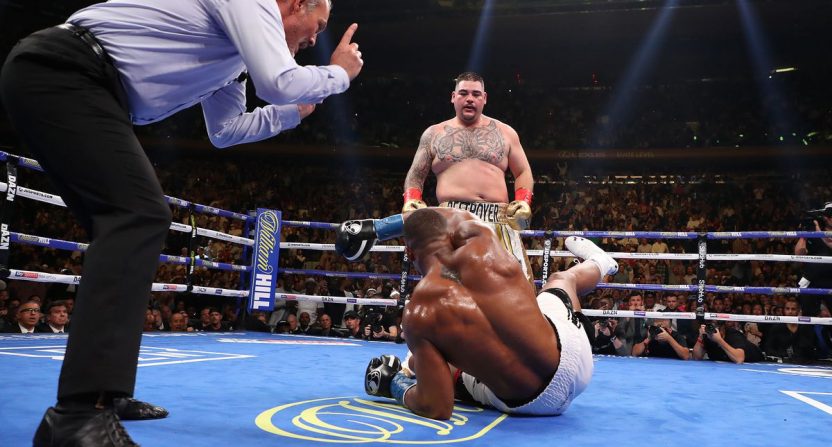 Perhaps the most-anticipated fight of the year — a rematch of the historic (no, truly, historic) heavyweight upset of Anthony Joshua by Andy Ruiz, Jr. — marks a fitting occasion for broadcaster DAZN to make its inaugural foray into the boxing documentary landscape.

(Note: This is the documentary that DAZN released on YouTube on Thursday night)

“ONE NIGHT: JOSHUA vs RUIZ” debuts Thursday evening, and it’s a fairly conventional offering. Well, conventional for documentaries, as opposed to conventional for boxing documentaries. Those who have seen the game-changing “24/7” series on HBO that popularized the format by playing a huge role in boosting the pay-per-view sales of Floyd Mayweather vs Oscar De La Hoya in 2007 will scarcely recognize it as the kind of doc the sport has been pumping out ever since.

“ONE NIGHT” isn’t, like 24/7 and its imitators, about omniscient cameras implanted in boxers’ homes and training camps and largely free of talking head interviews, with a narrator’s voice, imbued with gravitas, spouting poetic observations and/or purple prose. Which, in its own way, is refreshing.

So how do we measure it, then, besides its formula?

If we measure it as mere storytelling, as a recounting of a truly momentous evening, it measures up solidly, but not spectacularly.

For those who missed it earlier this year, the (no way to say it nicely) chubby Ruiz came in as a 15:1 underdog against the #1 heavyweight and one of the top two or so worldwide stars of the sport, the sculpted Joshua. When the documentary describes it as an upset unlike any seen in the division since Mike Tyson vs Buster Douglas, it’s not just about DAZN selling the rematch: it’s, at minimum, arguably true. (Lennox Lewis vs Hasim Rahman was a 20:1 affair, but Rahman was at least ranked in the top 10 in the division by Ring Magazine, whereas Ruiz was not ranked in the top 10 by the since-formed Transnational Boxing Rankings Board, of which this writer is a co-chair).

Which is to say, DAZN starts with a canvas that would be difficult to mar. And it doesn’t mar it. It rarely strays into the kind of hyperbole common to what is essentially promotional footage masquerading as a true doc. One exception: A commentator described Ruiz as “cannon fodder,” but the more appropriate description comes later, when Ruiz is described as a “showcase” fight for Joshua. Ruiz was an underdog, but a credible fighter. Few thought he’d win, but many thought he could give Joshua some trouble, at least.

The music is a highlight. It matches the dramatic turns of Joshua vs Ruiz and gets you into the moment. Tyson as one of the talking heads — more on the star-studded cast later — is particularly effective at selling the excitement of the evening. His voiceover kicks off the show with a David vs Goliath metaphor that could’ve been cliched, except for where Tyson — who knows from David and Goliath — takes it.

Which is not to say it doesn’t make some odd choices. There is no more foreshadowing of what actually transpired that night beyond a gray-bearded Tyson’s remarks. Ruiz’s name isn’t even mentioned until seven minutes in. It may be a trope of presentations that you tell them what you’re going to tell them, then tell them, then tell them what you told them, but it’s a trope that would’ve come in handy here. Unless you already know the story, you’ll be wondering where this linear tale is taking you.

If we measure it as conveying information, then, it falls short there and in some other places, even as it largely gets it right. Ruiz himself doesn’t speak until 34 minutes into the 38 minute running time, and we only get three brief quotes from him thereafter. Joshua doesn’t appear until the actual final minute. It’s not that we needed to hear from them to make it a good doc; you could do it all from the standpoint of the spectator. But when the various talking heads are speculating on what Joshua was feeling at this moment or that, why not just, y’know, ask him then put it in the flick?

At one point, Sylvester Stallone comments something to the effect of “What was the ref thinking?” when he allowed a stumbling Joshua to continue. And yet, referee Michael Griffin appears in the documentary both before and after, offering commentary on other things. Why not, again, ask Griffin himself?

If we measure it as hype for the rematch, which it is even as it maintains its air of documentary authority, it also does so admirably but not exceptionally. Besides Tyson and even his conqueror Douglas, the cast includes Sylvester Stallone, Michael Strahan, “Sugar” Ray Leonard, Evander Holyfield, Gerry Cooney, and Dolph Lundgren. Every die hard boxing fan will already be watching. They don’t need this to push them. Giving the normies some stars to do the hype has a chance of luring them.

Airing it for the first time at 11 p.m. on a Thursday is a curious choice, especially given that DAZN is a product of London, but maybe it doesn’t matter all that much with a network that exists only on the internet. Yet it also wouldn’t be the first time boxing shot itself in the foot with  peculiar time slots — that boxing for this century so far and even well before mostly confined itself to the weekends when people are out drinking and carousing is the kind of self-defeating behavior we long-suffering boxing fans have come to expect.

This review is, admittedly, a bit damning with faint praise. But it’s an A-OK start, and in a sport littered with disasters, that’s saying something. If you watch this, you will be moderately entertained. You will get a good story, competently told and often free of the laughable commentary that’s become endemic in an age of boxing promoters forging exclusive alliances with networks (DAZN and Matchroom agreed to an eight-year, $1 billion deal in May of 2018, leading to in-fight analysis that veers transparently toward the promoter’s preferred narrative). And it’ll stir the blood a little to see Ruiz vs Joshua 2 when it airs Dec. 7. Mission accomplished, if nothing else, with room to grow.