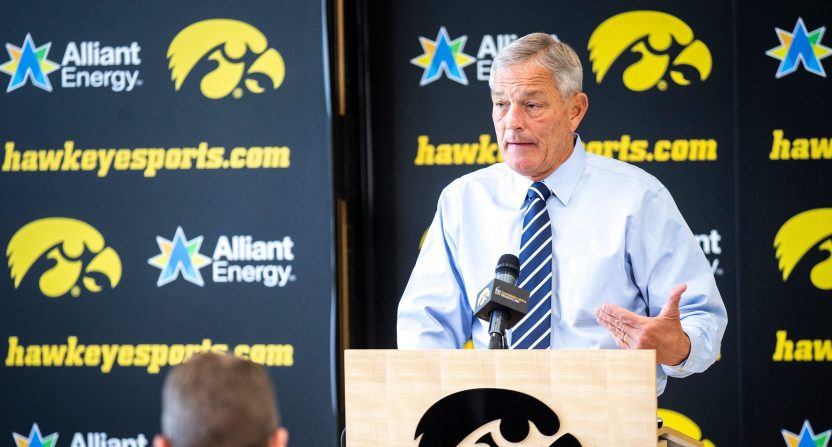 To say that the 2022 Iowa Hawkeyes football offense has left people with a lot of questions would be an understatement. However, as we learned over the last week, head coach Kirk Ferentz doesn’t really like being asked any.

Ferentz, who has been Iowa’s head coach since 1999 and recently signed an extension to stay there through 2029, is about as secure as any college football coach in America. That’s been put to the test this season as the Hawkeye’s offense has been inept on a level that few FBS programs have showcased in decades. Whenever they do score an offensive touchdown, it’s cause for mock celebration, especially since most of the time their playcalling and execution look downright dreadful.

It’s gotten to the point where Iowa fans are wearing their team’s futility like a badge of shameful honor.

A fair summation of the Iowa offense experience. pic.twitter.com/dqRqy9B50W

Much of the criticism has been laid, rightly, at the feet of Iowa offensive coordinator Brian Ferentz, whom you can probably guess is Kirk’s son. The nepotism loopholes that the Ferentz family had to jump through just to get Brian on the staff are well-documented and as asinine as you’d assume. That’s especially true now that the younger Ferentz is doing such a bad job that, were his last name anything else, he almost certainly would have been demoted or fired by now.

After the Hawkeyes were thoroughly trounced 54-10 by Ohio State last Saturday, the elder Ferentz lashed out at reporters over their questions about the state of the offense and what he intends to do about his offensive coordinator/child, some of which were asked by Doug Lesmerises of Cleveland.com, who has been critical of Ferentz and the Hawkeyes’ offense in his columns. While none of the questions he was asked rose above the level of “obvious given the situation,” the longtime head coach complained that he felt “interrogated.”

“I complimented the guys on Sunday during some of the interrogations that I experience on Saturday,” said Ferentz. “It dawned on me coming home that as bad as today was it could have been worse. I could have been that guy (while pointing at a media member), I could have had his job and acted like he did. Could’ve been a hell of a lot worse, right?”

Reactions were understandably not in Ferentz’s corner and the head coach apologized on Tuesday, saying that “maybe I deviated from [taking the high road], and I apologize for that. I don’t want to set a bad example for our guys.”

“I fully realize and appreciate the members of the media,” Ferentz said. “They have jobs to do. I answered several tough questions after the Illinois ball game (a 9-6 loss Oct. 8) and same thing on Saturday. So that’s part of the job. It’s not fun. I don’t have a problem with the questions, I just have a real problem with the tone. … I was not appreciative of the tone in which the question or questions were delivered, so I’ll stand by that.

“If anything else … it makes me appreciate my feelings toward the Iowa media. They ask hard questions, they do what they have to do, and I appreciate that and respect that.”

Yahoo! Sports columnist Dan Wetzel joined 92.3 The Fan’s Ken Carman on Friday to discuss Ferentz’s media reaction and he didn’t see any problem with the way the local media has been covering him.

“The questions were fine,” Wetzel responded. “I listened to the tape. Completely respectful. This is what the fans wanna know. Doug’s not an Iowa fan. He works for Cleveland.com. He’s asking questions about how the hell you have a team in the Big Ten with an offense that bad. In that game, they ran a fake punt. They ran four yards, got tackled, it was failed. Ran four yards. Those four yards on that failed fake punt run represented half of their total offense.

“They are absolutely awful, and you have your son,” Wetzel continued. “(Lesmerises’) questions were exactly what every single Iowa fan or every person stunned watching Iowa this year going what the heck is this, this is the worst offense I’ve ever seen. How — this many years in — do you have this much dysfunction? And oh my, your son is the coach. He doesn’t have the qualifications to be a Big Ten offensive coordinator. It’s his last name.”

Wetzel noted that if there is an issue here, it’s that the longtime head coach with a fat contract and hefty buyout has just gotten too comfortable with never being questioned in any kind of strong way.

“I don’t think he’s ever been asked a tough question, right? It’s just like ‘Ok’. He lives in Iowa,” Wetzel said. “There’s barely any media, and this is the only team so no one really challenges him. So good for him for getting challenged.”

If Ferentz isn’t happy with the way his team and son are being criticized now, he has a decent chance to silence critics for at least one week as the Hawkeyes host the 1-6 Northwestern Wildcats this weekend. But their offense continues to falter and they end up missing out on a bowl game this season, it will be pretty impossible for him to ignore the calls from the media and fans alike to make a change, whether he feels interrogated or not.