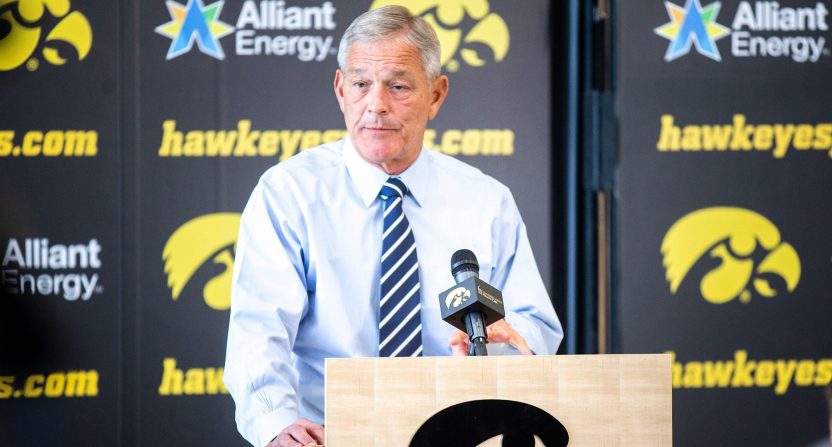 Iowa Hawkeyes head coach Kirk Ferentz apologized Wednesday for accusing the media of “interrogating” him, a rant that also saw him belittle a reporter.

Speaking on his weekly radio show, Ferentz apologized, but also made it clear he didn’t appreciate the tone of some of the questioning after Iowa’s 54-10 loss Saturday to Ohio State.

“I always preach to our guys and encourage our guys to take the high road,” Ferentz said (via The Athletic). “So maybe I deviated from that, and I apologize for that. I don’t want to set a bad example for our guys.”

During his Tuesday media conference, Ferentz complimented his players for how they handled media questions after the loss. Then he said, “It dawned on me coming home that as bad as today was it could have been worse. I could have been that guy (while pointing at a media member), I could have had his job and acted like he did. Could’ve been a hell of a lot worse, right?”

Ferentz’s comments came in the wake of an article penned by Doug Lesmerises of Cleveland.com which was critical of Ferentz and the Hawkeyes’ offense.

“I fully realize and appreciate the members of the media,” he said. “They have jobs to do. I answered several tough questions after the Illinois ball game (a 9-6 loss Oct. 8) and same thing on Saturday. So that’s part of the job. It’s not fun. I don’t have a problem with the questions, I just have a real problem with the tone. … I was not appreciative of the tone in which the question or questions were delivered, so I’ll stand by that.”

“If anything else … it makes me appreciate my feelings toward the Iowa media. They ask hard questions, they do what they have to do, and I appreciate that and respect that.”

Here’s what Kirk Ferentz said tonight on his radio show (which is also televised in Iowa City/Cedar Rapids via @KCRG 9.2) pic.twitter.com/qYwb3hJPc2

It’s been a tough year for Ferentz and the Hawkeyes, who are now 3-4. There have been calls for Ferentz to fire the team’s offensive coordinator, his son Brian, to help jump-start the sagging offense.

A season ago, Iowa reached as high as No. 2 in the AP poll before finishing 10-4.

Arthur spends his free time traveling around the U.S. to sporting events, state and national parks, and in search of great restaurants off the beaten path.

View all posts by Arthur Weinstein