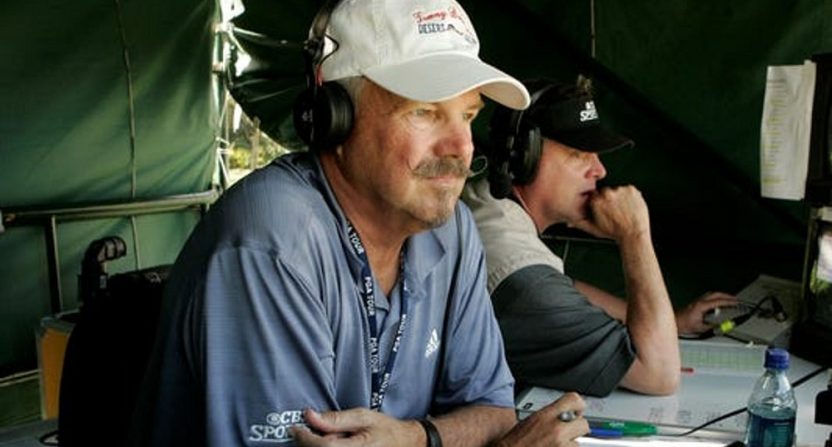 CBS Sports recently made the decision to part ways with two of their longest-tenured sports broadcasters – golf announcers Gary McCord and Peter Kostis. Between the pair of them, they had 60 combined years of experience working for CBS’s golf coverage. Kostis served in a variety of roles as a hole announcer, analyst, and on-course reporter, but was most well-known for his slow-motion breakdowns of player swings. McCord has always been one of the most unique and colorful personalities in golf broadcasting and beyond, and brought his trademark sense of humor to the traditionally reserved telecasts.

And yet, CBS Sports decided to part ways with the long-time duo by not renewing their contracts. The news came as a shock because of Kostis and McCord’s longevity at CBS, and the fact that these kind of sweeping changes aren’t often made in the golf broadcasting world.

What won’t come as a shock is that the outspoken McCord has already made his displeasure known about being let go by CBS in comments to Golf Digest. He didn’t hold back in expressing his thoughts about the situation:

“This is not how I would have preferred to see it end,” McCord said. “I’m going on 72. I’ve been doing this for 30-odd years. I knew I was coming to the end of the deal, but I was going to go out on my terms. That’s not happening now.

“Bottom line, they fired me.”

“He [McManus] tells me, and he told Peter the same thing, that ‘We think CBS golf is getting a little stale, and we need to go in another direction,’ ” McCord told Golf Digest by phone from his home in Scottsdale. “I’ve been called a lot of things, but one thing I’ve never been called is stale.”

McCord also expressed his frustration in not being able to say goodbye after commentating golf events for CBS since the late 1980s. CBS invited Kostis and McCord to announce the first two events for CBS of next year’s tour schedule, but the pair declined.

Known for his irreverence that eventually got him dropped from the network’s coverage of the Masters beginning in 1994, McCord said he doesn’t mind getting fired, “but when you tell me I’m really doing well, when you tell me, ‘Oh, you’re so good for our brand and helping our brand,’ when you tell me you love everything that I’ve done for the golf coverage over the years—and he [McManus] said I’m doing fantastic—and then in the next breath, you say you’re firing me? And I’m thinking, OK, why are they doing this? ”

McCord, a former PGA Tour player and winner of three PGA Tour Champions events, is smarting over the decision mostly because he didn’t have a chance to personally thank all his CBS teammates behind the scenes who have supported him through the years, people who have become like family. “You just don’t do something like this,” he said. “You shouldn’t do it this way. No chance to say thanks to the viewers, to all my CBS friends? That’s what you get for 35 years?”

According to Golf Digest, CBS is considering former Masters champion Trevor Immelman and brother Mark to become part of their golf coverage. Both Immelman brothers have broadcast experience with Golf Channel and PGA Tour Live. CBS Sports did confirm the addition of former PGA Champion Davis Love III, although it’s not clear if he will be in the booth or an on-course reporter.

It’s understandable that CBS would want to work in some fresh faces for their golf coverage, and Love and the Immelmans should do well for the network. All sports telecasts can benefit from some fresh perspective mixed in with experienced voices. However, one can’t help but feel some sympathy for McCord and Kostis quietly being pushed aside after so many years of service. It’s a shame that a 30+ year relationship would end in bitterness and that the situation couldn’t have been resolved sooner, so that McCord and Kostis could have a chance to be recognized on the air and say their goodbyes.

For what it’s worth, McCord also hinted at making an appearance at what would be his spot at the famously rowdy 16th hole at Phoenix for the Waste Management Open next year, so this story may not be over just yet.